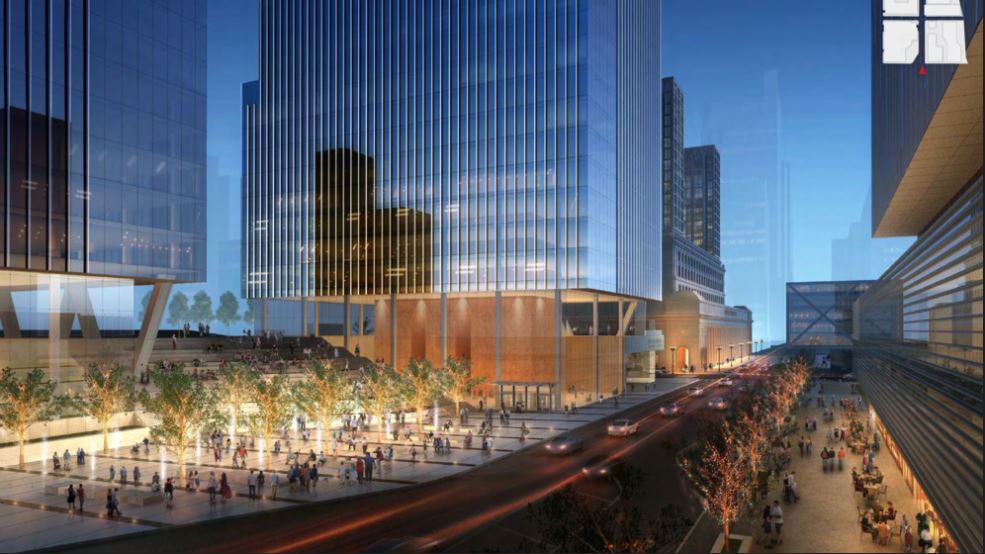 On May 25, 2017, Amtrak President and CEO Wick Moorman, Chicago Mayor Rahm Emanuel, and other officials announced the selection of locally-based Riverside Investment & Development to lead the long-awaited (with many false starts along the way) redevelopment of Chicago Union Station (CUS). The team will revitalize the commercial elements of the station, as well as neighboring Amtrak-owned properties.

“This agreement will generate thousands of jobs and ensure a more vibrant future for Union Station and the entire city of Chicago,” Mayor Emanuel said. “The thorough planning process with Amtrak and the many partners involved in this historic endeavor will ensure this plan generates the greatest economic impact and benefits the entire region and nation.” 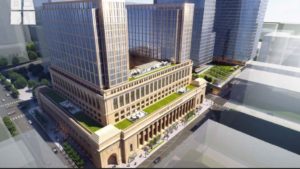 “This building was envisioned by Daniel Burnham in the 1909 Plan for Chicago as the city’s primary rail station. It is in that spirit we have big plans for both this Headhouse building and nearby properties owned by Amtrak,” said Moorman. “We have initiated real estate developments such as this to create revenue streams to invest in our core business, to improve facilities, to provide amenities to all users of the station – and to attract new ones. We are certain we will do that here in Chicago.”

The proposed commercial development will total approximately 3.1 million square feet at full build-out. The developer expects to create approximately 7,500 construction jobs over the life of the more than $1 billion project, as well as an additional 7,000 to 8,000 permanent jobs.

Phase Three – Plaza and Tower on Southeast Corner of Jackson and Canal:

The designation of Riverside to develop the commercial elements of Union Station follows the City’s commitment to modernize and transform the transportation infrastructure though the Amtrak Chicago Union Station Master Plan process. 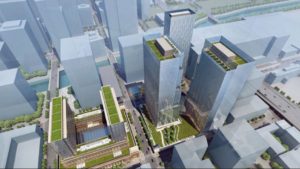 The commercial aspects of the project do not require any Federal, state or local funding and will be considered by the City of Chicago Plan Commission, Landmark Commission, Zoning Committee and City Council.

The Amtrak Board of Directors this week approved the designation of a master development team led by Riverside. This designation is based on a staff recommendation and follows a rigorous technical and financial review, assisted by KPMG, AECOM, and Savills Studley. The Board also approved finalizing financial negotiations with this developer by the end of the year.

In addition to a competitive review process, Riverside and its partners were selected due to their extensive experience in successfully developing complex, transportation-oriented, mixed-use properties.

“We are honored to have been awarded the opportunity to revitalize the commercial aspects of Union Station,” said John O’Donnell, Chief Executive Officer of Riverside Investment & Development Co. “Adapting such an iconic building and transportation hub that serves so many is a responsibility we take very seriously. We look forward to working with Amtrak and our partners to make Union Station and the blocks around it into assets that serve and excite Chicago residents and commuters alike. This will be a transformative project for the West Loop and the City.” 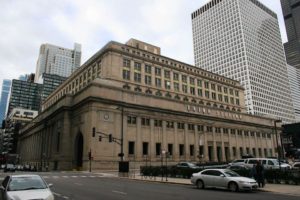 Previously, Amtrak, the City of Chicago, Metra commuter rail and the Regional Transportation Authority (RTA) were involved in reviewing teams considered capable of all aspects of project delivery. This group of agencies has been working on conceptual planning and design work for a series of projects at Chicago Union Station.

That work follows a Master Plan that the City of Chicago completed in 2012. The designated developer will harmonize commercial development with the need to address growing passenger volumes at CUS, and to successfully integrate the station into the surrounding West Loop neighborhood.

The Master Developer will also engage the community and incorporate feedback from West Loop stakeholders into any development plan.

The Master Development process in Chicago is part of a larger corporate program to leverage the substantial Amtrak asset portfolio and also includes stations in New York City, Philadelphia, Baltimore, and Washington D.C.