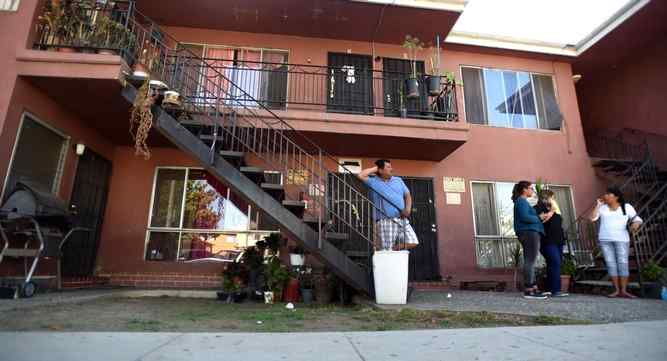 A one-room apartment in a 1963-built Linden building in Long Beach, California goes for $795 a month. A studio in the building next door fetches $1,650 a month.

As the landscape of the neighborhood changes, residents in the Linden building such as Paula Lopez, who sells handmade tamales and lives with another adult and three kids, fear new property ownership will translate to rising rents and eventual eviction, as investors in the area look to spruce up buildings and collect more money from higher-income tenants.

Lopez’s building sold earlier this year. “We have major concerns that they’re suddenly going to kick us out,” Lopez said through a Spanish translator.

The scene continues to play out in neighborhoods throughout the downtown area of Long Beach, with repeating dialogue overheard in Santa Ana, Santa Monica, Oakland and other cities. Officials prefer to talk about the wonders of “development and revitalization,” while affordable housing advocates bemoan “gentrification and displacement.”

Josh Butler, executive director of the nonprofit Housing Long Beach, is conversant in the debate.

“If you stand from a position of wanting to increase your tax base, it’s great,” Butler said. “If you stand from a position of being a low-income resident who’s been living in Long Beach for 30 years, you see displacement. The building seller wins. The person who bought the building is the winner, if they play their hand right. But the tenant is the loser.”