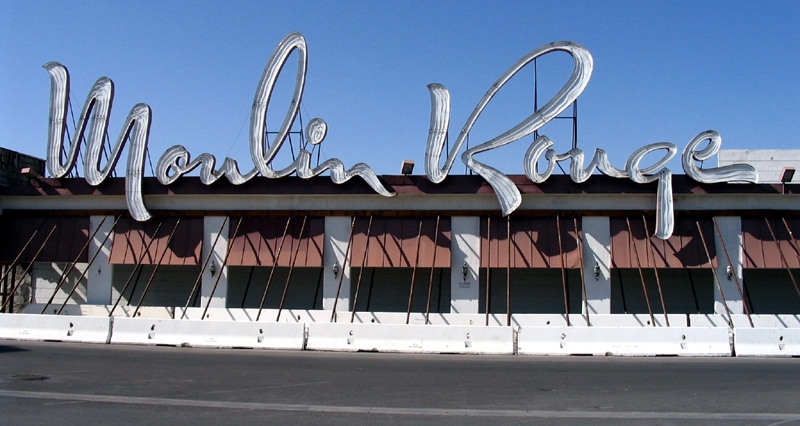 Where did Sammy Davis Jr. spend his nights, while the rest of the Rat Pack lived it up in the whites-only hotels on the famous Strip of Las Vegas, Nevada? At the Moulin Rouge, a hotel and casino located in the historically African-American West Side of the city.

The Moulin Rouge Hotel is listed on the U.S. National Register of Historic Places. The first desegregated hotel casino, it was popular with many of the black entertainers of the time. They would entertain at the other hotels and casinos, but stay at the Moulin Rouge. It was named after the famed Paris nightclub. 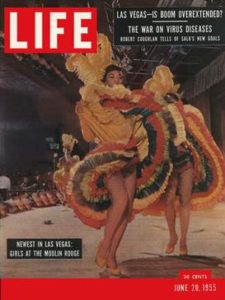 The Moulin Rouge is one of the 16 stops along the Pioneer trail and is an important landmark for African American people. It opened at a time when blacks and whites were separated by law until 1960. It provided jobs, business, and entertainment and was the center of African American Cultural activities. It was shut down through a police action and many members of the African American community who have not rebounded still feel the pain of racism are hoping to bring back the pride and the economics that the Westside once enjoyed.

The original Moulin Rouge boasted a 500-seat showroom, casino, and shopping center in a resort style setting that would help attract locals and visitors to the planned Las Vegas Historic District becoming the center of family entertainment in Las Vegas. Central to the Moulin Rouge success and the redevelopment is a proposed transportation system connecting the district to the downtown, to airports, stadiums, hospitals, and universities.

In late November of 2017, local citizens score a major win for tourism in Las Vegas to rebuild the Moulin Rouge, after a long battle to save it from both the wrecking ball and inappropriate uses.

Former Nevada State Assemblyman Harvey Munford, Chairman of Ward 5 Chamber of Commerce, said he was pleased, optimistic and thankful that the community joined together for the overall good of Historic West Las Vegas. Commissioner Lawrence Weekly agreed with him to call a Moulin Rouge town hall meeting instead of passing the project back to the City.

Mr. Munford and his team at Harrison House went on a full court press to defend against the ill-considered plans to build family services offices at the landmark site. The Chamber has been pivoting several private developers and assisting those would share the vision for training, a better neighborhood environment with jobs, economic development and tourism.

“A slam dunk for the Chamber is to make it possible for everyone to be a part of the project and not just a chosen few. We are striving to get letters of support from the City for the reconstruction of the historic landmark. We need an economic engine, and the Moulin Rouge’s non-restricted gaming license still has value”, Mr. Munford said, “adding that preservation of African American history is the end goal.”

Plans are to create a Historic District centered on the Pioneers Trail where Commissioner Weekly and Yvonne Atkinson Gates laid the foundation years ago. Historic places will be promoted along the trail by creating a world class “Walk of Fame” on the Historic Westside that honors pioneering families, civil rights leaders, churches, entertainers, community citizens, entrepreneurs, politicians, educators, and athletes, etc. who have impacted the City.

Featured photo by Bentai via Wikipedia.