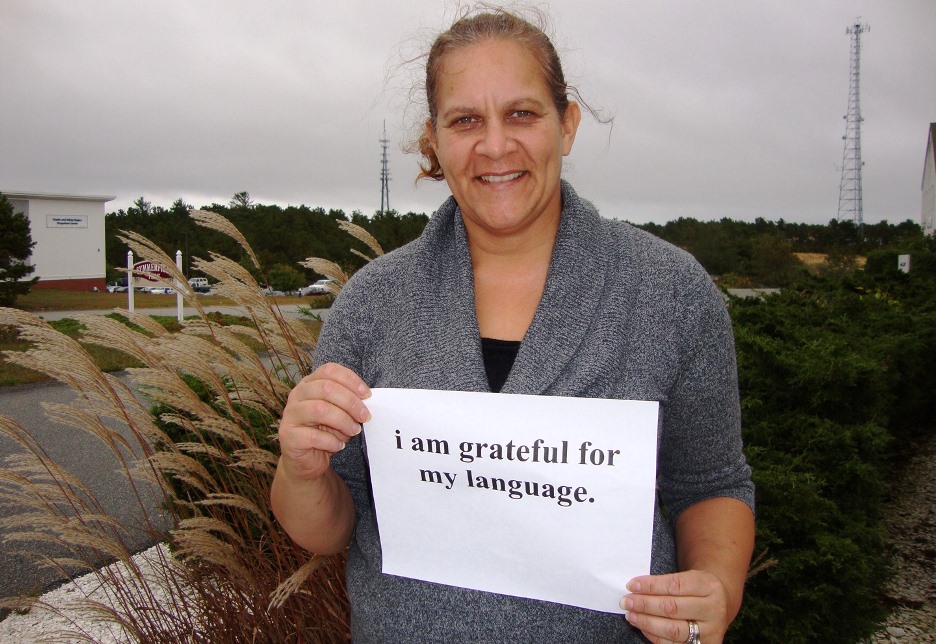 In a classroom on the main floor of the Mashpee Wampanoag tribal resources center, a dozen or so toddlers are speaking a language that until a few decades ago had no living speakers.

This is the language of the Wampanoag Nation, the first language of Massachusetts. The fact that these children are learning it is due to a movement that began with one woman, Jessie Little Doe Baird, whose office is down the hall.

Baird’s success at creating a layperson’s handbook of grammar and compiling a working dictionary was unprecedented. “It’s about fixing what happened,” Baird said of her life’s work. “It’s about making whole what was broken.”

In articles about Baird, and there have been many, her feat is usually portrayed as a completed triumph. The stories usually talk about how Baird won a MacArthur Foundation “genius” grant in 2010. They describe the Wampanoag language — called Wôpanâak or Wôpanâôt8âôk in its own modified alphabet — as “resurrected.”

Except languages don’t live in dictionaries; a language is truly alive only when spoken in a community, and that’s an ongoing process.

Jessie Little Doe Baird has a master’s degree from the Massachusetts Institute of Technology, where she studied with Dr. Kenneth L. Hale. Jessie resides in Mashpee, Massachusetts. According to Wampanoag prophecy, a Wampanoag woman would leave her home to bring back the language and “the children of those who had had a hand in breaking the language cycle would help heal it.”

In 1993, Baird began teaching the Wôpanâak language at tribal sites in Mashpee and Aquinnah. She is featured in a PBS documentary on language revival, “We Still Live Here – Âs Nutayuneân”, directed by Anne Makepeace. She also serves as the Vice-Chairwoman of the Mashpee Wampanoag Indian Tribal Council.

“We are here,” they said. This sacred message was given to jessie “little doe” baird in Wôpanâak during the same dream for three nights in a row. During the dream she saw the same circle of faces…faces of her ancestors. At that time, she knew nothing of her people’s language but little doe wondered if the words were in Wampanoag, the language of her ancestors.

Thus began a journey that, through the joint collaborative efforts of the Mashpee, Aquinnah, Assonet & Herring Pond Wampanoag communities, led to the birth of the Wôpanâak Language Reclamation Project (WLRP), a project that, after more than 150 years of dormancy, is bringing back to life the tribes’ sacred privilege and right — their ancestral language.

The Mashpee Wampanoag Tribal Language Department was established in cooperation with the Wôpanâak Language Reclamation Project (WLRP) on June 10, 2009 to recognize the role of language as “central to the protection of the customs, culture, and spiritual well-being of the people,” and to acknowledge the “critical state of the newly reclaimed Wampanoag language, and the need to secure its survival for the benefit of future generations.”

The department is a unit of the Cultural and Historic Department. The Tribal Council reaffirmed its commitment to language revitalization in resolution 2011-RES-025 to recognize the inherent “birth right of each Wampanoag child adult to speak his or her language given by Creator”, and the decades of work by WLRP to return language home to Wampanoag families.

See full article in Boston Globe by S. I. Rosenbaum.