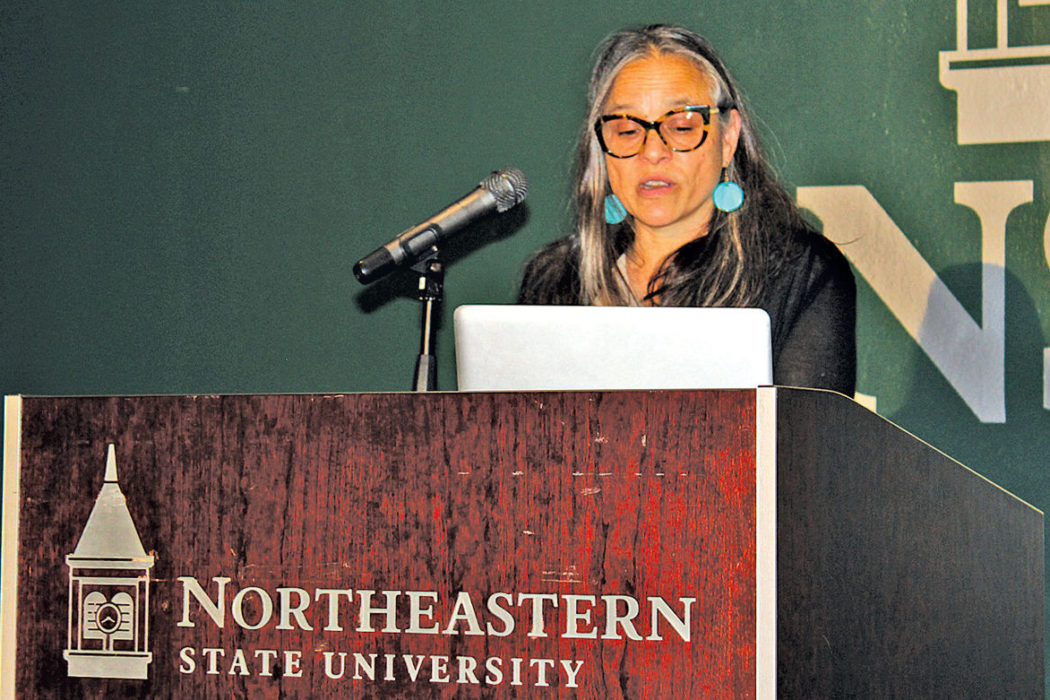 As the 44th annual Symposium on the American Indian continues through this weekend on campus, Northeastern State University is hosting the Revitalizing Endangered Languages Conference.

To kick it off, Mary Hermes, associate professor of curriculum and instruction at the University of Minnesota, on Friday gave a presentation called “Enchanted with the Modern: Why Revitalization Is Not Just About Looking In the Past.”

Hermes works with the community at the Waadookodaading Ojibwe Language Immersion School to revitalize the language, and spoke of the importance of language and its significance to culture.

Brad Montgomery-Anderson, associate professor of Cherokee and Indigenous Studies at NSU, said Hermes was invited because of her experience with language, communities, and revitalization.

Montgomery-Anderson said NSU has always put a priority on language; there are only four degree programs in the U.S. in indigenous language, with NSU offering one.

At Arizona State University (ASU), Navajo is not only a language that may be learned through classes; it’s a way for students to reconnect to their culture.

Teaching classes in Navajo is also helping to revitalize what is now classified as a dying language, said Jolyana Begay, an American Indian Studies instructor who teaches beginner and intermediate Navajo classes.

“I really feel that it is my duty, my role as a speaker of the language to ensure its existence and teach to our future generations. It makes me happy that students take a very strong interest in the language,” Begay said.

The Center for Indian Education at ASU, created 51 years ago as a research, teaching and outreach effort, works with the Navajo Nation, Gila River Indian Community, and others in the state.

There are about 175 to 200 Native American languages still spoken in the United States said Teresa McCarty, the co-director for the Center for Indian Education at ASU.

Of those languages, only about 20 are still being passed down to children as first languages. Most of these Native American languages are spoken by individuals beyond childbearing age — many of them elders over age 65 — putting the languages at risk of being permanently silenced.

Once a language becomes silent, unless it has been well documented through video and audio recordings, it is extremely difficult for that language to be spoken in its original form.

See 2010 article on the Center for Indian Education at ASU.