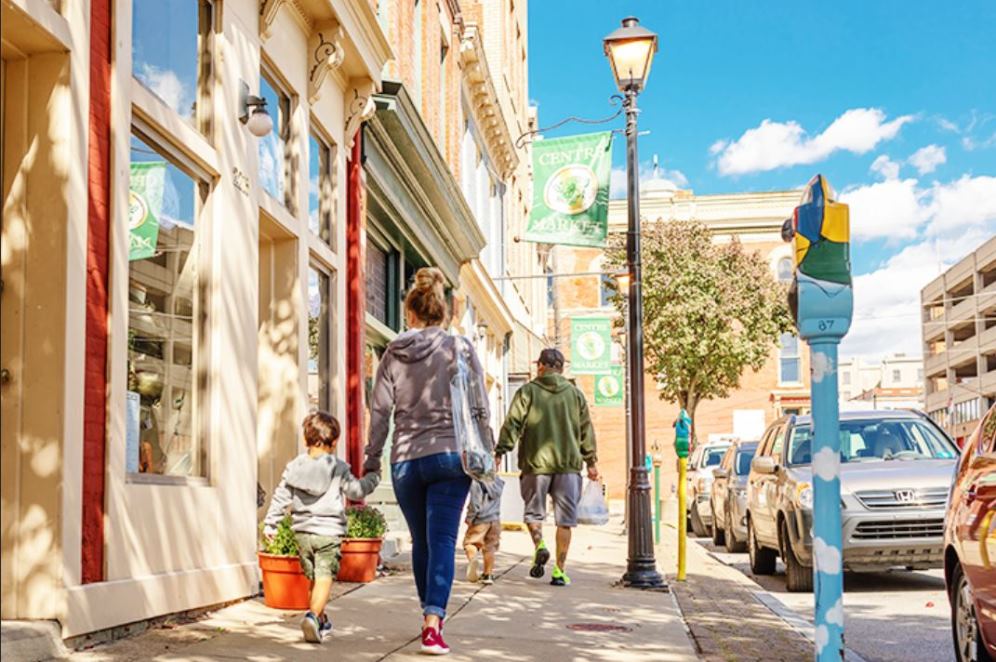 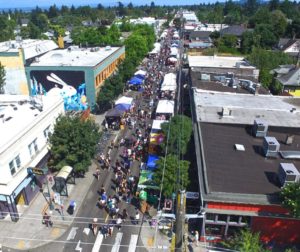 Alberta Main Street is being recognized for building a thriving and equitable Main Street that reflects the diversity of their district.

“Alberta Main Street serves as a model for neighborhoods in cities that are struggling to retain their character in the face of new development, gentrification, and displacement,” said National Main Street Center CEO and President Patrice Frey. “Alberta has been able to grow its local economy without sacrificing the heritage and historic character that make this arts district unique.”

Known as a vibrant working-class and commercial district in the 1950s, Alberta Main Street suffered from decades of disinvestment and exclusionary lending practices. In the 1980s, gang activity reached unprecedented levels, and Alberta had become, as one television reporter stated, “the most killing street in Portland.”

Community development efforts began in the 1990s, and Alberta Main Street formed in 2010 to continue the momentum while addressing the threat of losing the diversity and creative culture of the community. Over the past nine years, Alberta Main Street has flourished while remaining committed to inclusion and shared prosperity. Forty-four new businesses have started since 2010 and job opportunities have nearly doubled—from 696 in 2010 to 1,375 in 2018. 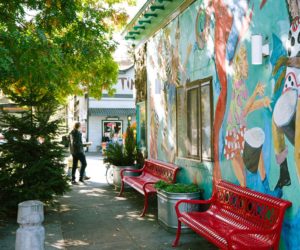 “Alberta Main Street is at the forefront of helping small businesses and entrepreneurs succeed, balancing historic preservation with new infill, and creating an inviting and welcoming district for all,” said Sheri Stuart, state coordinator of Oregon Main Street. “They are a credit to our state program and an example for Main Streets across the country.”

Alberta Main Street has worked diligently to create an inclusive commercial district by offering programs that encourage small business development and property ownership among residents who have been historically marginalized from economic growth.

“Alberta Main Street is taking serious steps to provide a more inclusive approach toward success for all members of the community, including those who have been displaced by rising housing costs,” said Elise Scolnick, long-time Alberta Street resident, activist, and Alberta Street Board member. “This means reaching outside of the neighborhood to those who once lived here, and asking them back into the fold. Through dialogue, cultural representation, and prosperity initiatives, which are in planning and implementation phases, Alberta Main Street wants to embrace both the heritage and future of our community.”

That future is bright if you look around Main Street today. Alberta is lined with locally-owned businesses, public art, and unique shops and galleries. Residents and visitors are flocking to Main Street. Last year, events, programs, and activities drew 30,000 people to the district, with an estimated economic impact of over $5 million. Between 2015 and 2016, 60 percent of Alberta Street businesses reported an increase in revenue, and 40 percent planned to expand operations.

Alberta Main Street owes much of its success to its determined leader and ambassador for their Main Street— founding Executive Director Sara Wittenberg, who passed away in August 2018.

“I am truly honored to become the Executive Director of Alberta Main Street just a short time before this significant award,” said Ann Griffin, Alberta Main Street Executive Director. “It is a real tribute to my predecessor’s hard work, and to the dedication of the neighborhood leaders and volunteers who make this Main Street a success. We work to maintain Alberta as a place where all feel welcome, and where arts-inspired and community conscious projects can grow real roots.” 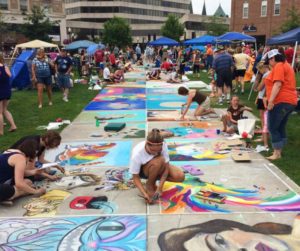 Wausau River District is being recognized for becoming an impressive arts and culture destination with engaging public spaces and a booming local economy.

“Wausau River District has set an example for communities across the country that are looking to cultivate sustainable, long-term revitalization in their downtown,” said Patrice Frey. “They have shown what’s possible if you invest in public spaces, expand partnerships and collaborations, diversify funding sources, and launch programs that respond to the needs of your community.”

Before Wausau River District formed in 2002, this north central Wisconsin downtown faced a decade of blight and competition from big box stores, resulting in a constant flight of local businesses. Between 2002 and 2010, Wausau River District advocated for new developments and redesigned wider and more walkable streets. These efforts, combined with bringing in nearly $120 million in public and private investment, have sparked a true transformation. Downtown Wausau’s vacancy rate has dropped from 13 percent to 3 percent since 2002, and residential development has swelled.

“Wausau River District has consistently been a leader in district revitalization,” said Errin Welty, Interim Wisconsin Main Street Program Coordinator and Downtown Development Account Manager for the Wisconsin Economic Development Corporation. “The strong engagement from the property owner and business community, together with the strong relationship with municipal government, have fostered an atmosphere of innovation and creativity. While the River District has always been an employment hub and shopping destination, it is also increasingly attracting overnight visitors and permanent residents that appreciate the district’s ample dining, nightlife, and recreation amenities.”

Located along the Wisconsin River, Wausau has focused on developing unique public spaces and special events that showcase the character and natural beauty of their downtown. Wausau River District implemented a series of placemaking strategies to jumpstart these efforts, including placing painted pianos, murals, public art displays, and an umbrella art installation downtown.

Wausau River District also hosts 100 special events each year in downtown, ranging from concerts to art fairs, drawing over 72,000 visitors annually. The crown jewel of Wausau is the 400 Block, a centrally-located park completed in 2011 with a covered stage that hosts dozens of events annually, as well as a skating rink, snow slide and splash pad.

“I’m beyond proud of our community’s focus on improving the quality of life for our residents, through the creation of public spaces, community events, expansion of walking/biking trails and the vast amount of cultural and historical offerings that make our downtown so vibrant any time of the year,” said Blake Opal-Wahoske, Executive Director of Wausau River District.

Wausau River District’s efforts have spurred significant economic growth. In the past four years, they have introduced 47 new programs, events, and services with a total estimated economic impact that ranges from $8 to $13.5 million. 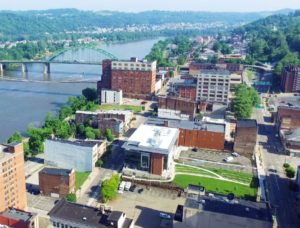 “In only a few years, Wheeling Heritage has changed the narrative around what is possible for their downtown,” says Patrice Frey. “Wheeling Heritage has brought significant economic opportunity to their Main Street, harnessed the neighborhood’s historic character, and helped residents believe in the future of their community.”

Located along the Ohio River, Wheeling experienced significant disinvestment in the 1980s and 90s as retailers went to suburban shopping malls and major local industries suffered losses. When Wheeling’s Main Street program launched in 2015, their downtown’s vacancy rate stood at 32 percent. Now, after generating nearly $50 million in total investment downtown, the vacancy rate has decreased to 15 percent and 124 buildings have seen improvements.

“We’ve been successful because we are cognizant of the ever-changing nature of our community. While we’ve taken great strides, our work isn’t done,” said Alex Weld, Project and Outreach Manager at Wheeling Heritage, who oversees Wheeling’s Main Street program. “We continuously evaluate and adapt our programming to address pressing needs in the community, which we feel is the best way to help Wheeling continue to flourish.”

Thanks to a growing downtown shopping, dining, and arts scene, anchored by the iconic Capitol Theater and Centre Market Historic District, more people are living in downtown Wheeling than ever before. Once vacant buildings, including a warehouse and former department store, have been transformed into unique living spaces. While there were no multi-family market-rate apartments in 2015, there are now 100 new multi-family, market-rate units in Wheeling’s historic downtown.

Wheeling Heritage has also worked to cultivate a strong small business community. From launching a live community crowd-funding event for new business ideas called Show of Hands, to bringing an international entrepreneur training program to assist new business owners, Wheeling Heritage has been creative in their approach to community-based economic development. These programs have yielded positive results. Over the past three years, their downtown has added 37 net new businesses.

“It’s an honor to receive national recognition for the impact of our work,” said Jake Dougherty, Executive Director of Wheeling Heritage. “While all of us here in Wheeling see the progress the city has made, it’s always nice to see people outside of the city recognize our progress and potential. Although we were selected for work that has been done in the past four years, this is built off decades of effort by many people.”

Main Street West Virginia Coordinator Nikki Martin echoed Dougherty: “Wheeling is an outstanding example of how West Virginians can work together to achieve downtown revitalization and improve quality of life. Under the leadership of Alex Weld and Jake Dougherty, and with phenomenal support from the board, volunteers, businesses, community, and local government over the years – you see the amazing results that come when people come together to love their downtown.”