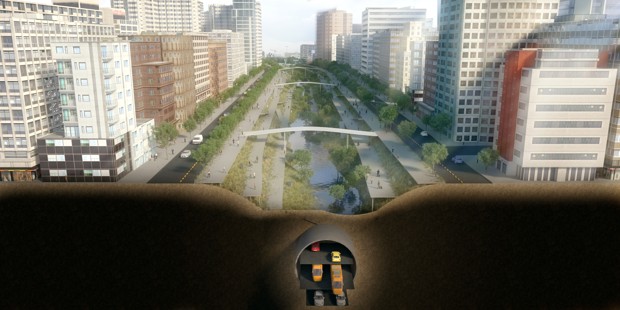 Millions of vehicles drive over the Piedad River in Mexico City every day.

Paved over in 1942, what was once one of the biggest rivers in the area now flows under the Miguel Alemán Viaduct, a major east-west highway.

Traffic at peak times is so bad that cars average a speed of six kilometers per hour—less than four miles per hour.

But now, a group of experts is arguing that the solution to the traffic chaos is to return to the past, tearing down the overpass and reopening the river to the light of day.

This group of academics, designers, urban planners, environmentalists, and artists have been pushing for seven years to transform Mexico City by rescuing all of the 45 now-covered rivers in the capital’s Anahuac watershed.

The first phase would involve uncovering about 9.3 miles of the Piedad River, now part of a drainage network.

“This project shatters paradigms. It proposes to tear down a private road, which you cannot use unless you have a car. What we propose is that we remove the cars, open the pipes, and treat the water. We need to transform the model of our city,” says urban biologist Delfín Montañana.

“It’s not just possible. It’s necessary. The city grew against itself when it encased rivers in pipes and polluted them. We must reconfigure the city for a more symbiotic relationship with the forests and rivers,” says architect Elias Cattan, another Rio Piedad renovation project supporter.

It has happened in other cities. Seoul, South Korea, recovered the Cheonggyechon River, which had been covered by a highway. And cities like Singapore, Madrid, Los Angeles, Portland, and Caracas all have initiatives to recover rivers.

Note from Storm: Of all the world’s mega-cities, Mexico City is my favorite. My wife is from DF (“DF”, for “Distrito Federal”, is the equivalent of referring to Washington, DC as “DC”), and we spend at least a month in Mexico every year, usually with at least a few days in Tenochtitlán (the Aztecs’ name for the city they founded). So, I’m very happy to see this proposal to restore the city’s rivers. Water is a magic revitalizer, and Mexico City has a great paucity of water features. That’s probably its single greatest weakness as an urban place.