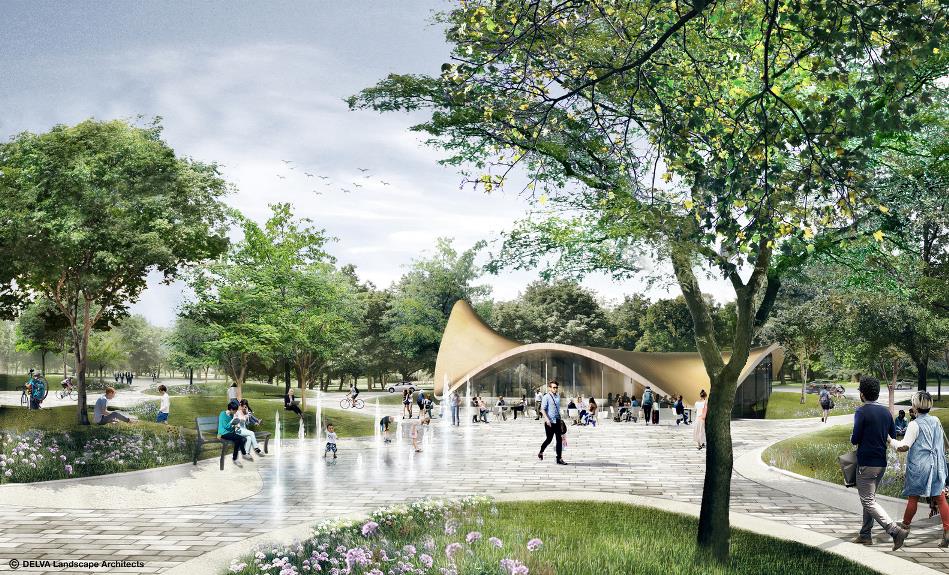 First impressions are important, especially those of historic city centers, upon whose health many metropolitan regions depend. Would your city center benefit if the first thing visitors saw was an interconnected series of parks and paths? Some folks in The Hague, Netherlands think so.

Netherlands-based DELVA Landscape Architects / Urbanism has presented their design and plan for “The Green Entrance”: a revitalized new gateway to the historic center of The Hague, as part of the City Entrances program. 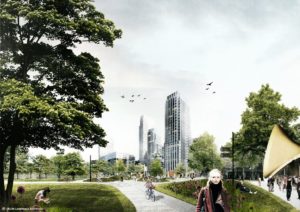 The Hague has already committed to densifying the heart of the city, which will involve the building of some 50,000 new home. The Green Entrance aims to ensure that this redevelop effort is as green and sustainable as possible. The want to integrate the city’s urban revitalization strategy, using “an integral approach between landscape design, cultural heritage, mobility, programming and technology.”

Commenting on the project’s primary function, the DELVA architects say: “The Green Entrance connects areas that have been isolated over the years. It starts in the spacious and open ‘City Hall’ that connects to the train station and continues to the ‘Koningin Julianaplein’. No narrow doors or gates, but a wide view over the green and lively surrounding public space.”

The Hague has the ambition to add 25.000 new houses to the inner city by 2025. Thereafter another 25.000 will be built. About 10.000 of them will be built in the surroundings of ‘The Green Entrance’, e.g. in the Central Innovation District. 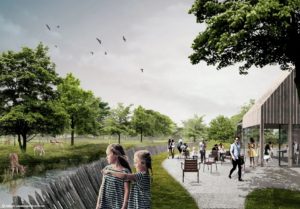 This district, with the central station as vibrant heart, functions more and more as a hub of knowledge intensive activities in the Netherlands (headquarters of international companies, international institutions and centers for higher education). Increasing density, together with maintaining the business climate, goes hand in hand with improving sustainability and greening the city. The vision for ‘The Green Entrance’ has the responsibility to enable densification in The Hague and to strengthen the business climate.

The Green Entrance connects areas that have been isolated over the years. It starts in the spacious and open ‘City Hall’, that connects to the train station and continues to the Koningin Julianaplein. No narrow doors or gates, but a wide view over the green and lively surrounding public space. The square offers both a place of orientation, as a pleasant place to stay or transfer. The square continues to the historical ‘Koekamp’ that is surrounded by the new Koninklijk Stadspark, a lush green park that exposes the variety of the city and also forms the gateway towards the national park, The Hague Forest.

Close to The Green Entrance are many governmental agencies, embassies and NGOs, the Provincial House, the Museum District and the centre of The Hague. Besides an infrastructural node, this entrance is also a symbolic gateway to the city. ‘The Green Entrance’ is a warm welcome to the thousands of commuters, visitors and tourists from in- or outside the country that arrive to The Hague via the central station. Starting from the impressive ‘City Hall’, they will feel the elegance and international allure of The Hague, the city on the coast and the legal capital of the world.

Four entities form The Green Entrance: the Koningin Julianaplein, the Koekamp (deer camp), the Koninklijk Stadspark, and the Malieveld. Together an ensemble of green spaces enclosed by the typical avenues of The Hague. 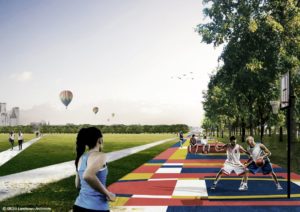 People leaving the station will pass through the impressive ‘City Hall’, with it’s unique ceiling that refers to peace and justice, that contains high quality bars, restaurants and retail facilities, and will be build according to the design of Powerhouse Company and DELVA Landscape Architects / Urbanism. The square and the ‘City Hall’ form together a green entrance for many commuters using public transport. The new green city square starts under the ‘City Hall’ and slowly blends in with its green surroundings. Strengthening the relation between the park and square creates a big green public space at the base of the central station, that invites to meet and be active. The new pavilion is the hart of the square and activates the space.

After the restoration of the Koekamp, they will add green dunes to the ensemble of square and park. These will create a spatial interaction between both. No lifted planters on top of the new underground bicycle parking (8.500 bicycles), but flowing park elements that are the first sign of the sandy dune landscape.

The green ensemble of the Haagse Bos, Malieveld, and Koekamp has always been an important element of the city of The Hague and it is the oldest city park of The Netherlands. The Koekamp is designed by the famous Dutch landscape architect J.D. Zocher, Jr. in 1839, and parts of his design are still recognisable. In time, the elements of the green ensemble got isolated and lost their connection with the city and the Haagse Bos. The plans of DELVA Landscape Architects restore the coherence between this elements and by this, restore honor. This creates a coherent city park that reaches from the Utrechtsebaan until the Prinsessengracht, with the Koekamp as heart of the green ensemble. 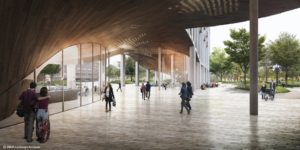 The pavilion on the Koningin Julianaplein is located on a strategic location. By positioning the pavilion in the northeast corner, the square is enclosed on eye level. In addition, because of the distance between the two high-rise buildings, the pavilion is located perfectly to receive the afternoon sun. Because the pavilion is located just outside the main building, there is a chance to create a place for social activity just outside the station. Away from the busy and hectic train station, but right in the center of the major public transportation hub of The Hague. An attractive public space with a terrace in the sun that activates the square and turns it in a space of activity en social interaction.

The park pavilion, designed in the same style as the pavilion on the square, contains a small cafe and is situated just aside the new harbour. It is located in the corner of the city park and functions as an eye-catcher from the Berlagebrug. The pavilion marks the entrance of the city and functions as a hospitality pavilion. Its contains a diverse program, like a cafe, ticketing for the sightseeing boats and as a tourist information point.

The home base of the National Forest Management Agency is located in the heart of the Koekamp, currently hidden by the shrubs of the deer camp. DELVA integrates this place in the redesigned historic park of Zocher and restores its historical structures. By this, the base of the National Forest Management is suddenly located inside a park, on an island and surrounded by water. The island will function as a recreational stepping stone from the city center to the Haagse Bos.

By covering a part of the Utrechtsebaan and introducing paths for slow traffic, the Koekamp and the Haagse Bos will be connected for cyclists and pedestrians. In addition, a slow traffic bridge over the Utrechtsebaan will connect the Koekamplaan with the Haagse Bos, which will restore the historic royal axis between Huis ten Bosch and Paleis Noordeinde.

The Malieveld is a big open space that is used as a manifestation field and is surrounded by a historic green frame of trees. DELVA adds an interesting element: the Malie Sport Track. The location where the Malie Games used to be played, is transformed to a unique element that facilitates many types of sports. The historic function is reintroduced and many different sports can be played on the ‘Track’, that is a art piece on itself.

The inspiration for the design of the Malie Sports Track is taken from the most famous piece of Mondriaan, Victory Boogie Woogie. The new Track reintroduces art in the public space and will introduce digitalization on the Malieveld. This is done by using lightning that reacts on movement on the field or an app for the phone that enables people to create the desired public space that fulfills their needs for that specific moment.

The Hague (Den Hague, in Dutch) is on the western coast of the Netherlands, and is the capital city of the province of South Holland. With a population of 520,704 inhabitants and over 1,000,000 inhabitants including the suburbs, it is the third-largest city of the Netherlands, after Amsterdam and Rotterdam. The Rotterdam/The Hague Metropolitan Area, with a population of approximately 2.7 million, is the 12th-largest in the European Union and the most populous in the country.

The Hague is the seat of the Dutch government, parliament, the Supreme Court, and the Council of State, but the city is not the capital of the Netherlands, which constitutionally is Amsterdam. Most foreign embassies in the Netherlands and 150 international organisations are located in the city, including the International Court of Justice and the International Criminal Court, which makes The Hague one of the major cities hosting the United Nations, along with New York City, Geneva, Vienna, Rome, and Nairobi.