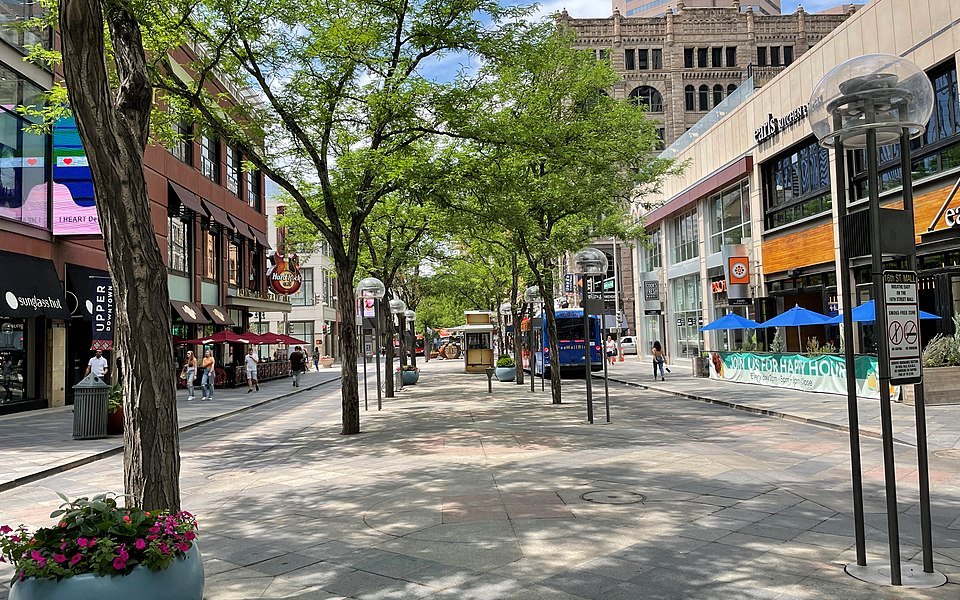 The 16th Street Mall is a pedestrian and transit mall in Denver, Colorado, and is one of America’s most successful long-term downtown revitalization projects.

The mall is 1.25 miles (2 kilometers) long, running along 16th Street in downtown Denver, from Wewatta Street (at the beautifully restored and revitalized historic Union Station) to the intersection of 16th Avenue and Broadway (at Civic Center Station).

The intricate granite stone sidewalks and streets were designed by famed architect I.M Pei to resemble the scale pattern of the Western Diamondback Rattlesnake. It is home to over 300 stores, 50 restaurants, and the Denver Pavilions shopping mall.

Before the mall was built, downtown Denver experienced rates of bus congestion, especially on 16th and 17th streets, where more than 600 bus trips per day operated in 1970s, creating both air pollution and traffic congestion.

The design of the area also discouraged pedestrian activity. The solution proposed by the downtown Denver business community and the Regional Transportation District (RTD) was to build two bus transfer stations at either end of 16th Street and connect the two with a pedestrian mall that would include a free transit shuttle bus service.

The final design was drawn up by I. M. Pei & Partners, in collaboration with the urban design and landscape architecture firm, OLIN.

Construction was funded by a $75 million grant from Federal Interstate Highway Transfer Funds and the Federal Urban Mass Transit Administration, with RTD providing a local match.

It took crews two years to install trees, lights, and granite pavers along the mall. The mall opened on October 4, 1982, and over 200,000 people attended the opening day ceremonies. 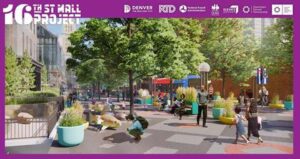 Artist’s illustration of the future 16th Street Mall, showing pedestrians in the amenity zone and the new granite pavers in the historic pattern. (courtesy of City of Denver)

The goal is to ensure that the downtown’s main street remains a destination that Denver residents and visitors can enjoy for decades to come.

The project will address deteriorating infrastructure to improve safety and mobility, while creating new opportunities for public use and enjoyment.

Highlights of the 16th Street Mall project include:

Small business support made possible by a $1M allocation in the city’s 2022 budget to ensure businesses thrive during the renovation. Project Background

Initial planning studies for the 16th Street Mall began back in 2010 and over the years have included input from hundreds of Denver residents.

In 2019, the city gained approval from the Federal Transit Administration to move forward with a preferred alternative that reconfigures the layout of the Mall by eliminating the center median and moving the free MallRide Shuttles to run parallel in the center of the Mall, creating wider sidewalks and a new amenity zone area for increased activation of the outdoor space for enjoyment by all.

The City and County of Denver selected PCL Construction Services as the design/build firm to carry out the 16th Street Mall Project.

PCL’s $149 million design/build contract is funded through a mix of local, state, and federal funds, including voter approved Elevate Denver bond funds and contributions from partners including the Denver Urban Renewal Authority, Colorado Department of Transportation and Federal Transit Administration.

The 16th Street Mall Project is a component of Denver’s overall financial plan for an equitable and sustainable economic recovery and is anticipated to support more than 1800 jobs, generate more than $155 million in income for workers, nearly $380 million in sales for businesses and have a regional economic impact of as much as $4 billion throughout the duration of the project.

Access to stores and businesses will be maintained throughout the project while work is underway.