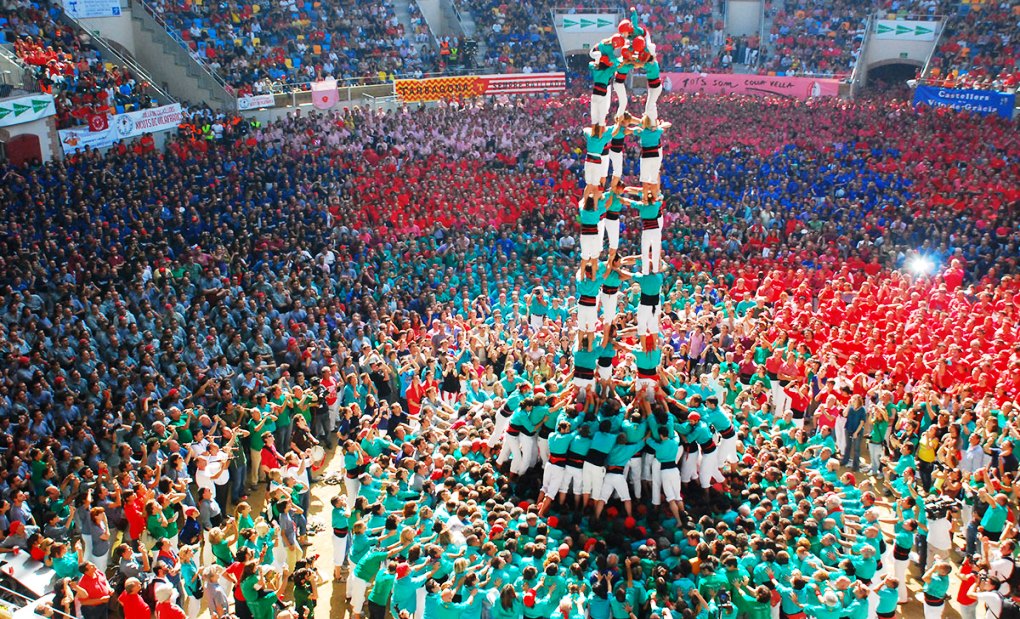 A castell is a human tower built traditionally in festivals at many locations within the Spanish province of Catalonia. 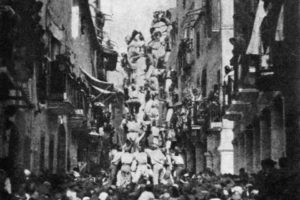 A castell around the end of the 19th century.

At these festivals, several colles castelleres (groups who construct towers) often succeed in building and dismantling a tower’s structure.

On November 16, 2010, castells were declared by UNESCO to be amongst the Masterpieces of the Oral and Intangible Heritage of Humanity.

But the bloody Spanish Civil War from 1936 to 1939—which overthrew the democratic government of Spain—almost killed the castell tradition. 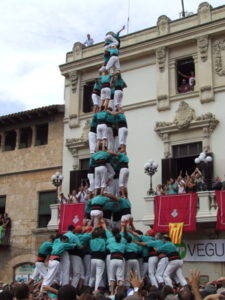 The repressive right-wing dictatorship of General Francisco Franco (openly backed by the U.S. government) had no tolerance for the traditions of any of the countries and cultures (like the Basque) who were forced at gunpoint to become part of Spain, as was Catalonia (Catalunya in Catalan).

The transition back to democracy generated significant changes in Catalan social life, including the resurgence of popular street festivals and celebrations and the formation of twenty-three castells groups.

It became a modern practice, in urban settings instead of just rural ones. Team members gained social prestige, and they went through a process of internal democratization, allowing women in the groups for the first time.

They were also professionalized, with regular team practices and a study of technique. A growing number of groups also began to receive economic support from their towns. 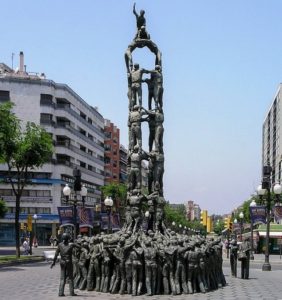 Castellers monument in Tarragona (by Dietmar Rabich via Wikipedia)

These changes meant that castells are now thriving.

Previously seen only in southern Catalonia, the tradition is now practiced in the entirety of the country and has become one of most representative Catalan cultural practices.

Today, some 15,000 people in more than 100 groups practice all across Catalonia.

Its transformations demonstrate the power of the Catalan culture to evolve and adapt to new social circumstances, bringing together tradition and modernity.