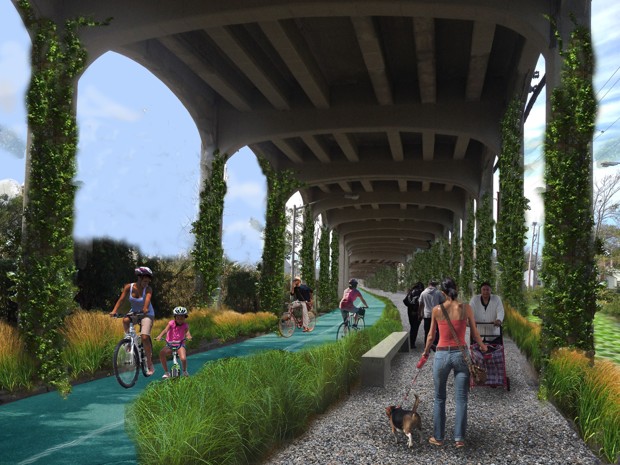 The High Line gave new hope to abandoned elevated structures across the United States, to the point that more or less every city wants something like it. But the public spaces beneath active elevated road and rail beds remain at best largely underused, and at worst dark and dusty corridors of neglect.

These areas are hardly scarce: there are some 700 miles of elevated transport structures in New York City alone, and ten times that in all America.

Today the New York-based Design Trust for Public Space, which jump-started interest in the High Line with a 2002 report, has released a massive new mission paper called Under the Elevated, which hopes to do the same for the areas beneath road and rail infrastructure across the city.

The report, done in partnership with the NYC Department of Transportation, is the result of a two-year study into these spaces. It calls them “el-spaces.”

Under the Elevated goes on to outline some 130 pages worth of design ideas for reclaiming these “untapped” public assets. Some reflect on the success of actual pop-up installations; others remain in the very conceptual phases. The Design Trust and DOT say they’re actively developing several of the projects.

This article highlights six cases for New York and other cities with elevated corridors to consider: