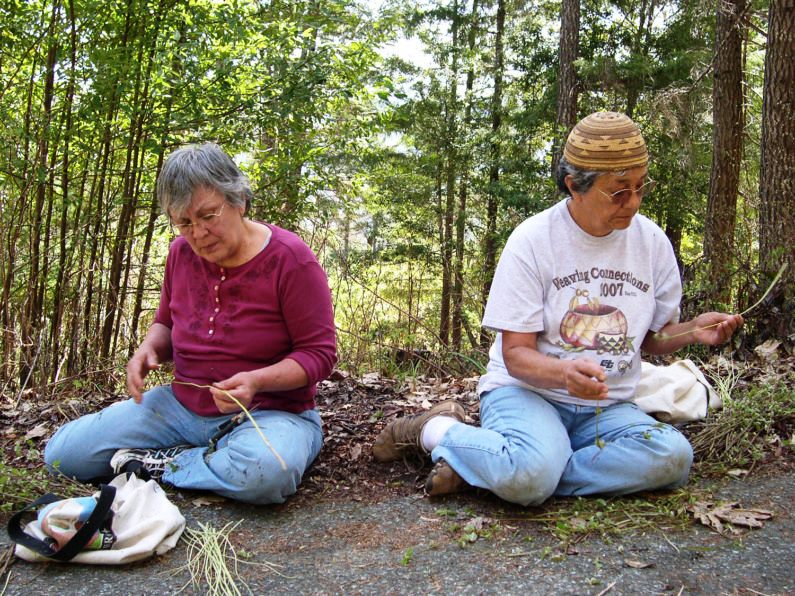 It costs more than a new iPhone XS, and it’s made out of hazelnut shrub stems. Traditional baby baskets of Northern California’s Yurok and Karuk tribes come at a premium not only because they are handcrafted by skilled weavers, but because the stems required to make them are found only in forest understory areas experiencing a type of controlled burn once practiced by the tribes but suppressed for more than a century. 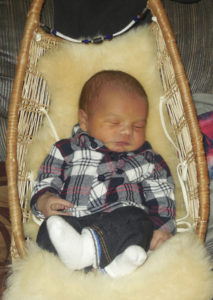 A new Stanford-led study with the U.S. Forest Service in collaboration with the Yurok and Karuk tribes found that incorporating traditional techniques into current fire suppression practices could help revitalize American Indian cultures, economies and livelihoods, while continuing to reduce wildfire risks. The findings could inform plans to incorporate the cultural burning practices into forest management across an area one and a half times the size of Rhode Island.

“Burning connects many tribal members to an ancestral practice that they know has immense ecological and social benefit especially in the aftermath of industrial timber activity and ongoing economic austerity,” said study lead author Tony Marks-Block, a doctoral candidate in anthropology who worked with Lisa Curran, the Roger and Cynthia Lang Professor in Environmental Anthropology.

“We must have fire in order to continue the traditions of our people,” said Margo Robbins, a Yurok basket weaver and director of the Yurok Cultural Fire Management Council who advised the researchers. “There is such a thing as good fire.”

The study, published in Forest Ecology and Management, replicates Yurok and Karuk fire treatments that involve cutting and burning hazelnut shrub stems. The approach increased the production of high-quality stems (straight, unbranched and free of insect marks or bark blemishes) needed to make culturally significant items such as baby baskets and fish traps up to 10-fold compared with untreated shrubs.

Previous studies have shown that repeated prescribed burning reduces fuel for wildfires, thus reducing their intensity and size in seasonally dry forests such as the one the researchers studied in the Klamath Basin area near the border with Oregon. 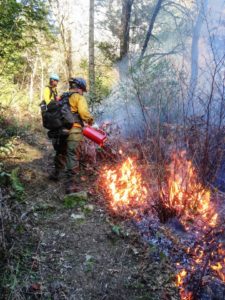 A broadcast cultural burn for hazelnut stems on the Yurok reservation.Credit: Tony Marks-Block

This study was part of a larger exploration of prescribed burns being carried out by Stanford and U.S. Forest Service researchers who collaborated with the Yurok and Karuk tribes to evaluate traditional fire management treatments. Together, they worked with a consortium of federal and state agencies and nongovernmental organizations across 5,570 acres in the Klamath Basin.

The consortium has proposed expanding these “cultural burns”—which have been greatly constrained throughout the tribes’ ancestral lands—across more than 1 million acres of federal and tribal lands that are currently managed with techniques including less targeted controlled burns or brush removal.

Tribes traditionally burned specific plants or landscapes as a way of generating materials or spurring food production, as opposed to modern prescribed burns that are less likely to take these considerations into account. The authors argue that increasing the number of cultural burns could ease food insecurity among American Indian communities in the region. Traditional food sources have declined precipitously due in part to the suppression of prescribed burns that kill acorn-eating pests and promote deer populations by creating beneficial habitat and increasing plants’ nutritional content.

“This study was founded upon tribal knowledge and cultural practices,” said co-author Frank Lake, a research ecologist with the U.S. Forest Service and a Karuk descendant with Yurok family. “Because of that, it can help us in formulating the best available science to guide fuels and fire management that demonstrate the benefit to tribal communities and society for reducing the risk of wildfires.”

The researchers write that it would be easy and efficient to include traditional American Indian prescribed burning practices in existing forest management strategies. For example, federal fire managers could incorporate hazelnut shrub propane torching and pile burning into their fuel reduction plans to meet cultural needs. Managers would need to consult and collaborate with local tribes to plan these activities so that the basketry stems could be gathered post-treatment.

Larger-scale pile burning treatments typically occur over a few days and require routine monitoring by forestry technicians to ensure they do not escape or harm nearby trees. As these burn, it would be easy for a technician to simultaneously use a propane torch to top-kill nearby hazelnut shrubs. This would not require a significant increase in personnel hours.

“These are fires with a purpose,” said Curran, who is also a senior fellow at the Stanford Woods Institute for the Environment. “Now that science has quantified and documented the effectiveness of these practices, fire managers and scientists have the information they need to collaborate with tribes to implement them on a large scale.”

Marks-Block will teach a course at Stanford this fall on the socio-ecology of fire. It will include field trips to a prescribed fire site in the Santa Cruz mountains and tribal prescribed fire training exchanges in the Klamath Basin area of Northern California.

The research was funded by the National Science Foundation, the U.S. Joint Fire Science Program, Stanford’s Department of Anthropology, the Stanford Office of the Vice Provost for Graduate Education’s Diversity Dissertation Research Opportunity and the Stanford School of Humanities and Sciences Community Engagement grant.

This article by Rob Jordan of the Stanford Woods Institute for the Environment originally appeared on the Stanford University website. Reprinted here by permission.