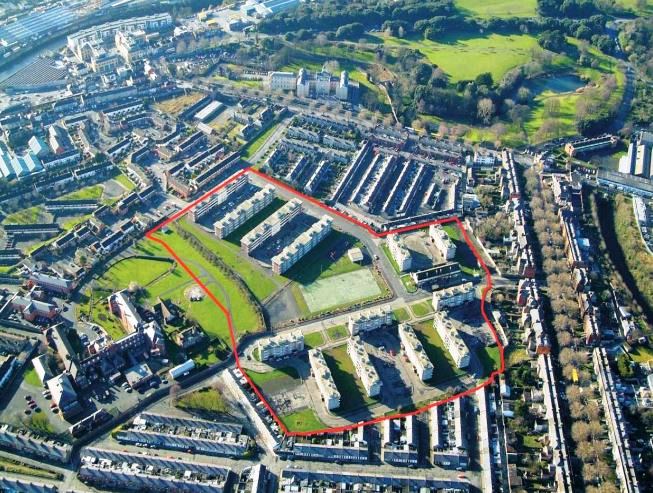 The O’Devaney Gardens public housing complex was constructed in Dublin, Ireland 1954 by the Dublin City Council. It originally consisted of a total of 278 residential units contained in 13 four-story blocks.

The site is located approximately 1km west of the city center off the North Circular Road. The site also includes a strip of land to the east which once formed part of the St. Bricin’s Military Hospital, acquired by the City Council to aid the delivery of housing. The entire site has an area of approximately 14 acres.

The adjoining site at Infirmary Road (c. 1.1ha) was once under the control of the Department of Defence and was home to both the Royal Army Medical Corps Barracks and the Royal Military Infirmary. The ownership of this site was transferred to DCC in 2006 for the purpose of repurposing the property as affordable housing in the city.

The northern half of this site contains a number of buildings of architectural and historical merit including the former Isolation Hospital built c. 1860 fronting Montpelier Gardens and the “married quarters” 3-story building fronting Infirmary Road.

Now, in August of 2017, the cost of that regeneration has been pegged at €125 million, and prospective developers are being sought by the Dublin City Council.

O’Devaney Gardens will be the first project developed under the council’s Housing Land Initiative to provide a mix of social, affordable rental and starter homes on State-owned lands. The council also plans to seek developers for sites it owns at Oscar Traynor Road in Coolock and St Michael’s Estate in Inchicore.

Image of O’Devaney Gardens courtesy of the Dublin City Council.

See article by Olivia Kelly in The Irish Times.