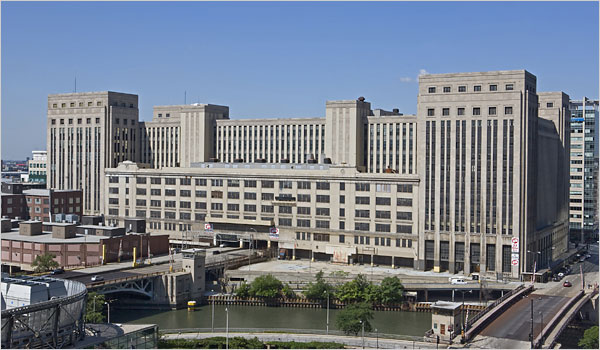 The city has notified the building owner of its intention to acquire the vacant property and solicit bids to redevelop it.

“Today’s action will accelerate the process of transforming the old Main Post office, which has sat empty for more than two decades, into an economic driver for the neighborhood and the entire city,” Mayor Emanuel said. “Development of this key gateway to the city can create thousands of jobs while rebuilding one of Chicago’s iconic structures.”

Closed by the U.S. Postal Service in 1995 and acquired by International Property Developers North America Inc. in 2009, the 2.5-million-square-foot post office and annex buildings have been vacant and deteriorating for decades. The city has notified the current owner of DPD’s intention to issue a Request for Proposals to identify a company to take over development of the site. The qualified developer would be required to fund the city’s acquisition of the property. The RFP will be released this spring and the process would conclude with the selection of a developer this summer.

Concurrently, the city is moving forward with seeking control of the 11.1-acre site through the eminent domain process. The Community Development Commission will consider both actions on March 8, before they move to the City Council for approval. No city funds will be used to acquire or redevelop the building. Depending on how the site is developed, the building could be eligible for historic tax credits and Class L treatment.

“The lack of redevelopment progress is unacceptable and the building’s ongoing obsolescence and blighted condition will make future rehabilitation more difficult,” Planning Commissioner David L. Reifman said. “As one of the largest buildings in Chicago, the post office complex represents a tremendous opportunity for new investment that could create thousands of permanent jobs and construction opportunities for local residents.”

Generally bounded by Van Buren, Canal, and Harrison streets and Chicago River, the property has been cited for more than 20 building code violations since 2012. Currently being monitored by the City’s Law Department in Circuit Court, the violations involve a variety of deteriorated building conditions; fire prevention inadequacies; issues with electrical, mechanical and exhaust systems; improper security standards; failure to perform critical examinations and properly maintain the building’s facade; accumulation of interior junk and debris; elevator issues; among other code infractions.

“The city needs to act now to leverage the current economic climate to provide a viable future for the building,” said Ald. Solis, who helped coordinate the current development rights for the building. “The RFP and acquisition process will make sure the building’s potential is realized on behalf of the neighborhood and the entire city.”

In July 2013, City Council approved a $1.5 billion redevelopment plan that included 2,150 residential units in the building and thousands of additional units, hotel rooms, and commercial spaces on adjacent land. Initial occupancy for the first phase of the project was projected for early 2015, however no significant redevelopment work has been completed to date. The initial phase was anticipated to create up to 10,000 permanent and temporary jobs.