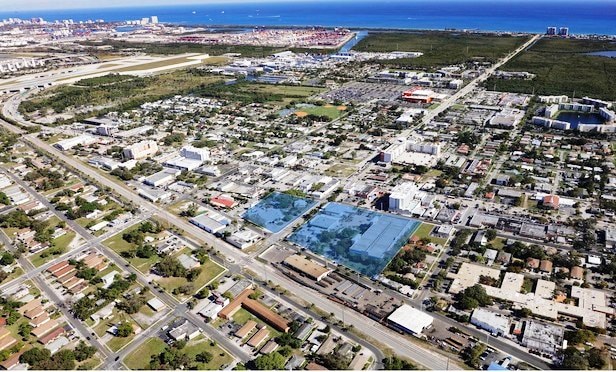 Notice is given that the City of Dania Beach, Florida, through Colliers International South Florida, is currently soliciting proposals from qualified, experienced development firms to re-develop the approximately six and one half (6.5) acres City Center Site.

The City is willing to contribute the site as part of an overall Public Private Partnership (“P3”) plan. The Site was recently appraised at $12,310,000. The site currently consists of the existing City Hall Building of approximately 29,000 SF together with a 440 space parking structure that is able to be expanded to 660 spaces by adding two floors.

The City is seeking to create a new City Hall and commercial complex as part of an overall vision to stimulate development in the City’s “Urban Core”.

In addition to the existing City Hall, which would be demolished as part of the plan, and rebuilt on the site, the property houses an existing fire station, and two small historic buildings, all of which the City believes can be relocated to other City owned property leaving the majority of the site available for a complete redevelopment. The existing parking structure can be utilized to serve the new City Center development. The County Library can stay as-is or be rebuilt on site as part of a government campus.

The City Center site is located a block west of the intersection of Dania Beach Boulevard and Federal Hwy (US1). The City is seeking proposals for a “Re-imagined City Center” by qualified developer(s). The intent of the City is to encourage private developers to use their entrepreneurial skills and financial resources to design and construct a variety of needed housing, retail, restaurant, and entertainment venues and possible office space. The City believes that a new City Center would create and stimulate a broader redevelopment of the entire “Downtown” Area and contribute to the Renaissance of Dania Beach. Under the City’s current City Center (CC) zoning regulations, using all available performance-based density bonuses and a maximum allowable building height of 14 stories, and leaving the existing parking structure in place, the site could technically accommodate approximately 1.4 Million square feet of new building space. This could allow a maximum residential development density of over 950 units to be designed and built in phases.

A new City Center Redevelopment should: 1) Jumpstart and stimulate redevelopment of the City’s Urban Core. 2) Provide an open canvas to developers for a multi-year phased development plan. 3) Significantly advance the City’s image and brand identity with a focus on sustainability. 4) Advance the City’s region-wide competitive position. 5) Address broader community and economic development needs and cultivate art and culture.

Documents may be obtained from www.demandstar.com, from the City Website at www.daniabeachfl.gov, or from Brooke Berkowitz, Senior Associate, Colliers International South Florida at Brooke.berkowitz@colliers.com or (954) 652-4633.

A Non-Mandatory Pre-Proposal Conference scheduled for 2:00 p.m. on Thursday, May 2, 2019, will be held in the NW Conference Room at Dania Beach City Hall, 100 W. Dania Beach Boulevard, Dania Beach, FL 33004. All Proposers planning to submit a Proposal are invited to attend this Conference.

Sealed proposals must include eight (8) copies, and one (1) electronic version on a CD or USB, in Adobe PDF format, of the required information and documents.

Sealed proposals must be received no later than 2:00 p.m. on Thursday, May 30, 2019. Proposals will be publicly opened at 2:30 p.m. in the NW Conference Room at City Hall, 100 W. Dania Beach Boulevard, Dania Beach, Florida. Proposal packets must be addressed and clearly marked:

The City Commission of the City of Dania Beach reserves the right to reject any or all Proposals, to terminate the process at any time (and recommence it at a later time from the beginning), to waive any informalities or irregularities in any submittal, to award in whole or in part to one or more respondents or take any other such actions that may be deemed in the best interest of the City.