In Florida, Miami-Dade County is offering approximately 17.0 contiguous acres of County-owned land within downtown Miami for private redevelopment via a long-term Development Agreement. Estimates are that the value of the associated projects could reach $10 billion.

The Development Site represents a combination of excess land and underutilized parcels formed from eleven (11) primary sites, the majority of which are improved and occupied with public uses that will need to be relocated and/or reconstructed in order to vacate the lands for development. 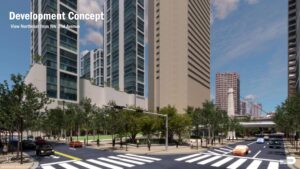 The Development Site will be subdivided into Development Pads which each represent an area of land on which improvements are intended to be constructed.

The Development Site, currently branded as “MetroCenter,” is part of a larger 28±-acre area which serves as the seat of the Miami-Dade County Government (Government Center), directly connected to the Metrorail Government Center Station and external transportation networks, at the center of the Miami urban landscape.

The County operates on a $9.5 billion budget and employs 26,000 full-time positions.

It operates under a home rule charter, allowing the political autonomy to plan and implement policies that are consistent with the best interest of the community. 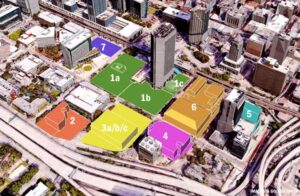 This redevelopment is being undertaken as part of the County’s continued commitment to excellence in governance for residents and businesses alike, leveraging the County-owned assets for both economic and social benefit.

As it exists in 2022, the Government Center is developed with approximately 3.3 million square feet of County-owned improvements including governmental office, courts, public parking and a modest amount of retail, of which 1.1 million square feet are located on the Development Site.

As repositioned, the Development Site could support between 17± and 23± million square feet of new development, subject to financial feasibility and market demand, to complement those governmental and public uses which will remain within the larger Government Center footprint.

The intensity, value and potential of the underlying assets allows the County to leverage the Development Site to address multiple challenges in our community, balancing highest and best use with social impact to bring both economic and societal reward to the community.

Although the RFP (strangely) has no deadline, the winning proposal is likely to be chosen in 2024, according to rumor.

All images courtesy of Miami-Dade County.