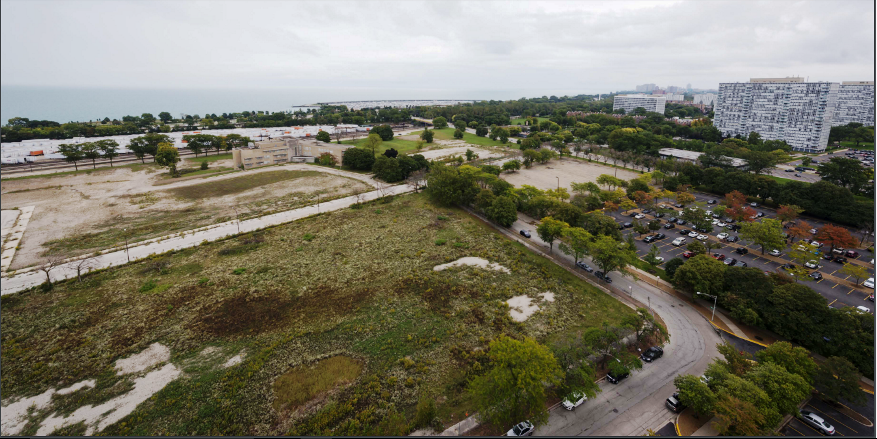 October 12, 2016 marked the start of the City of Chicago, Illinois’s search for a developer for the former site of the Michael Reese Hospital in the city’s Bronzeville neighborhood.

The site has been owned by the city since 2009, when it was envisioned as a potential Olympic village for the failed Chicago 2016 Olympic bid.

Now the city is looking for developers through a four-month long open request for proposals (RFP).

The sprawling Michael Reese Hospital first opened in the 1880s with a stated goal of serving anyone, regardless of nationality or race. The approximately 48.6-acre Michael Reese Site is located near Chicago’s lakefront, directly south of the Stevenson Expressway (I-55) and Lake Shore Drive (U.S. Route 41) interchange. A copy of the RFP may be downloaded below. Printed copies are available at DPD offices.

The Michael Reese Site is the former location of the Michael Reese Hospital and Medical Center. The hospital complex closed in 2008 and the City acquired the property in 2009. Today, only one building from the complex remains standing. The City’s preference is for this remaining building, the 72,800 square-foot Singer Pavilion, to be renovated and repurposed. The portion of the Michael Reese Site south of 29th Street has been cleared for unrestricted development by the Illinois Emergency Management Agency. The northwest portion of the Site requires remediation to address radioactive contamination resulting from a former carnotite reduction facility.

“The objective of this RFP is redevelopment of underutilized land in a manner which adds vibrancy to Chicago’s south lakefront communities, particularly Bronzeville,” a city document states. “The city and MPEA (Metropolitan Pier and Exposition Authority) are open to a range of uses, including commercial, institutional, tourism, entertainment, sports and recreational facilities, and residential.”

And Bronzeville will be watching warily. Some community leaders already worry the city might not be thinking big enough, saying they don’t want to see another collection of residential high-rises that don’t provide jobs or attract visitors.

In cooperation with the Metropolitan Pier and Exposition Authority (MPEA), DPD will also consider proposals that include MPEA’s 28.2-acre Marshalling Yards Site to the east, as well as 11 acres of privately owned land to the north, known as the Advocate/McDonald’s Site. The additional land is being included to provide for a broader range of proposed developments and site development configurations.

The Marshalling Yards Site provides parking, staging and trailer storage for McCormick Place. McCormick Place will need to retain the truck staging function of the Marshalling Yards Site but will consider development proposals that may include decking over a portion of the property and/or providing replacement facilities on the Advocate/McDonald’s Site. The Advocate/McDonald’s Site comprises six parcels owned by four owners and is improved with an Advocate Health Care facility, a McDonald’s restaurant and a United Storage facility. If the Selected Developer proposes to include the Advocate/McDonald’s Site in its development proposal, the Selected Developer must seek to acquire the properties through private negotiations with the current owners.

Respondents may submit proposals that are in accordance with existing zoning. Proposals that require amendments or zoning changes are also welcomed.

The city’s plan to sell the land to private developers has been in the works for some time and coincides with Chicago’s currently booming real estate market. According to Chicago Mayor Rahm Emanuel, the south side parcel offers a “once-in-a-generation opportunity” to transform the south side neighborhood.

The City anticipates that a new TIF may be created prior to the redevelopment contemplated by this RFP with boundaries matching those of the development proposal.

See article by Matthew Messner in The Architects Newspaper.