On August 30, 2017, the Michigan Land Bank Fast Track Authority announced that it is seeking proposals to purchase and redevelop the approximately 120-acre former Detroit House of Corrections property, changing the property from an eyesore to an important part of the growing Five Mile corridor, Director Josh Burgett said. 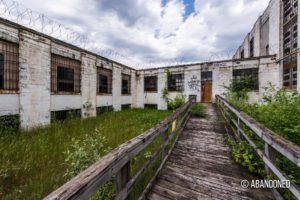 “Our primary mission is to take unproductive properties and return them to productive, tax-capturing use,” Burgett explained. “DeHoCo has been an eyesore; sitting unproductive for far too long. With the investment by the land bank and the work of Plymouth Township partners, we’ve created an opportunity to help the entire area eliminate blight and attract new business.”

The land bank acquired the property known as DeHoCo in 2015, and has been working closely with Plymouth Township Supervisor Kurt Heise and other local leaders. Demolition of the buildings began earlier this year with a $2.2 million investment as part of the authority’s process to prepare the site for sale and redevelopment.

“We’re turning this old eyesore into a regional engine for jobs and economic growth,” Heise said. “We’re bringing development and jobs to Plymouth Township, improving the quality of life for our residents.”

The former correctional facility sat vacant and deteriorating since 2004, limiting development in the growing area. The investment made by the land bank to remove the blighted buildings paved the way for the state to open a request for proposals period.

The vision for the property includes being part of the Michigan International Technology Center, an advanced technology business park in the Five Mile corridor in Plymouth Township. The MITC includes high-tech firms in the automotive and life-sciences sectors, recreation space and service business such as restaurants, supermarkets and day care centers that would cater to workers at those firms.

The Detroit House of Correction (DeHoCo), opened in 1861, was owned and run by the city of Detroit but originally accepted prisoners from throughout the state including women. The Detroit House of Correction was transferred to the state in 1986, renamed to Western Wayne Correctional Facility, and became a women’s facility for the rest of its life. It closed in December 2004 and all inmates and staff were transferred to the Women’s Huron Valley Correctional Facility in Ypsilanti. Heise said the Michigan Land Bank’s RFP marks the next chapter in the DeHoCo story.

A mandatory property site inspection is planned for 10 a.m. Sept 14. Contact Jeff Huntington of the land bank by email at landbank@michigan.gov with the subject “DEHOCO INSPECTION” to register for the inspection. Bidders are required to attend the site inspection. Questions will not be accepted at the property inspection.

Questions from potential bidders must be received via email no later than 3 p.m. September 27, 2017. Questions must be submitted by email to: landbank@michigan.gov with the subject “DeHoCo RFP Questions”.

Bidders must submit the proposal package using the format provided in Section III of the RFP, by 2 p.m. October 25, 2017.

No other distribution of proposals is to be made by the bidder. All print and digital materials submitted become the property of the land bank and will not be returned to the bidder.

Historic image of Detroit House of Correction is circa 1884.