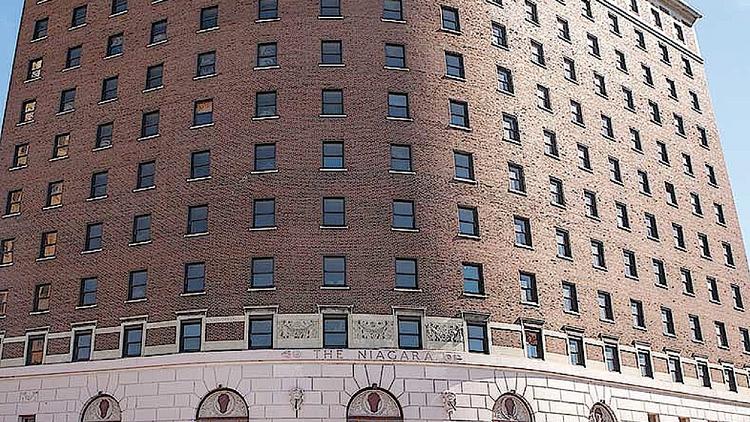 USA Niagara Development Corp. has issued RFPs (request for proposals) in the hopes of attracting a buyer for the historic Hotel Niagara, the 12-story landmark in Niagara Falls.

It was built in 1924, and closed its doors in 2007. It’s estimated that redevelopment may cost in excess of $20 million.

“Once the city’s premier destination hotel, we are confident that the historical integrity of the Hotel Niagara can be restored,” said Niagara Falls Mayor Paul Dyster.

The RFP is designed to focus on a mixed-use concept for the hotel bringing together a hospitality element along with, perhaps a restaurant or retail component along with an entertainment attraction.

The Hotel Niagara had an opulent past, with notables like Frank Sinatra, Joe DiMaggio, and Marilyn Monroe–who stayed at the hotel while filming “Niagara)”–as guests.

The Hotel Niagara (the “Property”) is located at 201 Rainbow Boulevard at First Street, on “Centennial Circle”, one block from Niagara Falls State Park, which enjoys roughly 9 million annual visitors and is in the midst of a $70 million upgrade of its park facilities. When it opened in 1924, the Hotel Niagara was among the City’s finest lodging and banquet establishments, and it is now listed on the National Register of Historic Places, making it eligible for both state/federal historic tax credits (which for a previously-proposed restoration at the Property were valued at a minimum of $5 million).

The Property was recently acquired by USA Niagara to facilitate its restoration and reuse. It is close to two City-owned public parking lots and also benefits from a number of nearby public investments in downtown Niagara Falls, including but not limited to the award-winning Conference Center Niagara Falls (immediately north of the property), the Niagara USA Official Visitor Center, the Niagara Falls Culinary Institute, and the Seneca Niagara Casino complex.