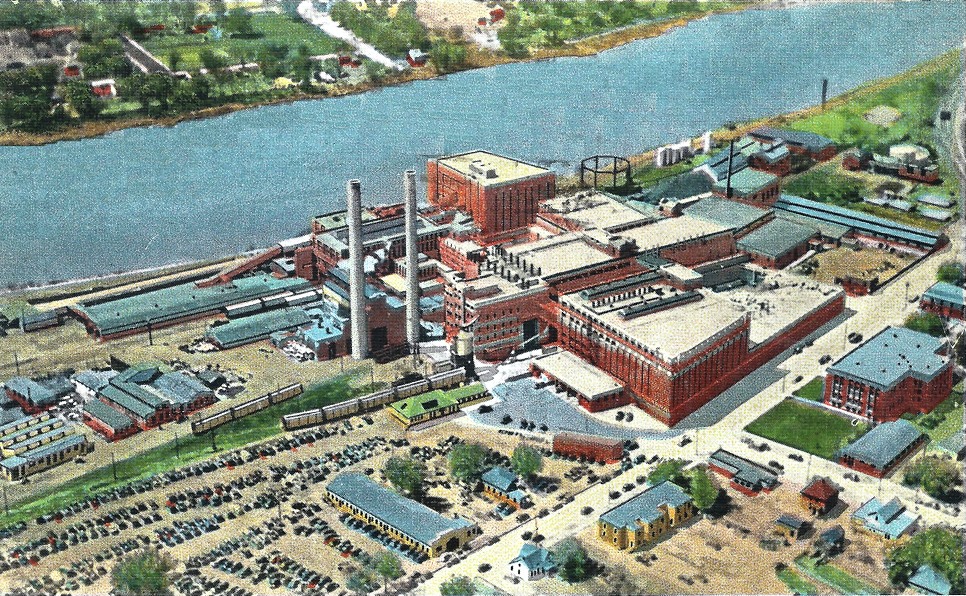 The Rath Packing Company was a meatpacking company located in Waterloo, Iowa between 1881 and 1985, on the Cedar River.

Initially, the company concentrated on hogs, but by 1908 the company was also slaughtering beef and soon lamb as well. Business thrived; lucrative contracts to supply meat to the Armed Forces during both World Wars helped the company grow. Growth and profitability were also spurred between the 1930s and 1950s by innovations such as the fancy dry curing of bacon and the vacuum canning of meats. By the company’s fiftieth anniversary in 1941, the small regional packing house in Waterloo had grown into the nation’s single largest meatpacking facility with branch facilities in 12 states. By the end of World War II, Rath was the fifth largest meatpacker in the U.S.

The years following World War II brought labor troubles. A 1948 strike at the Waterloo plant resulted in the death of a striking union member and a riot. Iowa National Guard troops were called in to restore order.

The 1960s and 1970s were difficult times for the meat packing industry. Competition was fierce and the industry had become high volume, low margin. Profitability was hurt by a decline in per capita pork consumption beginning in 1960. By the mid 1970s, Rath’s 50-year-old four-story plant was obsolete. .

Now, the city (which owns the property) has issued an RFP for the Administrative Building, seeking a redeveloper who can breath new life into their most historic structure.

“There’s still a lot of citizens that have a fond memory of Rath,” says City Planning and Zoning Director Noel Anderson. “We always have two options, one is to demolish it and have new development here, or to try and rehab.”

“Structurally the building is in pretty good shape, there is some obvious deficiencies in there. So there is some water leakage in there, but they all believe that the bones are pretty good about the building,” he explained. “So, it’s just a matter of getting in there and really rehabbing it and fixing it up.”

Undated image is from historic postcard.