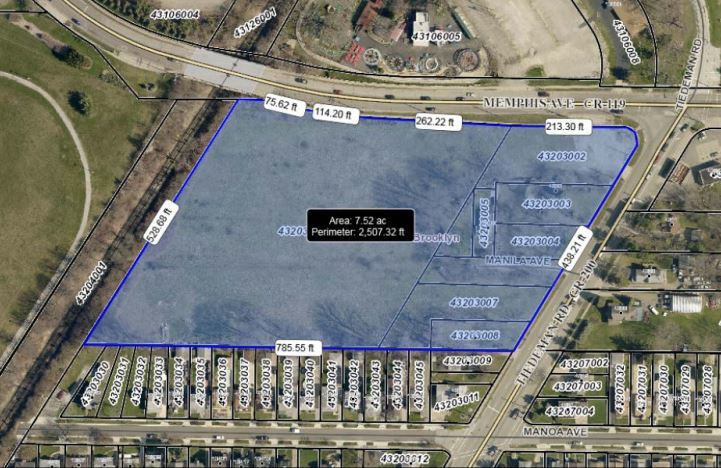 The City of Brooklyn, Ohio is soliciting proposals from interested parties to purchase and redevelop the City-owned former open-air Winter’s Market site (the “Site”) into a viable urban office/retail center.

Andi Udris, Brooklyn’s Director of Economic Development, says that the city acquired the property as a strategic move. They want to influence who redevelops it and how, so as to maximize the revitalizing effect it has on the neighborhood.

This 7.5 acre site is located on the northwestern side of the City of Brooklyn and is accessible via both Memphis Avenue and Tiedeman Road which are two of Brooklyn’s primary commercial corridors. Single-family residences line its southern and eastern borders with a gas station located on the northeast edge, a railroad right-of –way lies to the west, and the locally famous “Memphis Kiddie Park” and the Al Sirat Grotto Brookside Temple to the north.

The Cleveland Metroparks Big Creek Reservation lies just to the northeast of the Site. The property is generally two-thirds zoned General Business with the eastern one-third portion zoned Retail Business.

Interested parties will be initially screened by a qualification review. Development teams selected will be invited to supply a development proposal which will include a more in depth submission including preliminary design concepts, financing and leasing commitments. Owner occupants will be highly desired. The final selection decision will be recommended by the Economic Development Committee and approved by the Brooklyn City Council.

There is no deadline for submission requests until the property is actually sold. The selection process will be first-come, first-considered.