The city of Milwaukee, Wisconsin anticipates that their recent efforts to revitalize the Bronzeville neighborhood—which is just north of the downtown area—will attract a private redeveloper to a vacant site along Interstate 43.

The Redevelopment Authority of the City of Milwaukee has issued a Request for Proposals (RFP) for two city-owned properties totaling about 1 acre at 2225 N. Seventh St. and 2233-43 N. Seventh St. for $200,340. 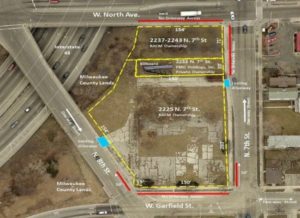 Map of parcels courtesy of City of Milwaukee.

It’s located within the Bronzeville Cultural and Entertainment District. The Project Site is included in an ongoing planning study, Moving Milwaukee Forward through Transit Oriented Development , as a catalytic site.

Preliminary ideas for the site envision a vibrant and dynamic mix of uses, including multifamily, entertainment, and retail. These proposed uses are consistent with similar recommendations found in the 2005 Bronzeville Redevelopment Plan and the 2009 Northeast Side Area Comprehensive Plan.

This site is the westerly bookend to the Bronzeville Arts and Cultural District and serves as a gateway from I43. Traffic counts along North Avenue are over 20,000 vehicles per day. Easy access to and high visibility from I-43 are an asset. Traffic counts on I-43, just north of the North Avenue interchange are approximately 148,000 per day.

A recent market analysis that was conducted for the King Drive and Bronzeville area revealed that within a 20 minute drive, there is $5.3 billion in overall spending potential with demand for neighborhood-serving retail and destination businesses. With over $296 million in regional spending on entertainment and recreation uses, the King Drive and Bronzeville neighborhood has an opportunity to become a future regional cultural and entertainment hub.

Acceptable uses of the property, according to the RFP, include: a boutique hotel, a conference center with banquet hall and/or catering component, a mixed-use development with first floor retail, a theater with an open plaza, or uses that contribute to or exemplify the existing Bronzeville Cultural and Entertainment District.