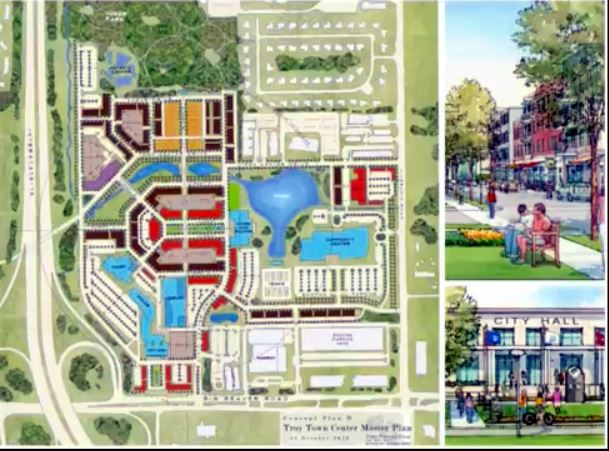 While the city of Troy, Michigan contemplates what might be developed on the Troy Civic Center, developers have already suggested that it would be a great place for a Dave & Buster’s, or we might tear down Troy City Hall and replace it with a shopping plaza on Big Beaver.

This is not what the City Council or the Troy Planning Commission envisions for what they now reference as Troy Town Center. Both entities see it as a mixed-use, walkable community with homes, parks, some retail and just a bit of office so your accountant, doctor or lawyer could have an office close by.

Councilmembers and planners got an update on March 6, 2017 on the proposed plans from Robert Gibbs, president of Gibbs Planning Group in Birmingham. He is a renowned urban designer who has been responsible for some of the most successful urban developments in the country.

Now the question they had to ask themselves: Where do we go from here?

All agreed that it’s time to ask the potential developers for a request for quotation (RFQ) to find out who might be interested in building the Troy Town Center.

See full article in the Gazette by Cynthia Kmett.