The City of Lakewood, Ohio (the “City”) is soliciting qualifications from interested parties to redevelop the City-owned former Lakewood Hospital site (the “Site”) into a vibrant and transformative mixed-use urban neighborhood.

The 5.7 acre Site is located in the very heart of Downtown Lakewood, is accessible via three well-traveled public streets, and fronts Detroit Avenue, Lakewood’s primary commercial corridor. Single-family residences line its southern border and commercial buildings, including the new Cleveland Clinic Family Health Center (currently under construction), lie to the east and west. 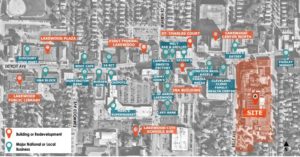 Redevelopment of the Site will demonstrate the highest quality design and architecture; it will include a balanced and thoughtful mix of uses, support sustainable development practices, create Lakewood’s finest multi-functional outdoor community gathering space, and be supported by the Community Vision.

The Site represents an outstanding opportunity for a mutually beneficial redevelopment partnership between the City and the selected development team to leverage Downtown Lakewood as a regionally known and thriving vibrant neighborhood.

Lakewood, Ohio is a first-ring streetcar suburb immediately west of Cleveland. Our 52,000 residents live within 5.6 square miles (a population density similar to Washington D.C.), making Lakewood the most densely populated city in Ohio. Incorporated in 1911, Lakewood began as a collection of fruit farms and orchards.

Following the housing boom of the early 1920’s, it became recognized as the City of Beautiful Homes. The first half of the 20th century also saw the dramatic growth of small businesses and the City’s nationally known Gold Coast neighborhood was developed in the 1950’s and 60’s. Lakewood is now well positioned for its second century as the community plans for a bright and visionary future. Lakewood has always placed a high value on its economic, social, and cultural diversity, creating a welcoming community for all lifestyles.