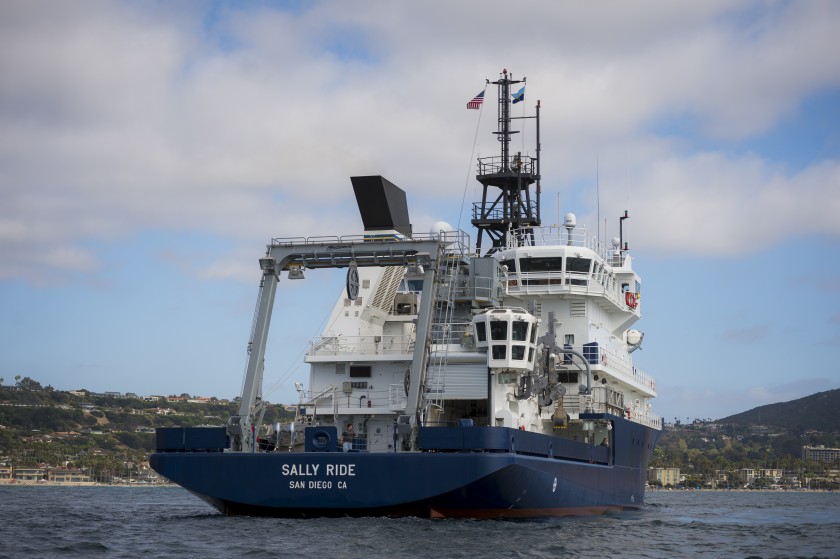 All around the globe, hundreds of thousands of deadly underwater “bombs” are set to explode. During the 20th century—when environmental regulations were weak or non-existent—chemical manufacturing companies and nuclear energy companies / agencies in Russia, the UK, the U.S. and elsewhere simply put their toxic and/or radioactive waste into 55-gallon steel drums and dumped them in the ocean.

In the U.S., the U.S. Navy and the Atomic Energy Commission (now called the Department of Energy) were the worst offenders in this regard, as originally documented in the 2002 book, The Restoration Economy.

They knew that the salt water would eventually corrode the metal and release the contents—contaminating literally every gallon of ocean water worldwide—but they quite literally didn’t care: that would probably not happen during their lifetime, and the cost savings (over treating the waste) would boost their bottom line immediately. But that “distant” future is here, and those containers are leaking.

An added problem is that most of this dumping was done in secret—with the tacit permission of easily-purchased politicians—so no records were kept of the dump sites. How to find them, so they can be removed and either treated or safely stored? Underwater Roombas. 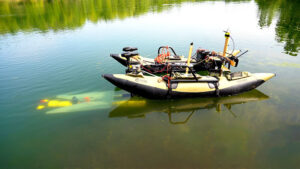 A yellow underwater robot (left) finds its way to a mobile docking station to recharge and upload data before continuing a task. (Purdue University photo/Jared Pike)

Robots can be amazing tools for contamination search missions and environmental studies, but eventually they must return to a base to recharge their batteries and upload their data. That can be a challenge if your robot is an autonomous underwater vehicle (AUV) exploring deep ocean waters.

Back in October of 2020, researchers at Purdue University announced that they had created a mobile docking system for AUVs, enabling them to perform longer tasks without the need for human intervention. The team also has published papers on ways to adapt this docking system for AUVs that will explore extraterrestrial lakes, such as those of Jupiter‘s and Saturn’s moons.

Also back in October of last year, California’s were informed in an LA Times article that they had DDT dumping sites off their coast.

A crew was assembled and the gears set in motion for a deep-sea expedition aboard the Sally Ride, one of the most technologically advanced research vessels in the country.

Recently, as described in a March 10, 2021 LA Times article, the ship left San Diego and head for the San Pedro Basin, where 31 scientists and crew members spent two weeks surveying almost 50,000 acres of the seafloor; a much-needed first step in solving this toxic tragedy that the ocean had buried for decades.

Once a marine robot submerges in water, it loses the ability to transmit and receive radio signals, including GPS data. Some may use acoustic communication, but this method can be difficult and unreliable, especially for long-range transmissions. Because of this, underwater robots currently have a limited range of operation.

“Typically these robots perform a pre-planned itinerary underwater,” Mahmoudian said. “Then they come to the surface and send out a signal to be retrieved. Humans have to go out, retrieve the robot, get the data, recharge the battery and then send it back out. That’s very expensive, and it limits the amount of time these robots can be performing their tasks.”

Mahmoudian’s solution is to create a mobile docking station that underwater robots could return to on their own. A video describing this research is available on YouTube.

“And what if we had multiple docks, which were also mobile and autonomous?” she said. “The robots and the docks could coordinate with each other, so that they could recharge and upload their data, and then go back out to continue exploring, without the need for human intervention. We’ve developed the algorithms to maximize these trajectories, so we get the optimum use of these robots.”

A paper on the mission planning system that Mahmoudian and her team developed has been published in IEEE Robotics and Automation Letters. The researchers validated the method by testing the system on a short mission in Lake Superior.

“What’s key is that the docking station is portable,” Mahmoudian said. “It can be deployed in a stationary location, but it can also be deployed on autonomous surface vehicles or even on other autonomous underwater vehicles. And it’s designed to be platform-agnostic, so it can be utilized with any AUV. The hardware and software work hand-in-hand.”

Mahmoudian points out that systems like this already exist in your living room. “An autonomous vacuum, like a Roomba, does its vacuum cleaning, and when it runs out of battery, it autonomously returns to its dock to get recharged,” she said, “That’s exactly what we are doing here, but the environment is much more challenging.”

If her system can successfully function in a challenging underwater environment, then Mahmoudian sees even greater horizons for this technology.

“This system can be used anywhere,” she said. “Robots on land, air or sea will be able to operate indefinitely. Search-and-rescue robots will be able to explore much wider areas. They will go into the Arctic and explore the effects of climate change. They will even go into space.”

A patent on this mobile underwater docking station design has been issued. The patent was filed through the Secretary of the U.S. Navy. This work is funded by the National Science Foundation (grant 19078610) and the Office of Naval Research (grant N00014-20-1-2085).