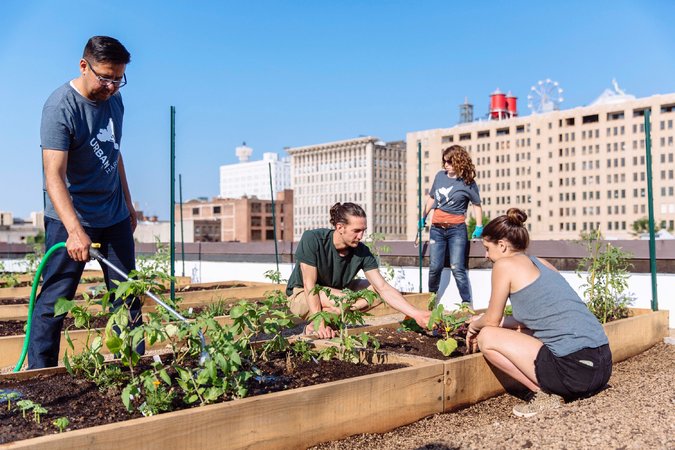 A two-story concrete building on the edge of downtown St. Louis, Missouri is bearing its heaviest load 88 years after construction.

Mary Ostafi, an architect who founded the nonprofit Urban Harvest STL in 2011, has led an effort to dump some 40 tons of dirt on the building’s 9,000-square-foot roof and grow organic vegetables in a venture called the Food Roof Farm.

Mrs. Ostafi sees the project fostering a lumbering urban revitalization in St. Louis, which has seen its core downtown population increase 133 percent, to 8,300 residents, over the last 10 years during a conversion of old commercial buildings into loft apartments, according to a Downtown STL report released in May.

Urban Harvest STL’s project cost $356,000, and it received a $135,000 grant from the Metropolitan St. Louis Sewer District to reduce overflows from the combined storm and waste sewerage system. About $155,000 in donated materials and time by lawyers, accountants and other professionals also figured into the total expense, Mrs. Ostafi said.

More important, she said, the Food Roof Farm could help bury the “Delmar Divide,” an invisible barrier along Delmar Boulevard that splits the city socioeconomically and racially.

“For community development and redevelopment, I see food roofs as the fastest-growing green roof sector, at least east of the Rocky Mountains,” said Mr. Mayer, who began working with Urban Harvest STL two years ago. “It’s the rage.”

The project includes a greenhouse and beehives, and eventually, it will add a chicken coop. The greenhouse will grow seedlings for the farm and microgreens to sell to nearby restaurants.

Urban Harvest STL expects to derive most of its revenue from nearby residents who will pay an upfront fee to pick up produce throughout the growing season, and it is renting garden beds to as many as 20 residents for a suggested donation. Those programs are also geared toward fulfilling Mrs. Ostafi’s goal of generating community involvement at the garden.