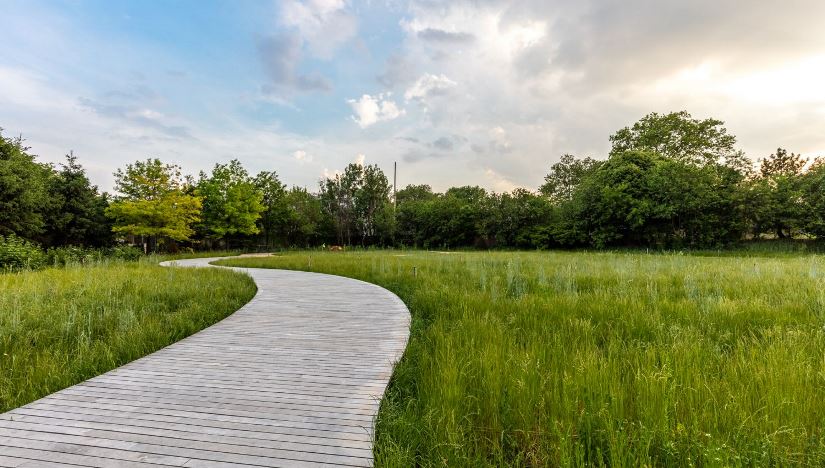 On the west side of Manhattan, an armada of cranes and construction workers is building the city’s largest 21st-century development. A 28-acre, $25 billion megaproject by Related Companies, Hudson Yards will include six skyscrapers, 17 million square feet of commercial and residential space, a performing arts center, and a hotel.

The project’s scale is impressive, as is its location spanning one of the busiest railways in New York City—an industrial site filled with train cars and a tangle of tracks and tunnels. But when it’s completed in 2025, people won’t see any of that heavy infrastructure. They’ll stroll through 14 acres of open space planted with native flowers and grasses, beneath groves of trees, and along pathways that will link the new neighborhood to the surrounding parks and streets.

“It’s like cultivating an oasis over a desert,” says Thomas Woltz, principal of Nelson Byrd Woltz Landscape Architecture (NBW), the firm enlisted to design Hudson Yards’ landscape. Woltz’s philosophy is that green space should be the connective tissue of cities; a marriage of local ecology and culture.

As cities grow increasingly complex, with real estate at a premium and sustainability and resiliency top priorities, Woltz sees the role of parks evolving. They are now essential to the urban fabric. “As a society, we do a pretty good job of creating urban parks as destinations, but it’s important to see those destinations as connected to our daily lives via the streetscape, public transportation, the systems of storm-water management,” Woltz says. “It’s about seeing [everything] as one giant complex system.”

NBW’s approach to urban design has distinctly rural roots. The firm first made its name in ecological restoration, working to return, for example, commercial farmland to its natural state. Woltz, who joined in 1997, spent the first 15 years of his career immersed in these sorts of projects before applying his regenerative method to cities.

Founded in 1985, Nelson Byrd Woltz (NBW) is a 40-person landscape architecture firm with offices in Charlottesville, Virginia and in New York City, New York. Committed to education and conservation, the firm has been involved in a broad array of public and private projects including botanic gardens and zoos, public parks, private gardens and estates, academic institutions, corporate campuses, and town planning.

The firm actively seeks this diversity of project scales and types to cultivate the creativity of the professional staff. The varied backgrounds of the staff include studies in the fields of landscape architecture, architecture, anthropology, biology, economics, ecology, zoology, horticulture, art, art history, and architectural history. This broad knowledge base supports the firm’s collective creativity and ability to respond to diverse client needs.

The firm’s work has garnered over 80 national and regional awards and has been widely published. Current projects include Hudson Yards in Manhattan (NY), Memorial Park in Houston (TX), Centennial Park in Nashville (TN), Coastal Maine Botanical Gardens, Cornwall Park in Auckland (New Zealand), Devonian Botanic Garden in Edmonton (Canada), and Brooklyn Navy Yard Naval Hospital Cemetery Memorial Landscape (NY). The work of the firm has been featured in numerous national and international publications and is the subject of a recently released monograph published by Princeton Architectural Press.

Intelligent water management is central to to any good landscape design. At Houston’s Memorial Park, Woltz channeled stormwater from a nearby freeway into the park. This helped stop the highway from flooding, while simultaneously reducing the need to use drinking water to irrigate the park. At Nashville’s Centennial Park, Woltz dug through old records to discover a natural spring that city engineers had buried in he 19th century. It was daylighted to naturally irrigate the park.

The Nelson Byrd Woltz philosophy centers on design that honors and reveals the local history and natural context of a site through a process of observation, creative interpretation, and construction. Initial design concepts are driven by attentive observation of site dynamics including prevailing winds, solar orientation, hydrology, geology, soils, and existing plant and animal communities.

In the development of a design, the firm employs a vocabulary of primarily indigenous materials, including plants, paving, landforms, and multiple uses of water. We meld the particular – a place, a plant community, a certain landform – with universal archetypal forms such as the mount, the theater, the grove, the parterre – so that the local ethos of a place is never lost or homogenized.

The diverse backgrounds of the staff include studies in the fields of landscape architecture, anthropology, biology, economics, zoology, horticulture, architecture, art, art history, and architectural history. This broad knowledge base contributes greatly to the firm’s collective creativity and ability to respond to diverse client needs and expectations.