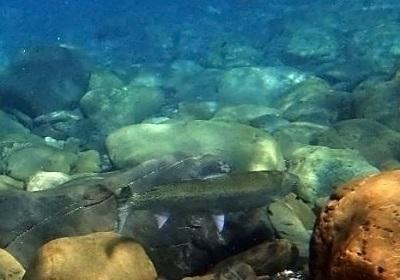 “We are thrilled to see this latest confirmation of the success and value of dam removal,” said Acting Superintendent Rachel Spector. “As restoration proceeds, the benefits continue to mount along the entire river and throughout its entire ecosystem.”

An early August 2016 snorkel survey between Rica and Glines canyons revealed five adult Chinook salmon, one steelhead and 10 adult sockeye salmon. Biologists were even able to watch as two sockeye pairs dug their nests or “redds” near the Boulder Creek confluence within the former Lake Mills.

Another snorkel survey between the Hayes River confluence and the Elkhorn Ranger Station along the Elwha River found Chinook, summer steelhead, and bull trout, all located upstream of Glines Canyon.

For millennia, the Elwha River ran wild, connecting mountains and seas in a thriving ecosystem. The river proved to be an ideal habitat for anadromous (sea-run) fish, with eleven varieties of salmon and trout spawning in its waters. For millennia these fish thrived in the river and provided food for the Lower Elwha Klallam tribe who resided along its banks.

In the late 1800s a growing nation looked to the Northwest to supply the lumber needed to build new cities.This brought rapid change to the Olympic Peninsula and especially to the Elwha River and the people of the Lower Elwha Klallam tribe. In the early 1900s, two dams, Elwha and Glines Canyon, were built on the river. The dams fueled regional growth, but blocked the migration of salmon upstream, disrupted the flow of sediment and wood downstream, and flooded the historic homelands and cultural sites of the Lower Elwha Klallam Tribe.

For over a century, the web of ecological and cultural connections in the Elwha Valley were broken – then the river’s story changed course. In 1992, Congress passed the Elwha River Ecosystem and Fisheries Restoration Act, authorizing dam removal to restore the altered ecosystem. After two decades of planning, the largest dam removal in U.S. history began on September 17, 2011. Six months later Elwha Dam was gone, followed by the Glines Canyon Dam in 2014.

Today, the Elwha River once again flows freely from its headwaters in the Olympic Mountains to the Strait of Juan de Fuca.