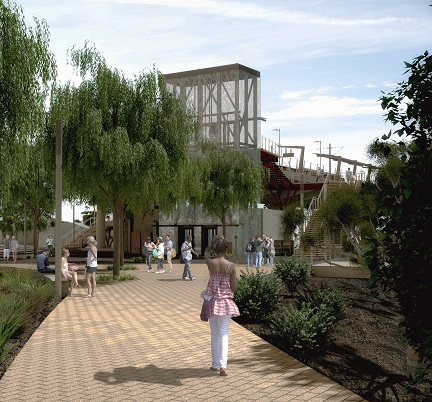 On September 14, 2016, the U.S. Department of Transportation’s Federal Transit Administration (FTA) announced a $1.04 billion federal grant agreement with the San Diego Association of Governments (SANDAG) to extend existing Blue Line Trolley service from downtown San Diego, California to the growing University City area. The extension will improve access to employment hubs and numerous educational and medical facilities north of downtown, making it easier for people to travel throughout the city. 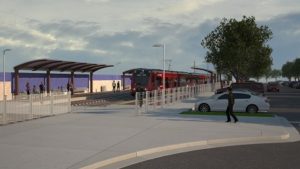 FTA Acting Administrator Carolyn Flowers made the announcement to commit the funds during a ceremony with representatives from SANDAG and the San Diego Metropolitan Transit System (MTS), which will operate the service once it is built.

“The Obama Administration is committed to investing in transportation projects that improve mobility and provide ladders of opportunity for residents,” said U.S. Transportation Secretary Anthony Foxx. “San Diego’s Trolley extension will do just that by helping thousands of transit riders to access employment, education, healthcare and other important services.”

The 10.92-mile light rail extension, referred to locally as the Mid-Coast Trolley, will serve major activity centers such as Old Town, Mission Bay Park, the Department of Veteran’s Affairs Medical Center, UC San Diego, and the Westfield UTC shopping center. Officials estimate the project will serve 24,600 transit trips every weekday, with service anticipated to start in 2021.

“FTA is proud to partner with San Diego to bring new transit options to this growing region,” said FTA Acting Administrator Carolyn Flowers. “With the population along the Mid-Coast corridor expected to grow nearly 20 percent in the coming decades, this trolley extension will offer a much-needed alternative to traffic congestion in the years ahead.” 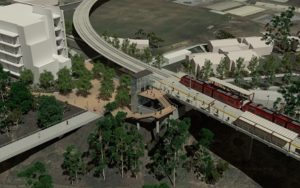 With the signing of the federal grant agreement, FTA is committing a total of $1.04 billion through its Capital Investment Grant (CIG) Program to the $2.17 billion Mid-Coast Corridor Transit Project. In addition to the $100 million that will be awarded with the signing of the grant agreement today, the remaining federal funds will be provided over the course of 10 years on an annual payment schedule, subject to Congressional approval during the annual appropriations process.

The CIG Program is the nation’s primary grant program for funding major transit capital investments. Projects accepted into the highly competitive program must go through a multi-year, multi-step process according to requirements in law in order to be eligible for and receive program funds.

The Mid-Coast Trolley will extend light rail service from the Santa Fe Depot in Downtown San Diego to the University City community, serving major activity centers such as Old Town, UC SanDiego, and Westfield UTC. Primary construction of the project is expected to begin in fall 2016, with service anticipated to begin in 2021. View a “flyover” of the Mid-Coast Trolley route. 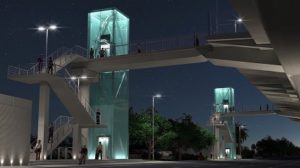 Freeways and arterials in the Mid-Coast Corridor are generally congested and traffic congestion is projected to increase as the region grows. Population in the entire corridor is forecasted to increase 19 percent and employment is forecasted to increase 12 percent by the year 2030. The Mid-Coast Trolley extension will expand transportation capacity in the corridor to accommodate existing and future travel demand, particularly for peak period commute trips. The project will provide an effective alternative to congested freeways and roadways for travelers and will reduce vehicle miles traveled.

The Trolley extension route begins just north of the Old Town Transit Center and travels in existing railroad right-of-way and alongside I-5 to Gilman Drive. It crosses to the west side of I-5 just south of Nobel Drive and continues on to serve the heart of the UCSD campus. It then crosses back to the east side of I-5 near Voigt Drive to serve the UCSD east campus and Scripps Memorial Hospital, transitions into the median of Genesee Avenue, and continues down Genesee Avenue to the Westfield UTC Transit Center. View simulations of each station.

The project will connect corridor residents with other Trolley lines serving Mission Valley, East County, and South County. As an extension of the existing Metropolitan Transit System Trolley Blue Line, it will offer a one-seat (no transfer) ride from the international border and communities south of Downtown San Diego all the way to University City. This new service will enhance direct public access to other regional activity centers and improve travel options to employment, education, medical, and retail centers for corridor residents, commuters, and visitors.