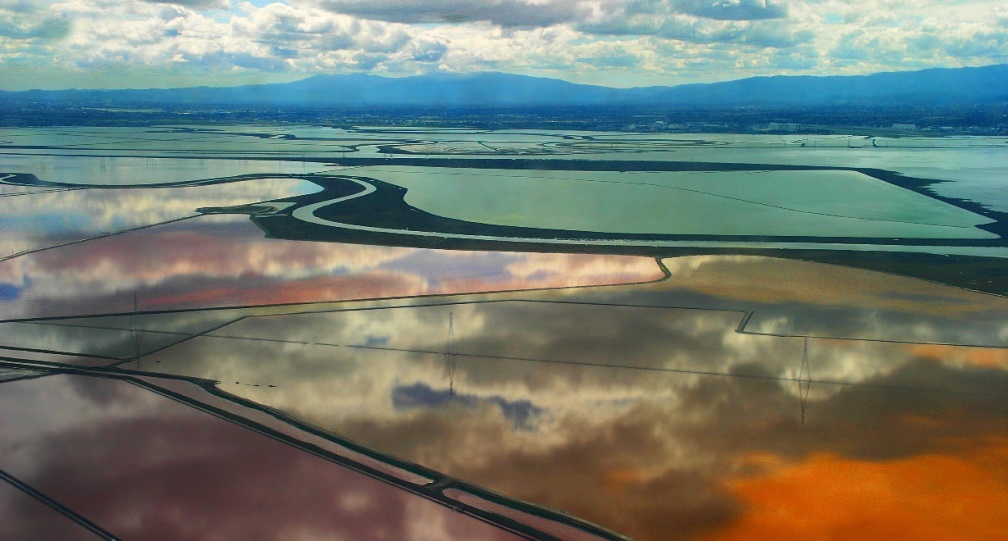 It’s hard to imagine it now, given the stranglehold of Silicon Valley’s tech industry on the region, but 100 years ago the predominant south Bay Area business was salt. When Spanish missionaries sailed into the San Francisco Bay in 1776, they saw Ohlone tribe members scraping natural salt off of rocks and dipping willow branches into briny pools to collect the precious mineral.

As gold fever swept across northern California in the 1850s, immigrant settlers had already begun to carve the species-rich wetlands into large commercial salt evaporation ponds. By the 1930s, the Leslie Salt Company had consolidated over a dozen small producers into the world’s largest industrial salt production company, and half of the South Bay’s extensive marshes, whose ducks and salmon once far outnumbered humans, were gone.

Now, the south San Francisco bay shoreline’s next mammoth transformation is well underway: a 50-year project to return the salt ponds back to the bay, restoring them once again into tidal marsh for the first time in 150 years. At about half the size of San Francisco, the 15,000-plus-acre wetland restoration effort is the largest on the West Coast. The project will remake the South Bay’s shoreline and hopefully buffer the low-lying, densely populated area against rising sea levels.

In 2003, amid growing public recognition of the importance of wetlands—and increased environmental restrictions encumbering redevelopment of the land—Cargill (which acquired Leslie Salt in 1978) gave the state and federal government the majority of their mineral rights and salt pond acreage in exchange for $100 million. This deal opened the door for wetland restoration on a scale never before seen in California.

Because of its sheer size and wide-ranging funding sources, the project was split into two pieces: the restoration of three complexes of nearly 50 former salt ponds sprinkled around the east, west, and southern foot of the San Francisco Bay, and a separate effort focused on a cluster of eight ponds fronting the city of San Jose.

The challenges of such a massive project are many and daunting, including land acquisition, funding, and navigating a gauntlet of recondite multiagency permitting requirements, not to mention the difficulty in parsing the complex science to adaptively plan for sea level rise. But one of the biggest concerns right now? Dirt.

“I need 2 million cubic yards of dirt,” declares Lieutenant Colonel Dave Kaulfers. The US Army Corps of Engineers project manager, sporting close-cropped gray hair, fatigues, and a slow Virginia drawl, oversees the second piece of the project—the heart of which is the construction of a 3.8-mile flood-protection levee along the city of San Jose’s shoreline.

Kaulfers estimates that at 1000 cubic yards of dirt per day, or about 85 full dump trucks, it will take six years just to deliver all of it, though he hopes to speed up that timeline. Half of the dirt will go to rebuild Cargill’s century-old salt pond rims (called “berms”) into an engineered levee that will be over 100 feet wide at its base and five to 10 feet high.

The new levee is designed to protect, among other things, the largest advanced wastewater treatment plant in the western United States, San Jose tech offices, and Alviso, a predominantly Hispanic community nestled in the crook of where Guadalupe River and Coyote Creek meet the bay. The shoreline neighborhood of several thousand people has suffered devastating floods over the past 100 years and sits so low that even minor rainfall chokes its depressed streets with water. But the point of the levee is not just flood mitigation.

“We are not in the flood-protection business; we are in the wetland restoration business,” says Brenda Buxton, deputy regional manager for the California Coastal Conservancy, who is partnering with Kaulfers to restore the ponds flanking the army corps’ new levee. Part of the restoration consists of breaking the existing berms to allow the bay back into the former salt ponds, where the rise and fall of brackish water will help naturally deposit sediment and establish marsh plants.

But allowing the tides in means the adjacent development, which previously relied on the salt ponds as a barrier between it and the bay, must be protected from potential flooding. “You can’t take the risk of breaking levees and bringing back tidal water and not have anything to protect the communities,” Buxton points out. “So that’s when we got involved with the Army Corps of Engineers.”

The other million cubic yards of dirt will go toward creating an “ecotone,” or gently sloped terrace stepping up the levee’s bayside in order to provide high ground for wetland wildlife and habitat to migrate to over time, as sea levels rise. Together, the levee and ecotone will provide both flood protection and habitat, a combination that created an uncommon alliance between the army corps and environmentalists, who often find themselves on opposing sides of the corps’ development and dredging projects.

Kaulfers, who transferred to the project in January 2017, confesses to a steep learning curve—in particular, understanding the intricacies of California’s multiple environmental permitting agencies. “I’m a civil engineer,” he says. “I could go build deep foundations and embankments, but all this [environmental permitting]? I had no idea what they were talking about.” Kaulfers estimates that since he began, the project team has met with the permitting agencies at least 15 times, and he compares the process of hammering out the overlapping and sometimes conflicting multi-agency requirements to “blunt force trauma.”

The end result of the give-and-take, arm wrestling, and trauma will be nearly four miles of levee that will protect over 1,100 structures and 5,500 people against a 100-year flood and 2.59 feet of sea level rise. It’s currently projected to last at least until 2067. 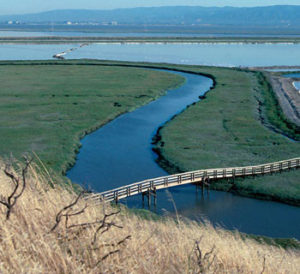 But the return on this investment is already starting to pay off. In the 13 years since the first salt pond was reconnected back to the San Francisco Bay in 2006, the restoration has marched along: Over 3,000 acres of tidal marsh have been restored and seven miles of new public access and recreational trails installed. This year dump trucks will begin rattling through Alviso’s rain-pooled streets, hauling dirt for the levee, which will provide high and dry refuge for marsh habitat and wildlife on one side and shelter Alviso from tides and sea level rise on the other.

As the south San Francisco Bay’s shoreline transformation slowly takes hold, it’s easy to imagine a future where empty, white-specked ponds are supplanted by blue and green salt marsh, and abandoned salt infrastructure is replaced by viewing platforms from which visitors watch nesting snowy plovers and listen for the twilight call of Ridgway’s rails.

“Twenty to 50 years from now, instead of just water, I think you’ll start to see lots of vegetation,” Buxton predicts. “What I really hope is you get lost in a wilderness of marsh and water, and you can’t see landmarks anymore from the shore, just thousands upon thousands of ducks and shorebirds wheeling overhead. And you get back some of that past description of the San Francisco Bay as a Garden of Eden bursting with wildlife.”

This article by Isaac Pearlman (a climate writer and environmental scientist in the Bay Area) originally appeared on the Sierra Club website. Reprinted here with permission.