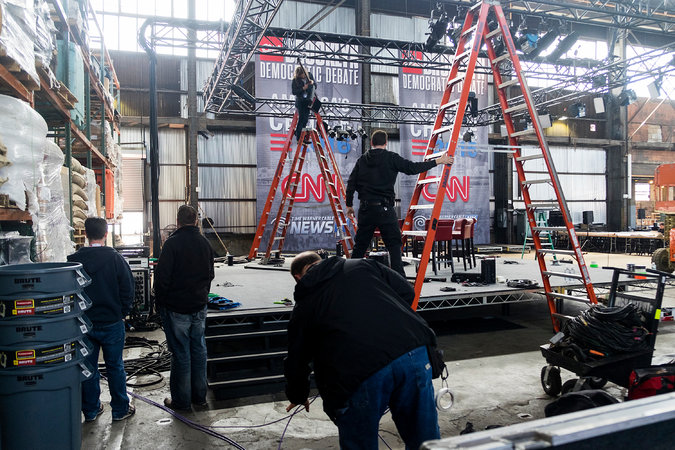 When Bernie Sanders and Hillary Clinton took the stage in Brooklyn, New York on April 14, 2016 for their ninth Democratic presidential primary debate, they will stand amid a shining example of how the American economy has been reshaped in their lifetimes.

The site, the Duggal Greenhouse, once thrummed with workers assembling components for the most sophisticated warships in the world.

Now, it is a clean, well-lighted space rented out to investment banks and pop stars. Beyoncé and Madonna have rehearsed there.

From a distance, that evolution may seem like another attempt to put lipstick on a fading industrial legacy.

But upon closer inspection, the Greenhouse is part of a concerted effort by New York City officials and a collection of entrepreneurs to revive a historic hub of American enterprise: the Brooklyn Navy Yard.

The Brooklyn Navy Yard was built in 1801 and now, more than 200 years later, it’s having quite the renaissance.

President John Adams authorized the creation of the Brooklyn Navy Yard, and four other shipyards throughout the young U.S., at the very end of his presidency. The shipyards employed as many as 70,000 people during World War 2 and were shuttered a couple of decades later by Secretary of Defense Robert McNamara.

In the ’70s, the Navy Yard reopened, but struggled. Two times, large maritime companies came in, brought jobs, and then closed down.

In the 1980s, New York City Mayor Ed Koch tried again to revitalize the space with the Brooklyn Navy Yard Development Corporation. The Yard was broken down into smaller spaces and a more diverse group of tenants were brought in. By the late 1990s, 200 smaller and mid-sized businesses had moved in, bringing 3,000 jobs and lifting the occupancy rate to 98 percent.

Growth continued and in the first decade of the new millennium, the Yard became home to 275 businesses with 6,000 employees.

As the once iconic hub for manufacturing gets a second wind, two unlikely entrepreneurs are overhauling one of the old warehouses that sits along New York City’s East River.

What they hope is that the resulting collaborative workspace, called New Lab, will become an axis for the Brooklyn Navy Yard to orbit around as it continues to develop, grow and attract entrepreneurship.