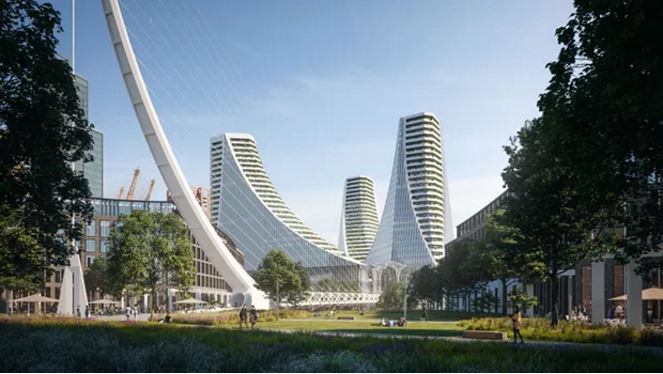 Greenwich Peninsula is an area of south-east London, England, located in the Royal Borough of Greenwich.

View of Greenwich Peninsula in 2000. Photo by James Gibbon via Wikipedia.

The peninsula is bounded on three sides by a loop of the River Thames, between the Isle of Dogs to the west and Silvertown to the east.

Private developer Knight Dragon got the green light from the city in September of 2015 to launch one of the largest regeneration projects in Europe on Greenwich Peninsula: almost 200 acres. The masterplan for Greenwich Peninsula was designed by renowned London-based architects Allies & Morrison.

Now, in February of 2017, Spanish architect Santiago Calatrava has unveiled his £1 billion portion of the £8 billion redevelopment effort to transform Greenwich Peninsula, the site of the Millennium Dome. Calatrava’s towers will be 30 stories tall, and the will be linked to the nearby River Thames by a tubular bridge. 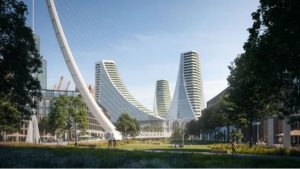 Three tapering towers will stand atop a tube and bus station, theatre, cinema, bars, shops and a performance venue. The illuminated terraced blocks will house offices, apartments and hotels with views of the River Thames, as well as winter gardens below. When complete, it will feature a new tube station, performance venue and winter gardens topped by a crown-like arrangement of towers.

The 130,064 sq m scheme backed by developer by Knight Dragon is Calatrava’s first major UK project. Just one tube stop from Canary Wharf, Greenwich Peninsula will soon be a thriving district outlined by 1.6 miles of waterfront. 15,720 homes will combine with 48 acres of open green spaces, and a commercial district encompassing 3.5 million square feet of shops, hotels, schools and public facilities. 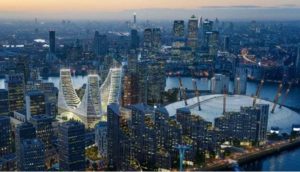 The regeneration of the area is already well under way, with the O2, the dramatic form of Ravensbourne College, and the Emirates Air Line cable car. Work is underway on 500 homes, with a further 1,100 with secured outline planning.

Richard Blakeway, Deputy Mayor for Housing, Greater London Authority, said: “This transformation of what was a disused site will not only provide thousands of much-needed new homes for Londoners, but also bring jobs as part of the wider regeneration of this key opportunity area.” 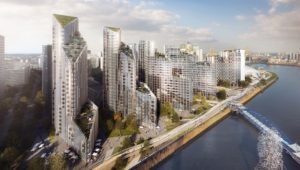 The 1.6 miles of the River Thames surrounding the Peninsula is set to experience a major revitalization. A 5km running track will sweep along the riverfront and weave through the neighborhoods on the Peninsula.

A floating performance space, The Jetty, has already opened and the MBNA Thames Clipper is increasing its East London route. As the Peninsula develops, a possible direct Clipper service from Greenwich Peninsula to Canary Wharf is also being considered.

All images courtesy of Knight Dragon unless otherwise noted.