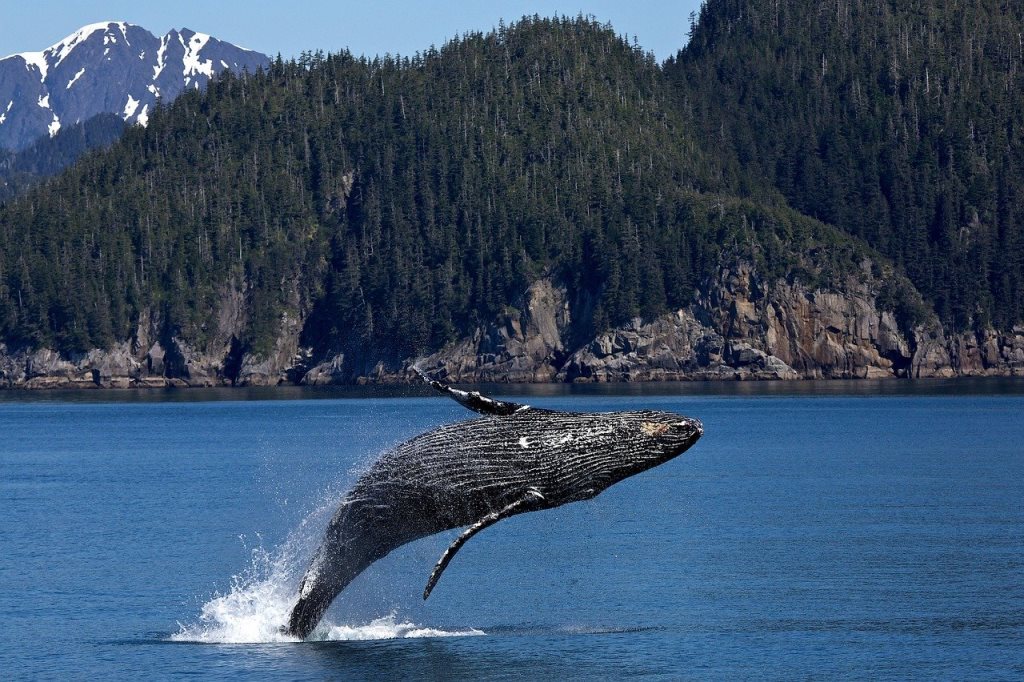 When it comes to saving the planet, one whale is worth thousands of trees.

Scientific research now indicates more clearly than ever that our carbon footprint—the release of carbon dioxide (CO2) into the atmosphere where it contributes to global warming through the so-called greenhouse effect—now threatens our ecosystems and our way of life. But efforts to mitigate climate change face two significant challenges. The first is to find effective ways to reduce the amount of CO2 in the atmosphere or its impact on average global temperature. The second is to raise sufficient funds to put these technologies into practice.

Many proposed solutions to global warming, such as capturing carbon directly from the air and burying it deep in the earth, are complex, untested, and expensive. What if there were a low-tech solution to this problem that not only is effective and economical, but also has a successful funding model?

An example of such an opportunity comes from a surprisingly simple and essentially “no-tech” strategy to capture more carbon from the atmosphere: increase global whale populations. Marine biologists have recently discovered that whales—especially the great whales—play a significant role in capturing carbon from the atmosphere (Roman and others 2014). And international organizations have implemented programs such as Reducing Emissions from Degradation and Deforestation (REDD) that fund the preservation of carbon-capturing ecosystems.

Adapting these initiatives to support international efforts to restore whale populations could lead to a breakthrough in the fight against climate change.

The carbon capture potential of whales is truly startling. Whales accumulate carbon in their bodies during their long lives. When they die, they sink to the bottom of the ocean; each great whale sequesters 33 tons of CO2 on average, taking that carbon out of the atmosphere for centuries. A tree, meanwhile, absorbs only up to 48 pounds of CO2 a year.

Protecting whales could add significantly to carbon capture because the current population of the largest great whales is only a small fraction of what it once was. Sadly, after decades of industrialized whaling, biologists estimate that overall whale populations are now to less than one fourth what they once were. Some species, like the blue whales, have been reduced to only 3 percent of their previous abundance. Thus, the benefits from whales’ ecosystem services to us and to our survival are much less than they could be.

But this is only the beginning of the story. 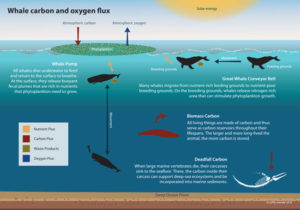 Wherever whales, the largest living things on earth, are found, so are populations of some of the smallest, phytoplankton. These microscopic creatures not only contribute at least 50 percent of all oxygen to our atmosphere, they do so by capturing about 37 billion metric tons of CO2, an estimated 40 percent of all CO2 produced. To put things in perspective, we calculate that this is equivalent to the amount of CO2 captured by 1.70 trillion trees—four Amazon forests’ worth—or 70 times the amount absorbed by all the trees in the US Redwood National and State Parks each year. More phytoplankton means more carbon capture.

In recent years, scientists have discovered that whales have a multiplier effect of increasing phytoplankton production wherever they go. How? It turns out that whales’ waste products contain exactly the substances—notably iron and nitrogen—phytoplankton need to grow. Whales bring minerals up to the ocean surface through their vertical movement, called the “whale pump,” and through their migration across oceans, called the “whale conveyor belt (see Chart 1).” Preliminary modeling and estimates indicate that this fertilizing activity adds significantly to phytoplankton growth in the areas whales frequent.

Despite the fact that nutrients are carried into the ocean through dust storms, river sediments, and upwelling from wind and waves, nitrogen and phosphorus remain scarce and limit the amount of phytoplankton that can bloom in warmer parts of the oceans. In colder regions, such as in the Southern Ocean, the limiting mineral tends to be iron. If more of these missing minerals became available in parts of the ocean where they are scarce, more phytoplankton could grow, potentially absorbing much more carbon than otherwise possible.

This is where the whales come in. If whales were allowed to return to their pre-whaling number of 4 to 5 million—from slightly more than 1.3 million today—it could add significantly to the amount of phytoplankton in the oceans and to the carbon they capture each year. At a minimum, even a 1 percent increase in phytoplankton productivity thanks to whale activity would capture hundreds of millions of tons of additional CO2 a year, equivalent to the sudden appearance of 2 billion mature trees. Imagine the impact over the average lifespan of a whale, more than 60 years.

Despite the drastic reduction in commercial whaling, whales still face significant life-threatening hazards, including ship strikes, entanglement in fishing nets, waterborne plastic waste, and noise pollution. While some species of whales are recovering—slowly—many are not.

Enhancing protection of whales from human-made dangers would deliver benefits to ourselves, the planet, and of course, the whales themselves. This “earth-tech” approach to carbon sequestration also avoids the risk of unanticipated harm from suggested untested high-tech fixes. Nature has had millions of years to perfect her whale-based carbon sink technology. All we need to do is let the whales live.

Now we turn to the economic side of the solution. Protecting whales has a cost. Mitigating the many threats to whales involves compensating those causing the threats, a group that includes countries, businesses, and individuals. Ensuring that this approach is practical involves determining whales’ monetary value. 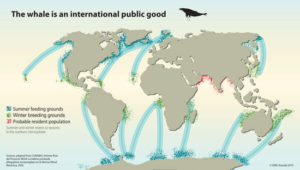 Whales produce climate benefits that are dispersed all over the globe. And because people’s benefits from the existence of whales do not diminish the benefits that others receive from them, they are a textbook public good (see Chart 2). This means that whales are affected by the classic “tragedy of the commons” that afflicts public goods: no individual who benefits from them is sufficiently motivated to pay their fair share to support them. Just think of the importance of earth’s atmosphere to our survival. Even though all nations acknowledge that everyone has an interest in preserving this common resource for the future, global coordination remains a problem.

To solve this international public goods problem, we must first ask, What is the monetary value of a whale? Proper valuation is warranted if we are to galvanize businesses and other stakeholders to save the whales by showing that the benefits of protecting them far exceed the cost. We estimate the value of an average great whale by determining today’s value of the carbon sequestered by a whale over its lifetime, using scientific estimates of the amount whales contribute to carbon sequestration, the market price of carbon dioxide, and the financial technique of discounting. To this, we also add today’s value of the whale’s other economic contributions, such as fishery enhancement and ecotourism, over its lifetime. Our conservative estimates put the value of the average great whale, based on its various activities, at more than $2 million, and easily over $1 trillion for the current stock of great whales.

But there is still the question of how to reduce the myriad dangers to whales, such as ship strikes and other hazards. Luckily, economists know how these types of problems can be solved. In fact, a potential model for such solutions is the United Nations (UN) REDD program. Recognizing that deforestation accounts for 17 percent of carbon emissions, REDD provides incentives for countries to preserve their forests as a means of keeping CO2 out of the atmosphere. In a similar way, we can create financial mechanisms to promote the restoration of the world’s whale populations. Incentives in the form of subsidies or other compensation could help those who incur significant costs as a result of whale protection. For example, shipping companies could be compensated for the cost of altered shipping routes to reduce the risk of collisions.

This solution, however, raises questions that are tricky to answer. To begin with, a financial facility for protecting whales and other natural assets must be set up and funded. Exactly how much should we be willing to spend on protecting the whales? We estimate that, if whales were allowed to return to their pre-whaling numbers—capturing 1.7 billion tons of CO2 annually—it would be worth about $13 per person a year to subsidize these whales’ CO2 sequestration efforts. If we agree to pay this cost, how should it be allocated across countries, individuals, and businesses? How much should each individual, company, and country that must bear some of the cost of protecting whales be compensated? And who will oversee the compensation, and monitor compliance with the new rules?

International financial institutions, in partnership with other UN and multilateral organizations, are ideally suited to advise, monitor, and coordinate the actions of countries in protecting whales. Whales are commonly found in the waters around low-income and fragile states, countries that may be unable to deal with the needed mitigation measures. Support for these countries could come, for example, from the Global Environment Facility, which typically provides support to such countries to meet international environmental agreements. The IMF is also well placed to help governments integrate the macroeconomic benefit that whales provide in mitigating climate change, as well as the cost of measures to protect the whales, into their macro-fiscal frameworks. The World Bank has the expertise to design and implement specific programs to compensate private sector actors for their efforts to protect whales. Other UN and multilateral organizations can oversee compliance and collect data to measure the progress of these efforts. 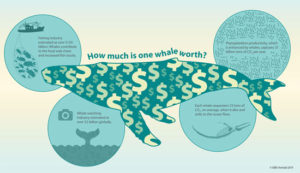 Coordinating the economics of whale protection must rise to the top of the global community’s climate agenda. Since the role of whales is irreplaceable in mitigating and building resilience to climate change, their survival should be integrated into the objectives of the 190 countries that in 2015 signed the Paris Agreement for combating climate risk.

International institutions and governments, however, must also exert their influence to bring about a new mindset—an approach that recognizes and implements a holistic approach toward our own survival, which involves living within the bounds of the natural world. Whales are not a human solution—these great creatures having inherent value of their own and the right to live—but this new mindset recognizes and values their integral place in a sustainable ocean and planet. Healthy whale populations imply healthy marine life including fish, seabirds, and an overall vibrant system that recycles nutrients between oceans and land, improving life in both places. The “earth-tech” strategy of supporting whales’ return to their previous abundance in the oceans would significantly benefit not only life in the oceans but also life on land, including our own.

With the consequences of climate change here and now, there is no time to lose in identifying and implementing new methods to prevent or reverse harm to the global ecosystem. This is especially true when it comes to improving the protection of whales so that their populations can grow more quickly. Unless new steps are taken, we estimate it would take over 30 years just to double the number of current whales, and several generations to return them to their pre-whaling numbers. Society and our own survival can’t afford to wait this long.

Photo of humpback whale breeching is by skeeze from Pixabay.