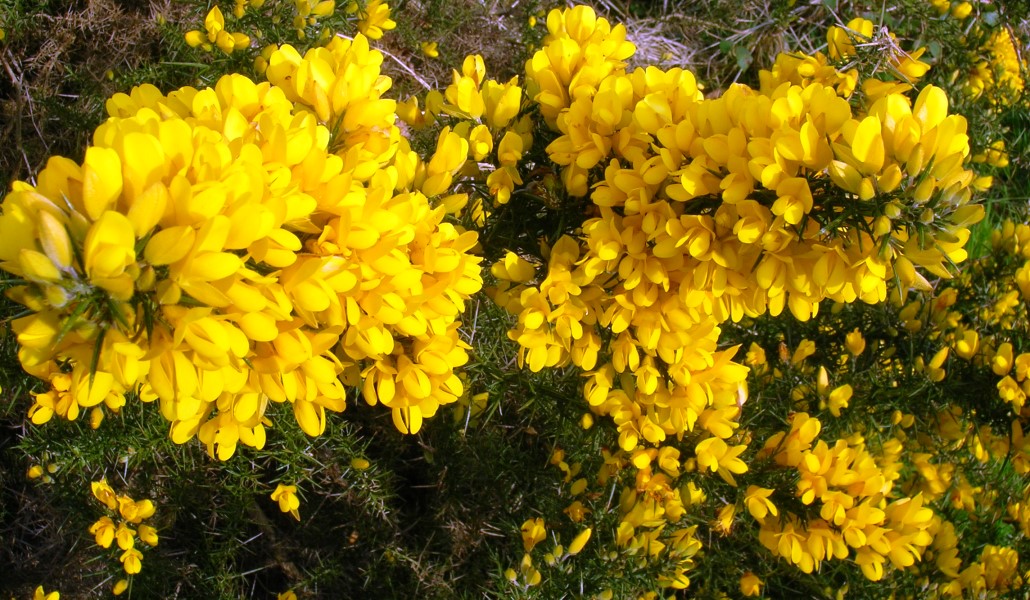 Readers of The Restoration Economy (Berrett-Koehler, 2002), Rewealth (McGraw-Hill, 2008) and RECONOMICS: The Path To Resilient Prosperity (KDP, 2020)—as well as readers of this journal, of course—are familiar with the many brilliant uses that have been found for invasive species over the years.

Many invasive plants become fuels, and many invasive animals (such as fish, boar, etc.) show up on restaurant menus. This economic value makes removing them from the habitats they’ve invaded more viable and sustainable.

That’s a big improvement over their normal approach of dousing the countryside in herbicides, or manually burning it back with fossil fuels.

Gorse bushes plague many Scottish landscapes, but they contain 17% protein, and the closely-related scotch broom boasts 21% protein content. That’s enough protein to feed literally millions of people. I (Storm Cunningham) remember scotch broom being a big problem in California when I lived out there many moons ago, so this is likely a global opportunity.

“Gorse and broom were fed to cattle at times when crops failed in the past, so we think protein from these types of plants could be used as animal food. If protein isolates are produced in the correct way, so to be safe, they could be considered as human food in the future,” Russell says.

Invasive plants offer an interesting and unconventional source of protein and the considerable investment made towards their eradication can potentially be salvaged through their revalorization. To identify viable sources, effective and high-throughput screening methods are required, as well as efficient procedures to isolate these components.

Rigorous assessment of low-cost, high-throughput screening assays for total sugar, phenolics and protein was performed, and ninhydrin, Lever and Fast Blue assays were found to be most suitable owing to high reliability scores and false positive errors less than 1%. These assays were used to characterize invasive Scottish plants such as Gorse (Ulex europeans), Broom (Cystisus scoparius) and Fireweed (Chamaenerion angustifolium).

Pressures exerted on agriculture require it to maintain profitability while ensuring adequate and sustainable food supply. The intensification strategies adopted to cope with demand are often at odds with environmental concerns, which provides scope for further investigation in unconventional and sustainable sources of nutrition. However, mitigation strategies must work cohesively with the existing system as food supply chains function in tight cohesion and any attempts at rapid or extreme changes can be met with resistance or cause disruption in the system.

Invasive plants competing with commercial crops in prime land is often a cause of hindrance to farmers, and the losses borne by them are quite significant. Bajželj et al. detail the carbon flow through agricultural systems and estimate about 13% of cropland productivity being lost through unwanted plant intrusion (equating to about 1.0 Pg of biological carbon per annum).

This is a cause of concern, particularly for subsistence farmers who may not have the resources to cope with such losses. Since low income countries tend to have agrarian economies, the impact of such losses is expected to be higher. Farmer distress is further amplified owing to the absence of compensation mechanisms and infrastructures to support them during crises.

The use of herbicides, herbivory and incineration are currently the dominant forms of plant removal. Incineration is the least satisfactory method of disposal given its contribution to pollution, the fire hazard it poses and the collateral loss of other flora and fauna, as witnessed in the recent fires in the Amazon basin and Australia. Herbicides such as glyphosate have received negative reports owing to their possible contribution towards the onset of non-Hodgkin’s lymphoma upon long-term exposure.

The concept of a circular economy provides a strong substratum upon which sustainable intensification strategies such as the revalorization of unwanted plants can be realized, through the production of leaf protein concentrates (LPC). The concept and production of LPC is well established and its nutritional relevance to the human diet with respect to essential amino acid content has been extensively reported.

Scotland presents as an interesting case as globally recognized invasive plants such as Gorse (Ulex europaeus), Broom (Cystisus scoparius) and Fireweed (Chamaenerion angustifolium) are native to the local Highlands. Having gone feral through improper horticultural management when introduced in foreign lands, the characterization of these plants may now serve to realize their nutritional potential and allow for their rapid removal and consumption in non-native lands, while promoting their conservation in their native niches.

We investigated some of the food production trends in Scotland and assessed the potential of such underutilized plants to complement the existing supply chain by introducing diversity in nutritional sources and relieving the burden currently placed on animal husbandry for high quality protein production.

Photo of gorse at Dalgarven Mill in Scotland is by Rosser1954 via Wikipedia.