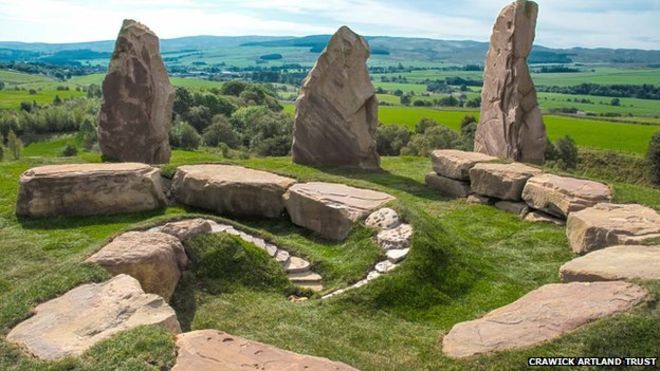 As Scotland tries to become one of the first countries to run solely on renewable energy, the question of what to do with the country’s abandoned mining infrastructure offers a unique challenge to landscape architects.

In one Scottish village, Sanquhar, the answer is to transform a former coal mine into a 55-acre work of land art. Conjuring images of Stonehenge, the art work, which opened July 10, was built from materials found on-site, including 2,000 boulders half-buried below ground.

At the urging of local residents, the landowner, Richard Scott, the Duke of Buccleuch, commissioned landscape architect Charles Jencks to build something dynamic that would benefit the region, which has been struggling economically.

“The landscape had to be healed, it had to welcome the nearby communities of Sanquhar, Kelloholm and Kirkconnel, and help restore the locality both economically and ecologically,” Jencks said. And so the Crawick Multiverse, a new version of an old scientific idea, was born.

Traditionally, former coal mines in the country are bulldozed, blanketed with grass, and returned to the pastures they once were, but this misses an opportunity to reflect the cultural significance of a site.

“Around the world, mines produce an environment which is depressing, and derelict and desolate and deserted, full of junk,” Jencks states.

“There have been laws put in place to restore these areas to their pristine original quality — that often means putting grass over the site, plowing it back, and returning it to the cows. We wanted to build something positive for the community instead,” he continued.