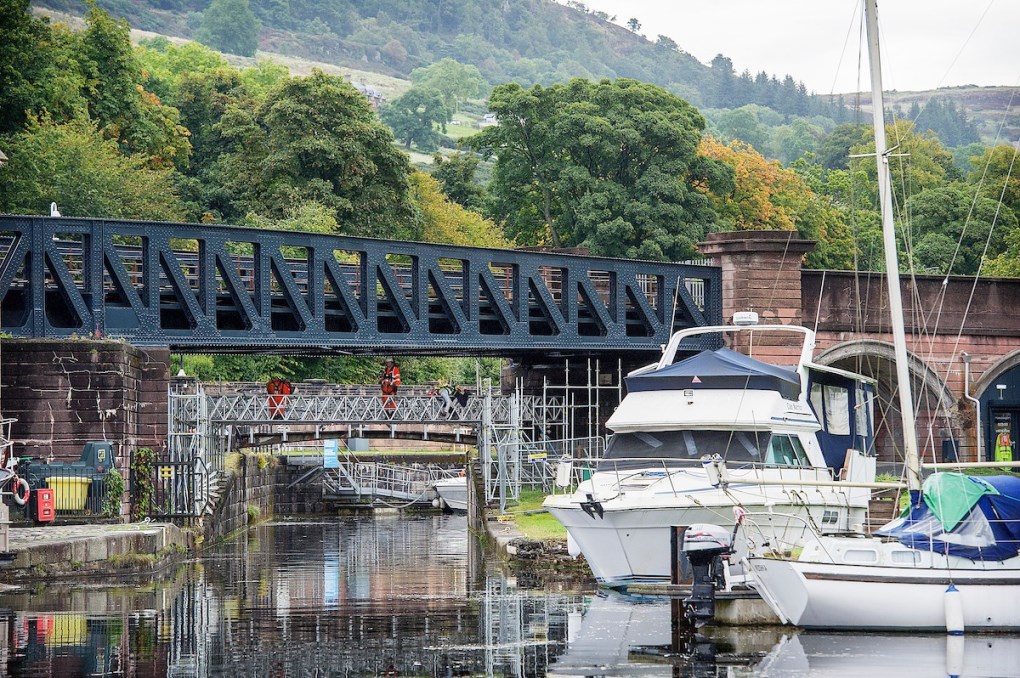 Bowling is a village in West Dunbartonshire, Scotland, with a population of about 740. It lies on the north bank of the Firth of Clyde, between the towns of Clydebank and Dumbarton. It is at one end of the Antonine Wall and therefore represents the extreme limit of the Roman Empire on the west coast of Great Britain. 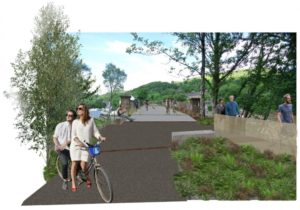 What a future linear park might look like.Rendering courtesy of Scottish Canals.

Now, an iconic, 120-year-old swing bridge, the Forth & Clyde Canal Bridge, at Bowling Harbour has been lovingly restored and could one day help create a linear park that would accelerate the already-impressive local revitalization efforts.

Scotland would thus join the dozens of cities around the world that are using the 3Re Strategy (repurpose, renew, reconnect) to repurpose and renew old rail lines into public parks that reconnect and thus help revitalize neighborhoods.

An iconic, 120-year-old swing bridge at Bowling Harbour in West Dunbartonshire has been lovingly restored as part of the latest stage of a £3.2 million transformation of the area – and could pave the way for a new linear park inspired by New York City’s High Line at the western gateway to the Forth & Clyde Canal. 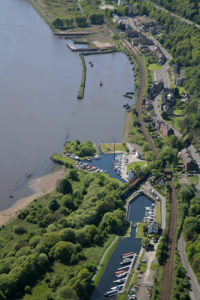 Bowling Harbour’s viaduct swing bridge was constructed in 1896 to carry the Caledonian and Dunbartonshire Railway over the Forth & Clyde Canal. After the railway was abandoned in 1960, the bridge fell into disrepair. Thanks to funding support from Sustrans and Historic Environment Scotland, Scottish Canals has undertaken vital repairs to the structure’s badly corroded metalwork and repainted the entire span.

The project is now complete and, together with the recent refurbishment of the bridge’s railway arches into commercial units, has ensured the structure will continue to play an important role in the area for years to come. The transformational work at Bowling Harbour, undertaken in partnership with the local community, has brought new businesses, activity, vibrancy and economic benefits to the canal and celebrated Bowling’s important role in Scotland’s industrial past.

“Over the past few years, we’ve been working with our partners and the local community to breathe new life into Bowling Harbour, investing more than £3.2 million in the area. The restoration of the area’s iconic railway bridge to its former glory is the next step in that story and we’re delighted to see the project completed. Now we’re looking to deliver the next stages of the masterplan we’ve helped shape with the local community – bringing further investment, employment opportunities and vibrancy to Bowling, and developing a fantastic tourism and leisure destination fitting of the western gateway to the Forth & Clyde Canal,” says Helena Huws, Design and Development Manager at Scottish Canals. 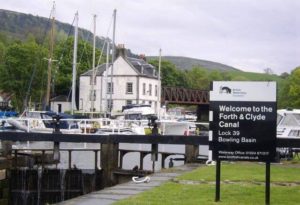 Bowling Basin in 2007 with the swing bridge in the background. Photo by Steven Sweeney via Wikimedia Creative Commons.

Fundraising is now underway for the next stage of development of the viaduct structure – transforming the former railway line into a fully accessible linear park and pathway inspired by New York City’s iconic Highline. This new route will form a direct link between the Forth & Clyde Canal towpath and the National Cycle Network route towards Loch Lomond & The Trossachs National Park. Detailed proposals have been submitted for planning approval and feature new viewpoints which will offer visitors the chance to enjoy the vistas over the canal and River Clyde.

“This is an exciting project to work in partnership with Scottish Canals for further regeneration in Bowling. It has great potential to further attract cyclists and visitors, whilst connecting the corridor as a more direct and enjoyable traffic free route. We hope this will encourage people to walk and cycle for more of the journeys they make every day,” explained Tom Bishop, Community Links Manager at Sustrans Scotland.

The masterplan for the area was shaped by the award-winning Bowling Basin Charrette – a collaborative design programme which saw the local community work with other stakeholders, agencies and industry experts to develop a shared plan for its future. The village is identified by West Dunbartonshire Council as a key regeneration and development priority. 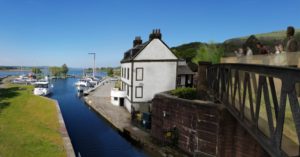 “The Bowling swing bridge is of real historical importance and it is wonderful to see it restored to its former glory as part of this ambitious project. The work already carried out Bowling Harbour has made it a destination well worth visiting and the plans for further regeneration of the area are extremely exciting,” said Councillor Iain McLaren, West Dunbartonshire Council’s Convener of Infrastructure, Regeneration & Economic Development.

Scottish Canals has, over the past few years, been breathing new life into Bowling Harbour. It’s being redeveloped into a new heritage-based tourism and leisure destination at the western gateway to the Forth & Clyde Canal.

This regeneration program has been created on the basis of a shared, collective vision for the area,  formulated with the local community and partner stakeholders. The approved masterplan forms the blueprint for the area’s future and development plans going forward – safeguarding Bowling Harbour’s rich heritage and building for its future.

To date, they have collectively invested over £3.2 million into regenerating the area, which has included the transformation of disused railway arches into commercial business space and public realm improvements to the lower basin area. 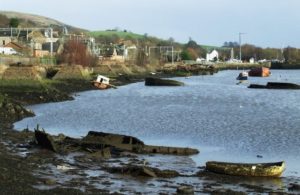 Bowling Harbour in 2008. Photo by Thomas Nugent via Wikipedia.

Bowling Basin and Harbour are at the western entrance of the Forth and Clyde Canal, also known as the Millennium Link. It is an important gateway location into the lowland canal network, located midway between Glasgow and Loch Lomond.

The former industrial area at Bowling Basin has already undergone a renaissance as a leisure destination but is plagued by poor access beyond the basin to the wider waterspace. Scottish Canals has a land holding of around 13 acres and intends that the redevelopment of this waterside area will create the momentum to unlock the remaining waterfront in Bowling.

Scottish Canals are leading the way on developing plans for a new leisure and tourism led redevelopment scheme.

The project will include improving access and links with local cycle paths as well as restoring the railway arches to provide retail and workshop facilities for local businesses. Residential moorings are also proposed as part of the recently launched Living on Water initiative. 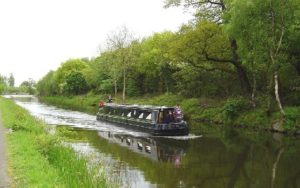 The Forth & Clyde Canal. Photo by Michel Van den Berghe via Wikipedia.

Bowling’s public leaders know that their town is already a popular tourist destination thanks to its wonderful view of the Clyde Estuary. But they feel Bowling Basin can be so much more. Potential exists to transform the area into a destination worthy of the strategic position that it occupies within the canal network.

Any such change needs to be sensitively managed, of course, and Scottish Canals are committed to working with the local community and stakeholder groups to achieve an outcome for this and future generations that everyone can be proud of.