On June 28, 2019, a spectacular new trail will help revitalize the economy of Scotland’s Hebrides Islands by creating a world-class destination for spotting whales, dolphins and porpoises from land. As other places around the world have discovered, there’s magic in connectivity.

As I often describe in my workshops, many communities and regions have a good catalog of heritage, natural, entertainment, eating, drinking and shopping destinations, but don’t enjoy the economic benefits until they effectively connect them for walking, biking or driving.

My buddy Ed McMahon—who holds the Charles E. Fraser Chair on Sustainable Development and Environmental Policy at the Urban Land Institute (ULI)—calls it “trail-oriented development.” Although, he normally uses the term to reference the way pedestrian and biking trails frequently stimulate residential and commercial redevelopment these days, the same way transit lines have been doing for decades.

Either way, connectivity is a powerful—and often overlooked—driver of economic revitalization. This oversight often derives from the fact that private money is focused on individual properties, whereas connecting all those private (and public) properties usually relies on public or charitable funding. But sometimes, as in the Scottish case cited here, many of those connections can be virtual and non-capital-intensive, requiring little funding beyond the cost of signage and a GPS app. 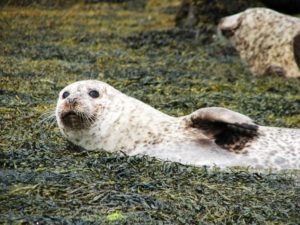 A seal on the Isle of Skye.Photo by Storm Cunningham.

The Hebridean Whale Trail, the first of its kind in the UK, is a unique initiative connecting more than 30 top places offering opportunities for land-based sightings of whales, dolphins and porpoises, or showcasing important whale heritage sites that reveal the history of people’s relationships with whales in these communities.

The trail was created by the Hebridean Whale and Dolphin Trust to help champion the conservation and restoration of the Hebrides’ globally important marine wildlife and environment.

Basking sharks, seals and other wildlife may also be seen from the trail, which features 33 sites across the Hebridean archipelago and along Scotland’s stunning west coast, from the Clyde to Cape Wrath, and as far west as St. Kilda.

These include lighthouses at the Butt of Lewis on the Isle of Lewis, Eilean Glas on the Isle of Scalpay, and the UK mainland’s most westerly point at Ardnamurchan Lighthouse. 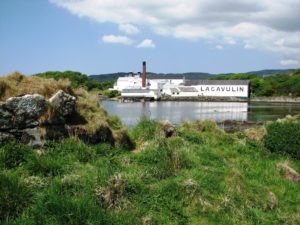 Islay, the home of my favorite whisky.Photo by Storm Cunningham.

The trail ranges from easily accessible attractions such as the Hebridean Whale Trail Centre in Tobermory, to remote and wild destinations such as the Oa on the famous whisky island of Islay.

“We want people from all walks of life to visit the Hebridean Whale Trail to enjoy exploring the region’s unique nature, culture and history, and to be inspired to support marine conservation,” he added.

The aims are also to boost the local economy and support communities through sustainable eco-tourism, provide educational opportunities, and improve connections between coastal areas. 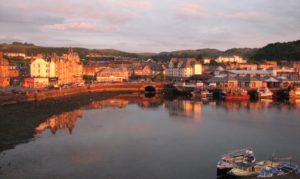 The charming town of Oban, home to my other favorite whisky. Photo by Storm Cunningham.

“The launch of this new trail is particularly apt as we prepare for the Year of Coasts and Waters 2020 – a year-long programme of events and activities which will shine a spotlight on Scotland’s coasts and waters. It’s particularly pleasing that the trail is a conservation-based tourism product, as a key focus of the themed year will be celebrating and protecting Scotland’s beautiful natural environment,” Adams added.

On-site interpretation at key locations will explain which species of cetaceans – the collective name for whales, dolphins and porpoises – might be seen.

Across the trail there will be many opportunities for visitors and residents to get involved in marine conservation activities – including joining volunteers to watch, identify and record marine wildlife from land or the ferries which connect the sites, as well as discovering more about Scotland’s seas from experts at a range of visitor centers.

“The trail encourages accessible, low-impact whale-watching from land, which for many is a completely new way of thinking about viewing marine wildlife. Scotland’s west coast is dotted with stunning places where you can quietly watch whales, dolphins, and other wildlife going about their business, from a clifftop or harbour,” said Alison Lomax, Director of the Hebridean Whale and Dolphin Trust.

“Ultimately we want people to experience the thrill of watching a fin breaking the surface in the distance, and the challenge of identifying which type of whale they’ve seen, sharing that experience with others, and learning about the threats these animals face in our seas,” she added.

While sightings of cetaceans can never be guaranteed, the Hebridean seas are exceptionally rich in wildlife. More than a quarter of the world’s whale and dolphin species have been recorded in the region, including many national and international conservation priority species.

The Hebridean Whale and Dolphin Trust is based on the Isle of Mull and has been taking action for the conservation of cetaceans off western Scotland for over two decades.