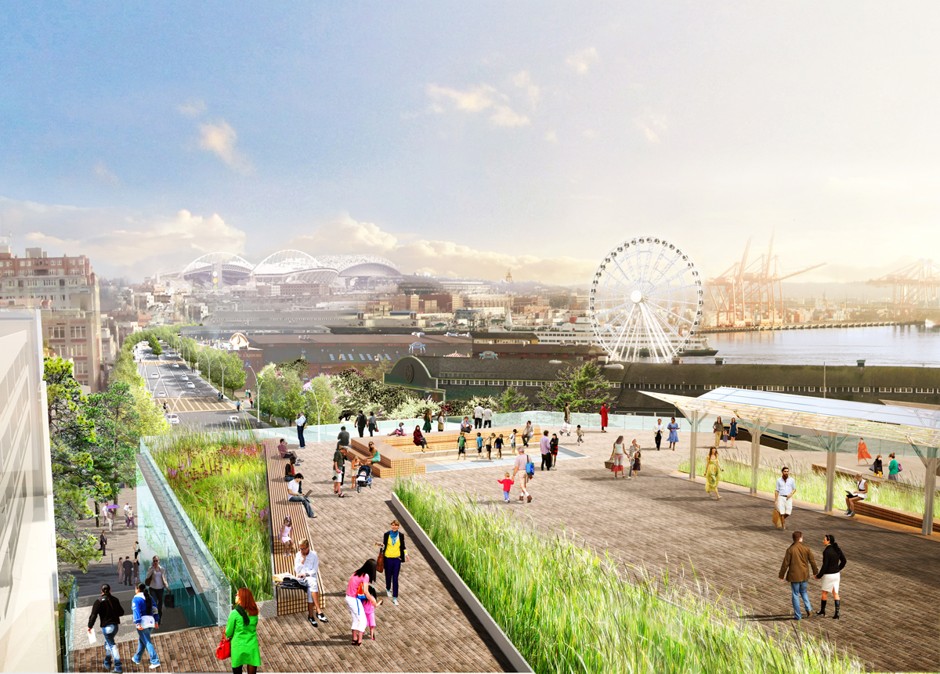 Note from Storm: I know, REVITALIZATION has already had several articles about the Seattle waterfront reinvention, and many more about similar projects in other cities around the world. But the replacement of the badly-planned (and badly-built) Alaskan Way Viaduct—which has isolated citizens from their waterfront for decades—is of personal interest to me. I met with the city’s planners (as well as local politicians and architects) back when the idea of dismantling the Viaduct and replacing it with a revitalized waterfront was just gaining a bit of momentum. So, I’ve followed this difficult, divisive, disruptive, and occasionally disaster-prone project fairly closely over the past decade. This excellent article provides an overview of the winning designs.

From the article: The Alaskan Way Viaduct is coming down, and a vast new park system is coming up. The debates cities have over tearing down elevated urban highways can be intense—what with opponents preying on commuter nightmares of crippling traffic, despite much evidence to the contrary—but deciding for removal can open up a world of opportunities for long lost public space. Just ask Seattle.

It’s been a few years since the city started to demolish the double-decker Alaskan Way Viaduct that severs downtown from Elliott Bay. And it’ll be several more until the job is done. But Seattle is already making progress on the multi-part, billion-dollar waterfront plan that will recapture acres of prime area that have lived in the shadows of the road for half a century.

“We’re excited to move into a more urban future with the waterfront,” says Marshall Foster, director of the waterfront project for the city. “We’ve been talking about removing this viaduct literally since it was built in 1953. We’ve been looking at it saying, ‘My god, what did we do?’ ”

If residents like the look of what replaces the viaduct, they’ll have landscape designer James Corner to thank. The creative mind behind New York’s elevated High Line Park, and more recently Cleveland’s Public Square, won an international competition for the project a few years back.

Foster recalls that Corner—who hails from industrial Manchester, England—“really captured the working character of Seattle’s waterfront” during a packed public meeting where he offered a three-pronged vision: