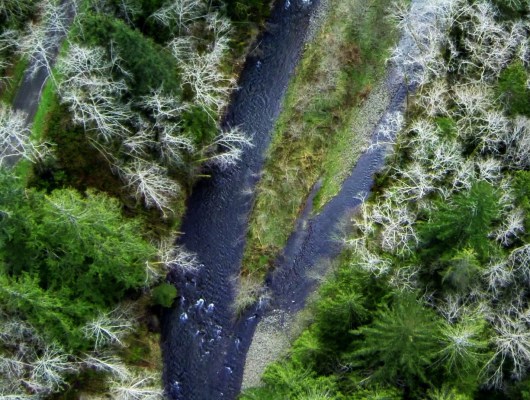 In the decades following World War Two, a nation hungry for wood products turned to the public lands of the western United States – particularly the national forests, which are managed by the Forest Service. Most of the privately owned timberland had already been cut and converted to industrial tree farms.

The public lands contained nearly all of the remaining old growth forests outside of protected parks. These were complex and ancient ecosystems, particularly on the west side of the Cascades, where the moisture from Pacific storms gave rise to rich and diverse temperate rainforests. Hundreds of species of animals and plants depended on this habitat to survive.

For 40 years, these forests were logged with the same industrial methods practiced on private land. Vast swaths were clearcut, then densely replanted with monocultures of the fastest growing trees. When they reached sufficient size, they were scheduled to be clearcut and replanted again, in an ongoing cycle considered sustainable by those who employed it.

While some might argue about whether or not it would even sustain the trees over time, it clearly wasn’t sustaining the other species that depended on the forest to survive.

This wonderful new 31-minute video, Seeing the Forest, beautifully documents how the degraded Siuslaw National Forest and its dying streams were restored. It documents how a new management regime was applied, which got away from the normal U.S. Forest Service “tree farm” approach, which severely degrades biodiversity.