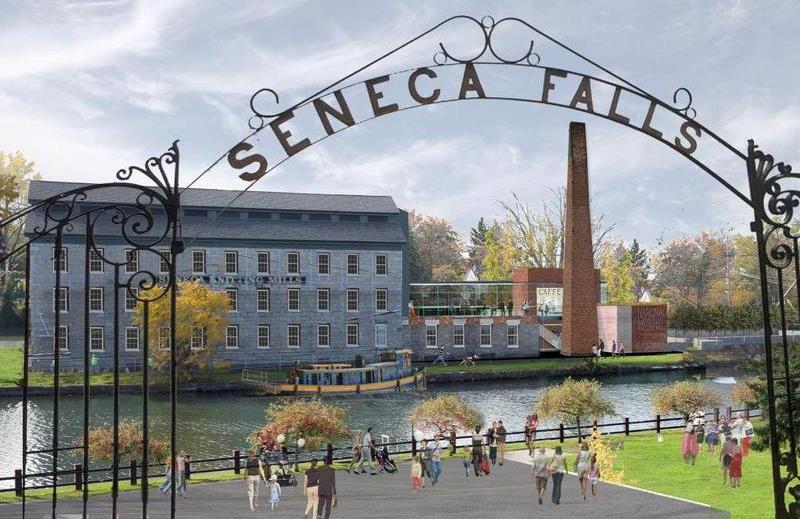 Located along the Cayuga-Seneca Canal and Van Cleef Lake, Seneca Falls, New York has a remarkable heritage and a promising future. As the birthplace of women’s rights, the town is home to the National Women’s Hall of Fame, the Women’s Rights National Park, and a variety of retail shops, professional offices, parks, and recreational activities.

Evidence of renewed vitality abounds in the downtown district, with recent efforts expanding recreational opportunities in or near downtown, preserving historic and cultural assets, and growing the local food and beverage scene, educational offerings, and retail options.

In the closing days of 2019, the folks in Seneca Falls got some great news to close-out the decade. That was when they learned that they would receive $10 million in funding as the Finger Lakes Region winner of the fourth round of the state’s Downtown Revitalization Initiative.

As in the first three rounds of the DRI, one municipality from each of the state’s 10 regional economic development regions is selected as a $10 million winner, marking another overall state goal to target $100 million in funding and investments to help communities boost their economies by transforming historic, devitalized downtowns into vibrant neighborhoods where the next generation of New Yorkers will want to live, work and raise a family. 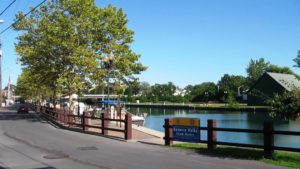 “With this funding Seneca Falls will be able to share its rich history with more people through infrastructure and commercial developments that will encourage economic growth,” New Your Governor Andrew M. Cuomo said. “Through DRI, local governments are able to actualize changes they wish to see in their communities with creative solutions to make long-lasting, positive impacts on their economies and their cities.”

Officials also cut the ribbon on the new home of the National Women’s Hall of Fame in Seneca Falls, which is located at the historic Seneca Knitting Mill building in the Town. The mill closed its doors in 1999 after 155 years in operation. Empire State Development has assisted with the hall’s relocation project through a $2.5 million dollar Restore New York grant awarded in 2010; and another $500,000 in assistance through Market NY. The NYS Canalway Grant program provided a total of $300,000 for the project; The Office of Parks, Recreation and Historic Preservation provided $830,000 for the Hall upgrades. Work ahead consists of moving in, planning for exhibit design and implementation as well as fundraising for all the phases that will finish the whole building.

“With funding from the Downtown Revitalization Initiative, Seneca Falls will continue to flourish as an integral part of state and national history,” said Lieutenant Governor Kathy Hochul. “As the birthplace of the women’s rights movement and a charming part of the Finger Lakes, Seneca Falls is primed for continued investment that will positively impact downtown growth. With this once in a lifetime opportunity, Seneca Falls will develop a roadmap for the future with innovative projects focused on boosting the local and regional economy.”

With the DRI award, Seneca Falls will take the next steps towards realizing its vision for a mixed-use downtown primed for commerce, tourism, education, the arts, and full-time living and supported by up-to-date infrastructure and a thriving year-round economy.

Secretary of State Rossana Rosado said, “The Downtown Revitalization Initiative continues to lead the way in reviving areas across New York State where people live, shop and work. Thanks to the Governor’s program and vision, Seneca Falls will benefit by drawing upon its rich heritage and creating areas of investment to grow and build into the future.”

The Finger Lakes Regional Economic Development Council went through a competitive review process of proposals from communities throughout the region and considered all seven criteria below before recommending Seneca Falls as its nominee for winner:

Empire State Development Acting Commissioner and President & CEO-designate Eric Gertler said, “The transformative Downtown Revitalization Initiative will invigorate Seneca Falls with economic opportunity and investment by encouraging business development and job creation. Seneca Falls holds an important distinction within our nation’s history and will serve as a crucial catalyst for our economic development efforts throughout the Finger Lakes region.”

Assembly Minority Leader Brian M. Kolb said, “As the birthplace of the women’s movement, Seneca Falls will always hold a special place in our nation’s history. Today we recognize the incredible achievements of the past and the bright future this community can look forward to. With new state investments into downtown revitalization and the continued renovations to the new Women’s Hall of Fame, Seneca Falls has much to celebrate.”

Seneca Falls will now begin the process of developing a Strategic Investment Plan to revitalize its downtown with up to $300,000 in planning funds from the $10 million DRI grant. A Local Planning Committee made up of municipal representatives, community leaders, and other stakeholders will lead the effort, supported by a team of private sector experts and state planners.

The Strategic Investment Plan for downtown Seneca Falls will examine local assets and opportunities and identify economic development, transportation, housing, and community projects that align with the community’s vision for downtown revitalization and that are poised for implementation. The downtown Seneca Falls Strategic Investment Plan will guide the investment of DRI grant funds in revitalization projects that will advance the community’s vision for its downtown and that can leverage and expand upon the state’s $10 million investment. Plans for the DRI’s fourth round will be complete in 2020.