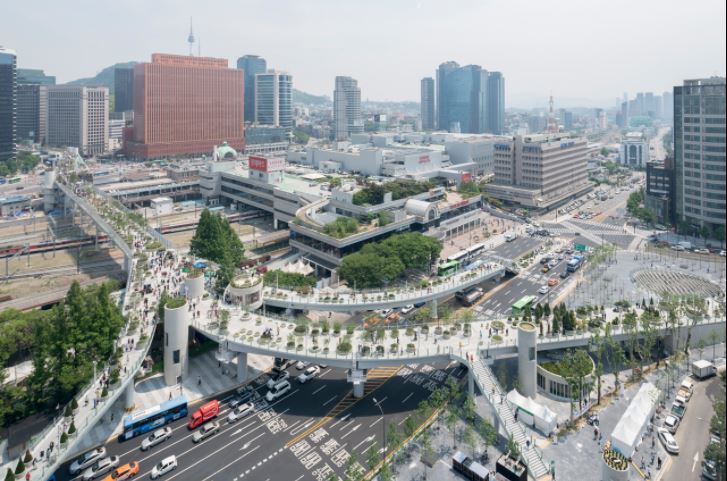 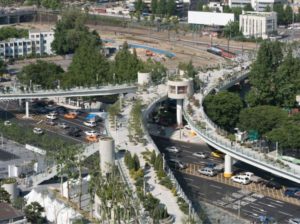 It’s a 983-meter floating botanical walkway made from a repurposed former urban highway.

Now, instead of fragmenting the neighborhoods and inflicting both noise and air pollution of local residents–as it has for decades–the ugly highway is reconnecting neighborhoods, cleaning the air, and beautifying the city.

The infrastructure has been reborn as a linear park with over 200 local species of trees, shrubs and flowers, all of which are lined as a walkable plant library for residents and visitors to the city. It was designed by the Dutch firm, MVRDV, which readers of REVITALIZATION will know from their many other spectacular urban redevelopment projects around the world (ncluding the original announcement of this project in 2015). “Skygarden offers a living dictionary of plants which are part of the natural heritage of South Korea,” said Winy Maas, co-founder of MVRDV. 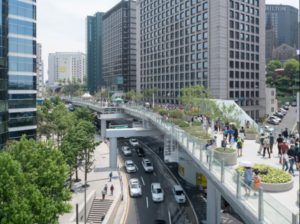 Seoullo, the Korean name for Skygarden, translates to “towards Seoul” and “Seoul Street”, while “7017” marks the overpass’ construction year of 1970, and its new function as a public walkway in 2017. The pedestrianized viaduct next to Seoul’s main station is the next step towards making the city–and especially the central station district–greener, friendlier and more attractive, all while connecting all patches of green in the wider area.

The park boasts 24,000 plants. Besides the shrubs and flowers, the many newly-planted trees will grow to their final heights in the next decade, making the project even more spectacular, and more of a green infrastructure amentity. 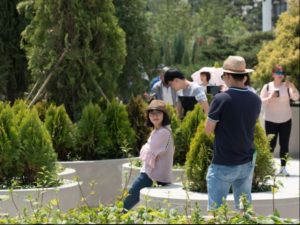 Since the project was won by MVRDV in May 2015, the main challenge of the Skygarden has been to transform the existing overpass into a public garden, overlaying a matrix of Korean flora onto the 16-meter elevated steel and concrete structure. How to transform a 1970’s highway into a Skygarden and how to change the daily life of thousands of people who cross Seoul’s city center every day?

From the start, MVRDV engaged with this need to change the forgotten and existing infrastructure into a green symbol that will become a catalyst for a greener quarter for Seoul. Together with the municipality, local NGO’s, landscape teams and city advisers are committed to accommodating the biggest diversity of flora into a strictly urban condition. New bridges and stairs connect the viaduct with hotels, shops and gardens. 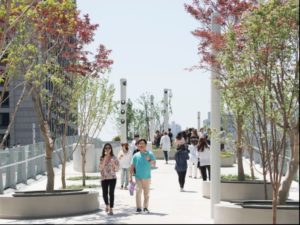 The linear park was designed as a collection of small gardens, each one with its very own composition, perfume, color and identity.

The landscape will change according to the seasons: the bright colors of leaves in autumn of the Aceraceae family (maples), the blossom of cherry trees and rhododendron in spring, the evergreen conifers trees in winter and shrubs and trees bearing fruit in summer.

In the future, the overpass will evolve with new plants and new activators so as to become an “urban nursery”, rearing trees for the surrounding districts. 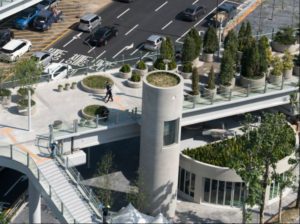 Additional structures of stairs, lifts and escalators as well as new “satellite” gardens, can connect to the Skygarden, sprouting like branches from the existing structural piers.

These extensions can inspire further additions to the area’s greenery and public spaces, and will connect the Skygarden to its surroundings both physically and visually through plant species related to each of the neighborhoods. 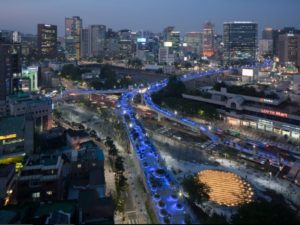 At night, the Skygarden is illuminated in blue lights in contrast to the bright city lights as the color is friendly to nature. During festivals and celebrations, different colors can also be changed.

All of this contributes to enhancing the experience of users, boosting the park with activities that engage the city on a cultural and commercial level.

Small mobile pots are added for seeds and plants that can be used afterwards in the bigger pots. A living nursery. Multiple stairs, lifts, bridges and escalators connect the city to the new park, rebounding it to the adjacent urban fabric.