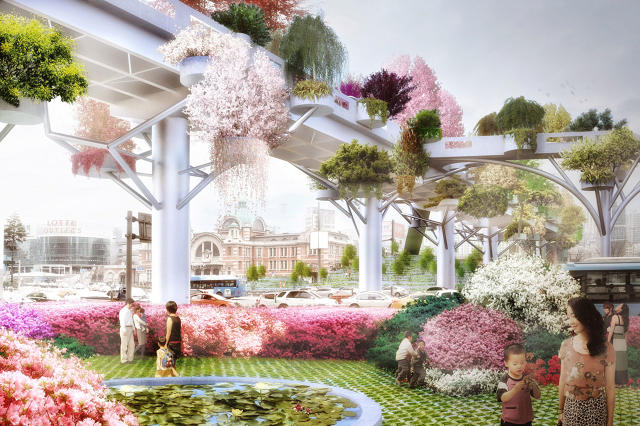 Note from Storm: It started with turning a badly-planned urban highway—that hurt quality of life, reduced property values, and divided neighborhoods—back into the ancient Cheonggyecheon stream that highway engineers had buried over half a century earlier. That was so successful that Seoul, South Korea launched into a program of demolishing, redesigning, or repurposing all such transportation planning mistakes. This article describes the latest in this visionary, world-leading process of transformation and revitalization.

From the article: When city planners in Seoul discovered that a major highway overpass was no longer safe for heavy traffic in 2006, they planned to tear it down and rebuild the road. But after countless meetings over the last several years, the city decided to take a different path: The highway will turn into a tree-covered pedestrian path.

At the moment, the 3,000-foot highway is still filled with cars. But by the end of 2017, the city plans to fully convert it into a park and pathway.

“By converting the infrastructure into a pedestrian zone, Seoul is trying to reclaim the pedestrian quality of the city,” says Winy Maas, director and principal architect for MVRDV, the Dutch architecture firm that won a competition for the park’s new design.