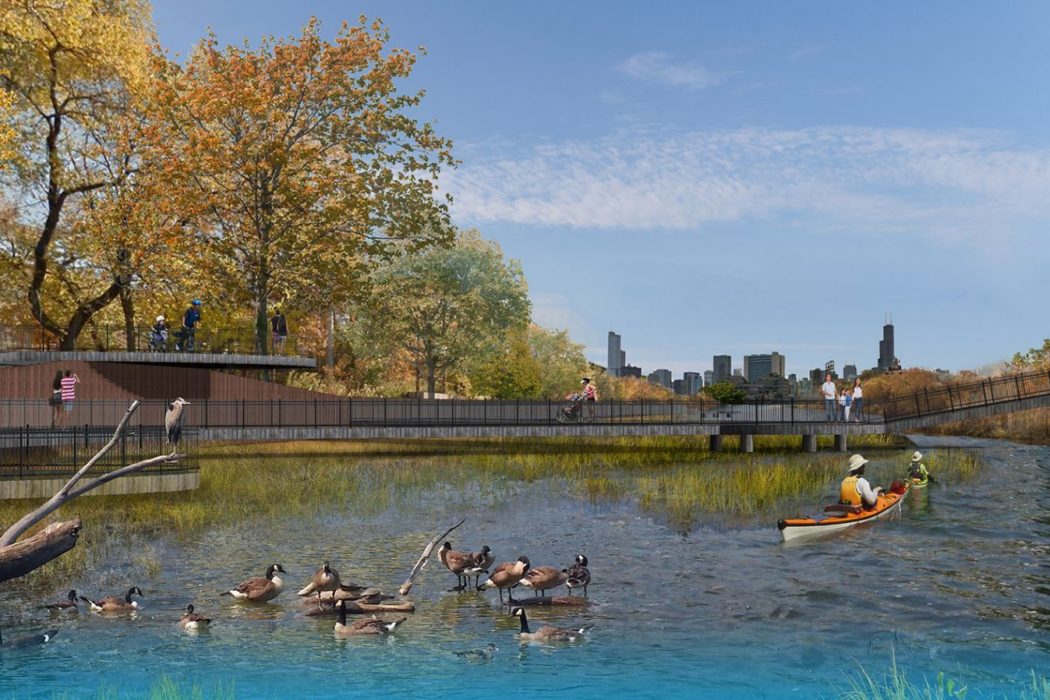 On August 17, 2016, a plan that aims to allow swimming in Chicago’s waterways in less than 15 years was unveiled by the city and partnering nonprofits.

The initiative, called Our Great Rivers, lays out specific goals between now and 2040 to improve the environment, infrastructure and economic potential of the Chicago, Calumet, and Des Plaines rivers.

The goals range from feasible to idealistic: CTA train announcements that signal river crossings are simple; making the three rivers pollution- and odor-free by 2040 is no doubt more difficult to achieve.

Improved pedestrian access and connections from the nearby Ashland CTA Orange Line station, buses on Ashland Avenue and 31st Street, and a water taxi stop would welcome residents of Pilsen, Bridgeport, McKinley Park, Chinatown and beyond to this historic place along the South Branch.

A new pedestrian bridge over Bubbly Creek will improve access to and from the part of Bridgeport on the east side of the creek.

Improvements at La Villita Park and El Paseo create a unique opportunity to activate the now-stagnant Collateral Channel as green space and a waterway to connect residents to the river. For residents today in Little Village, the Collateral Channel is notorious for its odor, rather than its potential as an inviting riverfront.

By addressing odor issues and creating open space for recreation like family picnics, the Collateral Channel could become a major hub of riverfront use that would connect the community to their river and adjacent park and trail amenities.

The Collateral Channel of the future could be one of better water quality, healthy wetlands and thriving ecosystems. It could be the principal access point to the Chicago Sanitary and Ship Canal for both boats and riverfront trail users.

Along the southwestern bank of the Chicago River sits the shallow North Branch Canal, which is off-limits to large barges and boats. With the right mix of tough and attractive native plant species, the channel could support a thriving, biodiverse wetland with migratory birds, waterfowl and turtles.

This stretch of water that forms the east side of Goose Island (pictured at top) would be an ideal spot for novice and expert kayakers, fisherman and birdwatchers alike seeking a quiet, natural playground for recreating on the river.

Just north of 138th Street between Halsted Street and Ashland Avenue is Lake Riverdale, largely out of sight and reach to residents. This open marsh could be restored to ecological health to provide ecosystem services such as managing stormwater and alleviating the urban flooding incidents in the area. 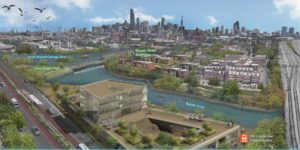 In its current form, the plan is primarily a blueprint, according Josh Ellis, program director of the nonprofit Metropolitan Planning Council.

Ellis is leading the project and the MPC spearheaded it, in collaboration with city government, environmental nonprofit Friends of the Chicago River and other partners.

A few of the projects are already underway, including efforts by the Metropolitan Water Reclamation District to deodorize the Collateral Channel, a quarter-mile slip off of the Chicago Sanitary and Ship Canal in the Little Village neighborhood.

But most of the goals are still theoretical, such as turning landfills and abandoned railroads along the Chicago and Calumet rivers into natural wetland habitats. 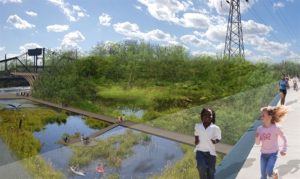 The vision statement for Great Rivers Chicago says: “By 2040, Chicago’s rivers will be inviting, productive and living, providing everyone with opportunities to find or create their own place, their own experience and their own community on our rivers. Our rivers will invite us to engage in stewardship, recreation and work. Our rivers will connect people to nature, in the city and beyond, and function as thriving ecosystems. Our rivers will be the best of us, where communities, habitats and businesses prosper together. Ultimately, our rivers will define us, rivaling the lakefront in our hearts and minds, and become a key source of pride for metropolitan Chicago.”