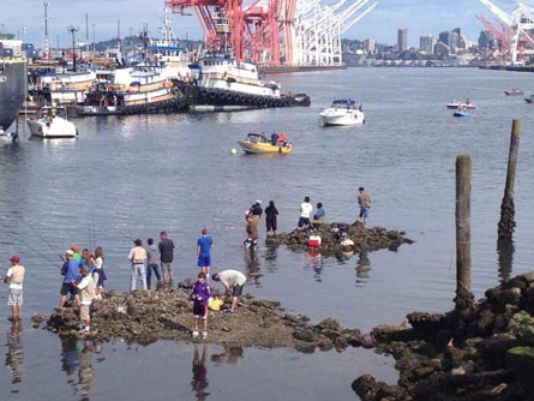 My friend Sam called from the banks of the Duwamish River, in the industrial heart of Seattle, Washington, planes overhead, trains nearby, truck traffic whooshing past. On a cloudless day of high-def perfection, he was excited by a frenzy of sex. Salmon sex.

The river, once a junk-hold of toxins and tires, still a Superfund site, was alive with big fish summoning all their remaining energy for a chance to mate and die.

The Duwamish was a dump in the 20th century, dredged, straightened, running past the Boeing plants that turned out B-17s, the Flying Fortresses used to bomb Nazi Germany. Yet it still has a pulse of the wild, as evidenced by returning salmon.

Most cities have lost that duality. It was very big deal when a couple of Atlantic salmon were found in the River Thames at the edge of London in 2011. And the French were mesmerized, in 2009, by the appearance of a few salmon in the Seine, passing by Paris.

But you don’t need to go to the far north to see this. Up to seven million pink salmon were in Puget Sound this year.

The Columbia River, after decades of decline, has seen strong returns this fall of Chinook, the mighty kings — more than a million so far passing the counting station at Bonneville Dam.

[Photo of urban salmon fishing in Seattle by KING5 News]