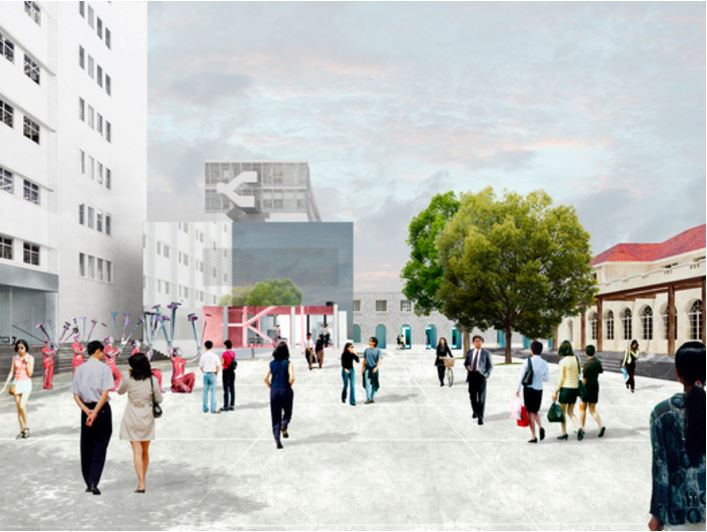 Rotterdam-based architectural firm OMA has released a new masterplan for redeveloping and revitalizing Columbia Circle, a historic site in the center of Shanghai, China.

Columbia Circle is the first urban regeneration project in the core area of Shanghai to be performed by the Chinese real estate developer Vanke. It will transform a vacant 4.7 hectare compound into a new part of the city with a publicly accessible mixed-use program. 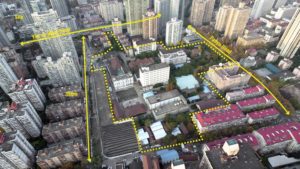 Columbia Circle is a site with a rich and layered history, including both preserved colonial monuments and former industrial buildings.

The original buildings of the Columbia Country Club, from which the project derives its name, were designed by American architect Elliott Hazzard during the grand epoch of Shanghai in the 1920s for the prewar American elite society and include the former clubhouse, a gym and an outdoor pool.

Another historical building on the site is a villa designed by Hungarian architect László Hudec in 1930, owned by Sun Ke, the son of Sun Yat-sen. In 1952 the Shanghai Institute of Biological Products moved into the premises and gradually developed a research campus with production facilities, offices, warehouses and laboratories.

OMA’s renewal strategy combines the careful transformation of both the existing monuments and the industrial buildings with the introduction of three new buildings, which extend the repertoire of spaces and offer programmatic possibilities not available in the existing buildings. The site will include a diverse mix of offices for creative businesses, hotel, event space, cultural venues, retail spaces and restaurants distributed over the entire site, enlivening the pedestrian experience. Two new access points will improve the accessibility of Columbia Circle from the surrounding streets and connect the outdoor spaces designed by landscape architects West 8.

With Columbia Circle, OMA further expands its portfolio related to historic preservation projects and redevelopment of existing structures, which includes the regeneration of industrial site Largo Isarco for the establishment of cultural venue Fondazione Prada (Milan, 2015); the redevelopment of a Soviet canteen in Garage Gorky Park into Garage Center of Contemporary Art (Moscow, 2015); the renovation of Fondaco dei Tedeschi (Venice, 2016); and the redesign of former coal mine Zeche Zollverein (Essen, 2007) into a museum and visitors center.

OMA’s approach to regeneration, respecting the multi-layered history and current character of the site, fits with the present-day preservation and redevelopment ambitions in China. After the recent completion of Shanghai Lujiazui Harbour City Exhibition Centre, Columbia Circle is OMA’s second project in Shanghai. OMA is collaborating with ECADI (LDI) and West 8 (landscape architect) on this project.

OMA is an international practice operating within the traditional boundaries of architecture and urbanism. AMO, a research and design studio, applies architectural thinking to domains beyond.