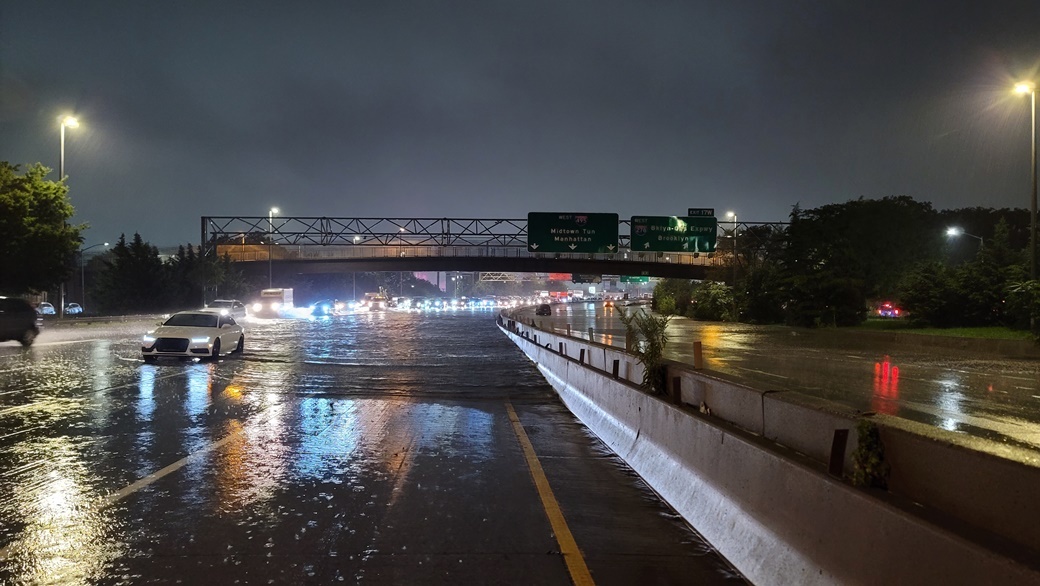 The Feature Article of this issue of REVITALIZATION focuses on New York City‘s grand $7 billion proposal to boost climate resilience for a small section of southern Manhattan.

Massive redesign and green infrastructure efforts such as that one ay garner the headlines, but three researchers at Columbia University‘s Climate School suggest that major improvements in resilience can be achieved via such mundane activities as efficient trash removal and other city maintenance.

They claim that the disastrous budget cuts of former Mayor Bill de Blasio led directly to unnecessary deaths during 2021’s Hurricane Ida, specifically as a result of flooding that resulted from the buildup of uncollected trash in the storm sewer system.

Here’s an article written by Yunus Kovankaya, Sara Schwetschenau and Upmanu Lall, published on January 6, 2022 on the website of the Columbia Climate School (reprinted here by permission):

It has been four months since rain from Hurricane Ida flooded the streets and homes of New York. The subway stations and basements in all boroughs that were flash flooded made the news for a couple of weeks, but may soon be forgotten. Yet, the city’s relief agencies are still spending millions of dollars supporting affected homeowners, and distributing food, clothing, and funds to people who were displaced. The recovery efforts are laudable, but many families will take years to get back on their feet. Sadly, 11 people perished in their basements in Queens. Could much of this impact have been avoided?

The flooding in September was made worse by drainage networks clogged with trash. Over the past four years, the city government has reduced the number of trash cans on street corners, ostensibly to reduce trash buildup, but practically to reduce collection costs. More recently, it decreased the frequency of checking for blockages in storm drains from once a year to once every three years. Mayor de Blasio’s $106 million budget cut in June 2020 worsened the situation by decreasing public litter basket collection by 60%. These measures have already increased the amount of litter on the streets, may have contributed to the burgeoning rat population, created public health hazards for low to medium income neighborhoods, and decreased overall quality of life.

Mayor de Blasio argued Ida is an unprecedented, unpredictable result of climate change. In response to climate change risks, New York City has been pursuing large infrastructure resiliency projects. Planning and design of a sea wall that may cost over $119 billion around the “high value assets” in Lower Manhattan is in progress to address the worst-case scenario of climate change predicted by the IPCC. It is ironic that savings of millions of dollars to curtail trash and sewer cleanup led to adverse flooding outcomes for the poorer residents, while billions are proposed to be spent to protect Wall Street and its environs. Of course, risk of sea level rise threatens all of NYC and enlightened solutions are needed. However, protection from climate change doesn’t justify reductions in quality of life provided by “small” resources to solve our current problems. Let us not drown in trash. Without basic drainage infrastructure maintenance, even modest rainfall events could cause this type of flooding, and exacerbate the impact of larger events.

While trash removal may initially seem unrelated to flooding, urban systems are highly interconnected. Street trash finds its way into the storm drains after modest rain events — the city looks magically cleaner — but you can imagine where the street trash has gone. By reducing the frequency with which the storm drain blockages are checked, this trash builds up and reduces the capacity of the drainage network. Localized nuisance flooding can result under even small storm events, and under superstorm conditions, the results are magnified, with large quantities of water unable to pass through the sewage drains. The water overflows back into the street, and into basements that low income families live in due to a lack of affordable housing. It is difficult to price the impact of all these negative outcomes that result from budget-conserving measures aimed at trash and drain unclogging, but the latest event should serve as a reminder for balance between new, major infrastructure and less noticeable maintenance.

The city is pushing forward several new flood mitigation infrastructure projects. The sea wall project would be implemented by the incoming Adams administration. De Blasio’s current administration has already spent $1.9 billion to reduce flooding in Southwest Queens in 2018. According to WeGov.NYC, $198.7 million is planned for new stormwater mitigation infrastructure like bioswales and green streets in some areas. These technologies can be cost-effective, but don’t address current flooding, and half of them are running three years behind schedule. Further, without existing system maintenance, trash removal, and drain clearing, this will be money spent with little benefit. Does $300 million in “green infrastructure” spending for stormwater control in a small fraction of the city offset the city-wide damage caused by the $100 million spending cuts that contributed to the storm flooding?

Since March 2021, the city has restored sanitation services using federal government aid for COVID relief, but it is not enough. During Ida, the majority of the city’s 153,000 catch basins were clogged with trash, forcing locals to run outside during the storm to clean the drains themselves. New York is not alone in these issues; Philadelphia’s Office of Emergency management implored residents that live near storm drains to clean out their catch basins prior to Hurricane Ida.

These events all point to a need for improved infrastructure maintenance and new flood mitigation infrastructure. Unlike new water infrastructure, more frequent trash collection services are a cost-effective solution that can be implemented immediately, and have benefits beyond reducing the risk of flooding in low-lying neighborhoods. The maintenance cost of cleaning out these drains is far cheaper than the aid the city is providing for the homes of uninsured citizens.

The most vulnerable people in NYC need the city government to step up before the next flash flood event or superstorm. The current trend of building tens of millions of dollars in “green stormwater infrastructure” has only resulted in middle and lower income neighborhoods waiting for overdue and over-budget projects. Our solutions need to consider the interconnectedness of our city’s infrastructure, where small changes in maintenance such as trash pickup can have cascading effects, such as basement flooding. If we are willing to adopt this mindset, we can ensure that families will not suffer from preventable tragedies like the ones we saw in Queens in September.

Photo by Tommy Gao (via Wikimedia) shows flash flooding on the Long Island Expressway during Hurricane Ida in September of 2021.