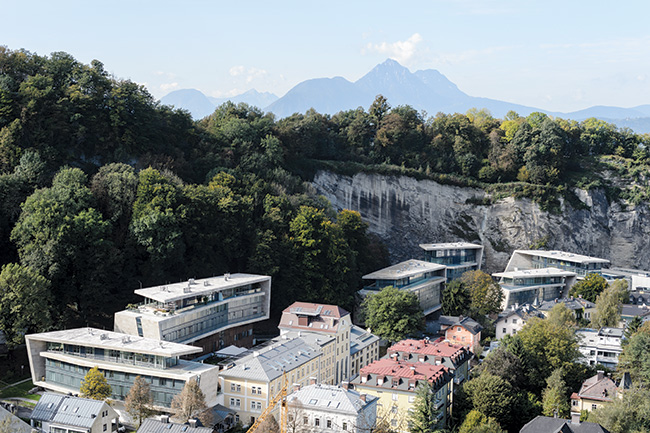 An abandoned sandstone quarry on Rainberg Mountain, above the historic city of Salzburg, Austria, is hardly the place one would expect to find a desirable urban neighborhood.

But, nevertheless, that’s where developer Asset One decided to build 100 units of housing. The architectural jury selected the Hariris’ scheme for honors because it sensitively integrated new buildings into the spectacular topography.

When New York–based architects Gisue and Mojgan Hariri first visited in 2006 in response to an invited competition, they found the site “derelict and magical.”

Known as the Sternbrauerei, the quarter was dominated by the quarry’s soaring rock face to the west but also contained a defunct landmarked brewery and its storage vaults. Nineteenth-century villas and more recent low-rise apartment buildings border the northern edge, while a forest rises to the south.

In 2007, New York based Hariri & Hariri announced the groundbreaking of the $80 Million Sternbrauerei (“Star Brewery”) luxury residential and mixed-use complex on the last remaining large-scale buildable site in the heart of Salzburg, Austria. The development breaks ground September 20th, 2007 coinciding with the world-renowned Salzburg Festival. The projectʼs six new and two historic structures will comprise luxury urban condominiums, premium penthouses, artistʼs studios, an exhibition space, a restaurant, spa facilities, garden spaces and a public waterside promenade on a five acre site at the foot of the Rainberg Mountain.

The projectʼs developers are Asset One Real Estate Development Corporation AG based in Graz, Austria. The project is scheduled for completion in late 2009. “This is conceptually, the culmination of nearly twenty yearsʼ work for us,” says principal Gisue Hariri. “It is our largest and most multifaceted project to date, giving us the opportunity to not only build a unique complex, but to truly create a landmark within Salzburgʼs essentially 18th Century cityscape – a highly contextual, yet distinctive beacon of the 21st Century, in a place that time has largely passed by. We hope Sternbrauerei will become a beloved landmark for its residents, citizens and travelers to Salzburg.”

Eighty luxury residences will occupy the six new structures on the site, none of which reach more that eight stories in height. The scale of the buildings and site as designed by Hariri & Hariri are intended to be a microcosm of the city of Salzburg itself, complete with a manmade canal, representing the Salzach River, carved between the vertical rock face of the mountain and the site. As levels on the site change the canal creates waterfalls, which in turn produce dramatic views at grade level for the spa, restaurant and public promenade at watersʼ edge. The program also includes exhibition space for the House of Architecture, a gallery and lecture space to be run by Initiative Architektur Salzburg, in the old breweryʼs underground vaults.

Covering the subterranean facility will be a public green space punctured by sculptural skylights jutting from the ground. Located directly adjacent to the Rainberg, the oldest historic area of settlement in Salzburg, the project will be a five minute walk from Salzburg Festival district. Formerly a quarry for the Salzburg Palace and city churches, the rocky site subsequently became the Stern Brewery, which ceased operation some 50 years ago. It is from the rocky cliffs facing the site to the south, where the project gets is conceptual inspiration, and which provides a striking backdrop to the angular forms of the six new residential structures.

The new structures simulate the rock formations and random compositions of the Rainberg quarry site, where the buildings form angular “shard-like” volumes stacked in a seemingly random fashion, but designed to take optimal advantage of light and views. Through this concept, the mountain achieves a dialogue with the new limestone and glass enclosed structures, providing a sense of harmony and continuity with the surrounding mountain, water and sky.

Established in 1986 by Cornell educated, Iranian born sisters Gisue Hariri and Mojgan Hariri, New York City based Hariri & Hariri is internationally acclaimed for creating their own visionary brand of conceptual yet sensual, provocative yet poetic designs.