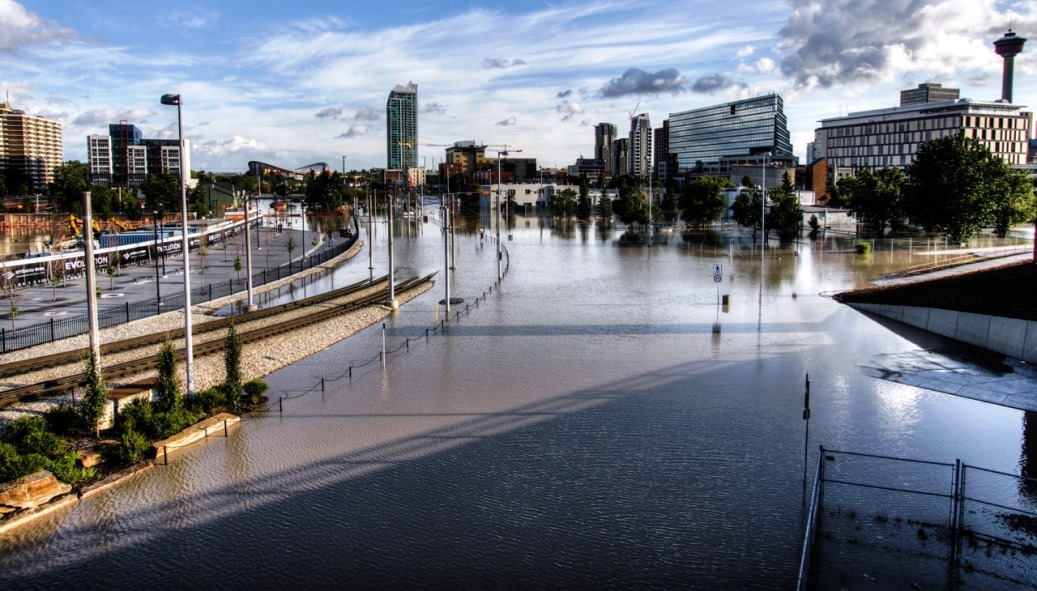 I (Storm Cunningham) was in Alberta shortly after the disastrous floods of 2013, doing a keynote at a conference organized by the Calgary Foundation. While in town, I was taken of several tours to see the urban and rural damage, and the many restoration projects. 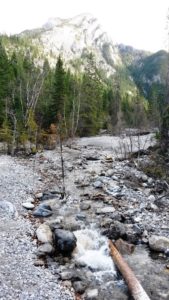 Flood-damaged trail in a provincial park near Calgary. Photo by Storm Cunningham.

Areas along the Bow, Elbow, Highwood, Red Deer, Sheep, Little Bow, and South Saskatchewan rivers and their tributaries were particularly affected. A total of 32 states of local emergency were declared and 28 emergency operations centers were activated as water levels rose and numerous communities were placed under evacuation orders.

Five people were confirmed dead as a direct result of the flooding and over 100,000 people were displaced throughout the region. Some 2,200 Canadian Forces (CF) troops were deployed to help in flooded areas in addition to the Royal Canadian Mounted Police and Alberta Sheriffs Branch response.

Total damage estimates exceeded $5 billion (CAN) and in terms of insurable damages, made the 2013 Alberta floods the costliest disaster in Canadian history at $1.7 billion (CAN), until the occurrence of the 2016 Fort McMurray wildfire. Receding waters gave way to a mammoth cleanup of affected areas, aided by a spontaneous volunteer campaign in which many home owners were assisted by complete strangers.

Now, on November 12, 2019, the province has boosted efforts to enhance its resilience. Alberta’s “Budget 2019” include over $43 million for 15 resilience projects in Calgary—and other municipalities and Indigenous communities across the province—that are designed to help keep families, property and infrastructure safe.

Funding from the province means municipalities and First Nations can move forward with flood-resilience projects to reduce the impact of future floods and will be well-positioned to secure federal funding for these projects.

“Albertans have seen first-hand the devastating impacts flooding can have on families, communities and our economy. That’s why improving flood resilience in communities across Alberta is so important. Confirming provincial funding ensures these important projects remain on schedule and that our municipal and First Nations partners have an opportunity to apply for federal funding, which could further leverage the province’s investment,” said Jason Nixon, Minister of Environment and Parks.

Municipalities will receive previously committed funding, although the disbursement schedule for the two Calgary grants has been modified to provide the province additional budget flexibility. Now, $10 million of Calgary’s $15 million in approved grants will be disbursed in fiscal 2020-21. The revised disbursement schedule will not affect project timelines or the city’s ability to apply for federal funding.

“The ACRP project funding is critical to seeing our flood-mitigation plan come to successful completion in a reasonable timeframe. We are so pleased to see this announcement and credit Minister Nixon and his staff for this great decision. As a small, northern community, we often feel the focus of government decisions rests with larger municipalities or those closer to the central region but this renews our hope for ongoing strong partnership and support,” added Kate Potter, mayor of Sexsmith.

“The Town of Westlock is extemely pleased that this project will proceed. I have personally spent significant time with our MLA, Glenn van Dijken, as well as the ministers of Environment and Parks and Municipal Affairs on this matter. We’ve worked hard to complete our stormwater and sanitary master plans and always have had confidence that the province would recognize the importance of this project to our community,” said Ralph Leriger, mayor of Westlock.

Since the inception of the Alberta Community Resilience Program, the province has provided more than $230 million to municipalities and First Nations for flood-resilience projects that will help ensure public safety, protect critical municipal infrastructure and better manage stormwater. Overall, 49 municipalities and four First Nations have received funding through the program.

Photo by Ryan L. C. Quan shows the East Village in Calgary, during the floods of 2013.