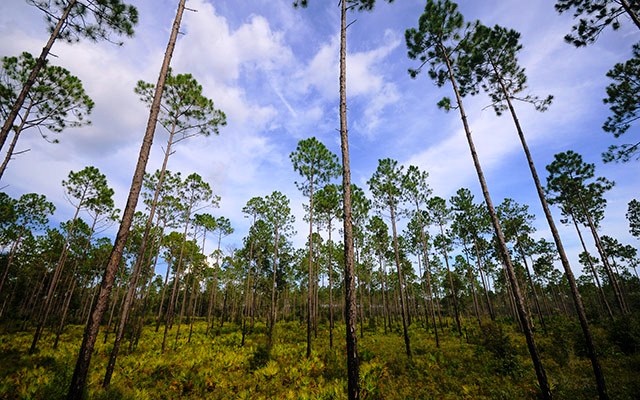 Unique to the southeastern United States, the longleaf pine ecosystem once encompassed more than 90 million acres, reaching from Virginia to Texas. This fire-adapted ecosystem contains a stunning diversity of plants and animals, including rare species such as the red-cockaded woodpecker, gopher tortoise and indigo snake, as well as important game species such as bobwhite quail, wild turkey and white-tailed deer.

Today, that area has shrunk to only four million acres. But there’s an ongoing public-private partnership that’s been working to restore that important ecosystem in the southeast United States for six years.

And on August 15, 2017, that partnership got a $5.5 million boost from the National Fish and Wildlife Foundation (NFWF) when they announced new grants to support the restoration of the longleaf ecosystem in nine states. Awarded through the Longleaf Stewardship Fund, the grants are expected to generate more than $7 million in matching contributions for a total conservation impact of $12.5 million.

“We are extremely excited to play a leading role in the America’s Longleaf Restoration Initiative and celebrate this million-acre milestone for the Longleaf Stewardship Fund,” said Cindy Dohner, the U.S. Fish and Wildlife Service’s Southeast regional director. “We are equally excited about the habitat restoration work that will be accomplished through these awards to conserve and improve nearly 300,000 acres of habitat working with hundreds of private landowners. Work at that scale will benefit the iconic gopher tortoise and nearly 300 other species that call this longleaf pine habitat home. And it contributes to our collective effort to deliver good conservation on the ground that has so far played an important role in helping us keep more than 100 at risk fish, wildlife and plants off the list of threatened and endangered species.”

Dusky gopher frogs are an endangered species that prefer longleaf pine habitat. Pony Ranch Pond is a major success story. “It took us years to get the pond right and we weren’t sure if the pond was right, and we did all the eco system restoration work around it, and the frogs actually traveled a mile and crossed a creek and made it up to the uplands. And they established their own population there,” said Ed Moody, with the U.S. Forest Service.

“As one of the world’s most biodiverse ecosystems, longleaf pine restoration continues to receive broad support and unprecedented collaboration, largely in part from the success of the Longleaf Stewardship Fund,” said Tony Tooke, regional forester with the U.S. Forest Service’s Southern Region. “The fund is a testament to what can be achieved when public agencies, private companies and other groups work together with a unified vision.”

With the addition of these accomplishments, NFWF’s Longleaf Stewardship Fund will reach a historic milestone, surpassing 1 million acres of longleaf pine restored or enhanced. “As our population expands, they need places to live and to build the next WalMart or strip mall, we lose ecosystem to development,” said Jimmy Mordica, with the U.S. Forest Service, “We did restoration, longleaf restoration on this site back in 2011. So you can see the growth of the young longleaf coming up behind us.”

The 24 projects awarded grants this year are expected to establish more than 13,300 acres and improve more than 270,000 additional acres of longleaf pine habitat across the longleaf pine’s historical range. Grantees will provide educational and technical assistance related to longleaf restoration to more than 5,500 private landowners, with an anticipated 360 landowners entering into stewardship programs on private lands.

“Restoring or enhancing 1 million acres of longleaf pine forest is no small feat, and the many public- and private-sector partners supporting the Longleaf Stewardship Fund should be immensely proud of reaching this remarkable milestone,” said Jeff Trandahl, executive director and CEO at NFWF. “The longleaf pine is an iconic and beloved tree throughout most of the South, and the forests these trees anchor represent some of our nation’s richest areas of biodiversity. Restoring these vital habitats at such a large scale could not be done without the cooperation and support of private landowners, federal agencies, military installations, private corporations and a coalition of conservation organizations.”

“The Longleaf Stewardship Fund is a model public-private partnership that demonstrates the power of cooperative action,” said Louis Bacon, founder and chairman of the Moore Charitable Foundation. “Together, our efforts to restore and enhance longleaf pine ecosystems are having a tremendous, measurable impact in protecting natural habitats, water quality, and plant and wildlife diversity. In my native state of North Carolina, our collaborative efforts will establish more than 900 acres of longleaf pine and enhance another 18,000 acres, which will pay huge dividends to local economies, parks and recreation areas, the environment, and public health.”

The fund combines the financial and technical resources of the funding partners to accelerate the restoration of the longleaf pine ecosystem, while implementing the Range-Wide Conservation Plan for Longleaf Pine as part of America’s Longleaf Restoration Initiative​.

“Together, with the help of private landowners, conservation partners and many other groups and companies, we’re making headway in reversing the decline of America’s longleaf pine forests,” said NRCS Acting Chief Leonard Jordan. “Partnerships like those funded through the Longleaf Stewardship Fund are critical to conserving this unique Southern landscape on both public and private lands, which benefits wildlife, natural resources and rural economies.”

“DoD’s partnership with the Longleaf Stewardship Fund provides wide-ranging benefits for national defense,” said Maureen Sullivan, deputy assistant secretary of defense for environmental safety and occupational health. “The Longleaf Stewardship Fund surpassing the impressive milestone of one million acres of longleaf pine restored or enhanced is a true win-win for conservation efforts and the military, helping to ensure the warfighter’s continued ability to test, train, and operate on military installations and ranges throughout the southeast. By partnering with the National Fish and Wildlife Foundation, approximately $11 will be spent by our partners for every dollar DoD spends, helping to establish 3,810 acres of new longleaf pine and enhance an additional 127,634 acres of existing longleaf pine in the vicinity of 7 important military installations.”

“We’re pleased to play a role in restoring a remarkably diverse ecosystem that is deeply connected to the culture and economic growth of our region,” said Southern Company Environmental and System Planning Vice President Jeff Burleson. “Through the landscape-scale conservation approach of the Longleaf Stewardship Fund, a wide range of plants and wildlife that depend on this critical habitat will benefit.”

“Promoting the sustainability of natural resources is a core part of Altria’s mission,” said Wendy Shields, manager of corporate citizenship for Altria client services. “By helping restore the longleaf forests, we are improving our communities while protecting the resources on which we depend.”

“Nearly 60 percent of the forests across the South are owned by family forest owners. These individuals want to do right by the land and help with conservation,” said Tom Martin, president and CEO of the American Forest Foundation. “We are proud to be a part of the Longleaf Stewardship Fund, to help these landowners overcome some of the barriers to forest management, in order to restore an ecosystem that is so critical to at-risk species.”

Since 2012, the Longleaf Stewardship Fund has invested more than $24.1 million in projects that will establish more than 75,600 acres, improve more than 1,050,000 additional acres of longleaf pine forest and benefit the native species that rely on those forests.

The grants awarded by the Longleaf Stewardship Fund in 2017 continue to build on the success of this public-private partnership, further expanding the longleaf pine ecosystem through collaborative and results-oriented actions.

The Nature Conservancy is the latest group to receive a grant to help restore the longleaf pines.

Chartered by Congress in 1984, the National Fish and Wildlife Foundation (NFWF) protects and restores the nation’s fish, wildlife, plants and habitats. Working with federal, corporate and individual partners, NFWF has funded more than 4,500 organizations and committed more than $3.8 billion to conservation projects.