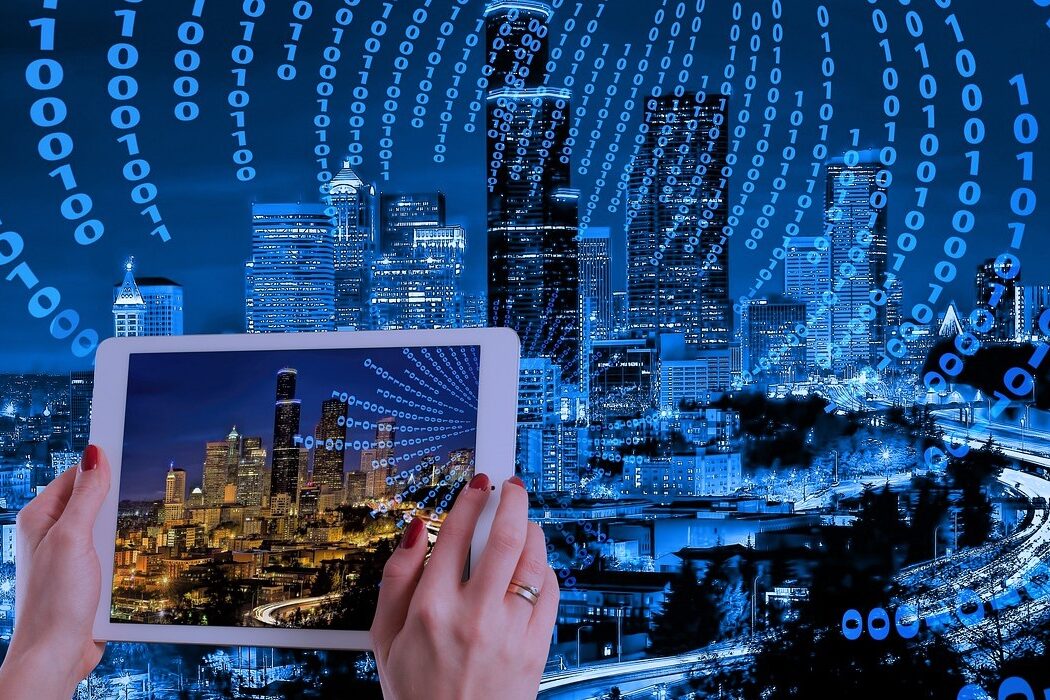 It’s said that Rome wasn’t built in a day and there’s a good reason. Cities are the most complex human-designed system on the planet. Today, 55% of the world’s population lives in urban areas, with 68% projected to live in urban areas by 2050. In the United States, the number is already at 83% and is projected to reach 89% by 2050.

As such, cities represent perhaps the most important opportunity for innovation and digital transformation for our entire society and the planet. Through this transformation, we can deliver an urban future that is more sustainable and resilient but also more adaptive. In this article, we explore why the smart cities concept is necessary, but not sufficient and three steps for achieving the adaptive city of the future – one which works for everyone.

Why smart cities are not enough.

While the concept of the smart city has long been the future vision for cities, even this is necessary but not sufficient.

Tech firms have long pitched the notion of intelligent sensors capturing billions of real-time data points to help cities become smart and able to respond to their surroundings.

Use cases have included self-driving cars, smart lighting, and even smart trash cans.

Sensors and data are indeed the building blocks, like cement, air, water, sand, and gravel are for concrete, but they represent raw ingredients, not the ultimate solution.

Why adaptive cities are the future. 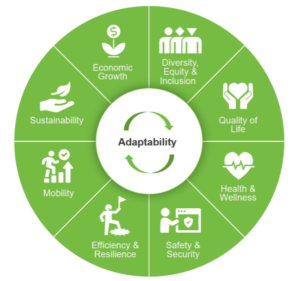 The smart cities concept is a helpful start, but the city of the future needs to go one critical step further. It needs to become an adaptive city able to respond dynamically to continuous change and disruption.

In recent years, disruption – in all its forms – has moved from the exception to the norm.

The smart city concept worked well for steady-state conditions, but in a world of continuous disruption, a key requirement for the city is to be able to respond to change and do so with intrinsic agility across both digital and physical aspects of its operating model. Agility in the digital ecosystem is nothing if the city remains brittle in its physical infrastructure.

An adaptive city balances lives and livelihoods, resilience and sustainability, and all the political, economic, social, technological, legal, and environmental conditions that need to be continuously analyzed and acted upon.

The path to the adaptive city is a multi-year journey. Like digital transformation, it can gain quick wins, so benefits are realized every step of the way.

Three key steps to implementation relate to establishing the vision, designing for adaptability, and then building for intrinsic agility.

1. Establish the vision for the adaptive city.

The vision for the adaptive city starts with its goals (figure 1). These are clearly different for each city.

For example, in the United States, Miami’s needs in terms of resilience are far different from those of Dallas.

Adaptability is key since it becomes an enabler to better support all goals. It means you can hit more of your goals more of the time for more of your stakeholders.

Dynamic curb management is one solution that enables city planners to smoothen the flow of traffic and deliveries at the curbside using dynamic, data-driven curb management policies to make roadways more efficient and equitable. Two-hour parking spaces can become three-minute loading zones or dynamically priced delivery zones based on time of day or other factors.

Since the business goals for the city are continuously changing, the adaptive city will need to support dynamic optimization of the goals themselves so that goals which are in mutual tension, such as traffic volume and CO2 emissions, can be pro-actively managed minute-by-minute.

To design for adaptability, it is important to focus the design on both digital and physical elements of the city’s architecture. Software adaptability can be accomplished with approaches such as cloud computing, AI, ML, digital twins, software-defined networks, smart contracts, and platform business models.

Physical adaptability can be accomplished with approaches such as modular design and construction, multi-functional design, robotics and drones, and techniques which support rapid integration and interoperability or dynamic provisioning. (table 1).

Examples include Ample’s robotic battery swapping stations which can swap out an electric vehicle’s battery modules and packs in 10 minutes. Then there is “plug and play urbanism” which takes elements such as pedestrian bridges and makes them moveable as needed. The City of Fort Worth improved the streetscape with a moveable bridge across an 80-foot-wide creek. On a larger scale, Qatar’s shipping-container football stadium can be taken apart and reassembled after matches.

Operational optimization in parking facilities means not only doing more with less (e.g. during the pandemic when demand was down by as much as 90%), but in finding alternative approaches such as converting garage levels to work-out facilities, providing space for pop-up retail, or staging areas for restaurant take-out and food deliveries.

This physical adaptability extends to specific assets in the built environment as well as entire structures. Multi-functional streetlights, such as those in the New Haven planned development community in Ontario, California, are equipped with USB charging ports, environmental sensors, Wi-Fi, wayfinding and more.

To build out or renew city infrastructure, these digital and physical enablers will provide much-needed intrinsic agility. By utilizing them during the construction or renovation process, there is adaptability by design for their entire operational lifetime. A timely example is microgrids that can react to shocks, like a self-healing organism, if part of the grid is damaged.

In terms of integration, it will be important to pursue a platform business model where intellectual property from startups and other constituents can plug and play into the platform’s services much like the Apple app store. The adaptive city may own and operate this platform as a public service, but it also enables permissionless innovation so that others, including citizens, can easily innovate and build on top.

It’s time to redefine the role of each asset from the buildings, roads, cars, and even the human role in the adaptive city.

As part of this journey, the natural environment needs to be more blended with the hard-built environment: blending the green and grey.

As a society, for too long, we have relied almost entirely on grey infrastructure without leveraging the benefits of the natural processes of green infrastructure, which has natural attenuators built in.

The adaptive city as a software company.

With so many technical building blocks enabling so many use cases for the adaptive city of the future, perhaps the main challenge will be in the governance and orchestration of the platform business model which brings all this to life.

At this point, the adaptive city will become its own software company – quite literally helping to make the world a better place.

Featured image by Gerd Altmann from Pixabay. Other images courtesy of WGI, Inc.